Artwork gifted to University of Otago 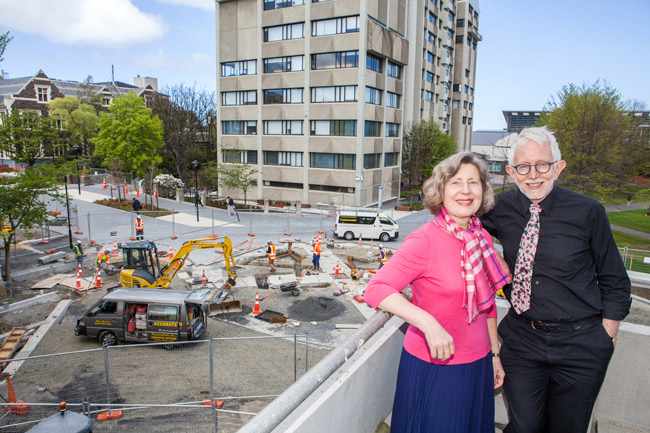 A large-scale artwork by renowned New Zealand sculptor Paul Dibble is being gifted to the University of Otago by the Stuart Residence Halls Council, to celebrate its 75th anniversary.

Council chairperson Dr Margot Skinner says the work Pathways will be literally under-wraps after it arrives in Dunedin later this month until its unveiling later this year. Invitations to that unveiling have been sent out.

The work will be installed at a busy pedestrian area at the junction of Union Walk and Castle Walk; near the Union Lawn, Clocktower quadrangle, Staff Club and Richardson Building.

The Council’s aim is to celebrate its anniversary in a way that would enhance the University campus with a feature everyone can enjoy.

As the University is in the middle of the central campus landscape project, that created an opportunity to install an artwork in the heart of the campus.

Dr Dibble, who is one of very few New Zealand sculptors to cast their own bronze works, was appointed Member of the New Zealand Order of Merit for services to the arts in 2002.

One of his notable commissions is the New Zealand War Memorial in London.

Southern Stand sits on a corner of London’s Hyde Park and was commissioned by New Zealand’s Ministry of Culture and Heritage. Unveiled in 2006, it is a collaborative work with architect John Hardwick-Smith (of Athfield Architects).

The Stuart Residence Halls Council launched an international search for artists then invited eight to present a concept design and short-listed four to provide a developed design, including a small scale model of an original work.

Subsequently, both the Council and University approved the design by Dr Dibble.

University of Otago Vice-Chancellor Professor Harlene Hayne says the generous gift of a potentially iconic work by a significant New Zealand artist is an outstanding contribution to the University’s strategic aim to provide outstanding campus environments.

The University is not only very proud of the heritage buildings that also play a major part in the campus environment but of its relationship with the Council, which has remained strong and vibrant during the past 75 years and has enriched the University on so many different levels.

About the Stuart Residence Halls Council

The Council, created to develop accommodation for University students, was formed in 1941 by the Reverend Dr Harold Turner, who was the assistant minister of Knox Church, which many students attended.

The Council opened Stuart House in Cumberland Street in 1941, for 29 men. When Arana was established for men in 1943, the Stuart House building became occupied by women. Stuart House closed in 1945 when the Council established Carrington as the first residential accommodation for both men and women.

By 2005 it was obvious students’ accommodation needs were well catered for so the Council sold the buildings to the University the following year, after deciding to focus on more general support for the University and students.

That has included gifting $1.6 million to the University to endow the Stuart Chair in Science Communication, which Professor Lloyd Davis holds. The gift was matched by the Government in 2007, through the public-private Partners for Excellence investment fund programme Leading Thinkers.

The Council also gifted $1.5 million for the Stuart Chair in Scottish Studies, which was matched by the Government under the Leading Thinkers programme. Professor Liam McIlvanney holds the inaugural Chair.

The Council has also provided funding to support visiting speakers in Science Communication, Scottish Studies, and the Centre for Theology and Public Issues. As well, the Council has provided a range of grants for students at Arana and Carrington, and to enhance the environment at the two Colleges.