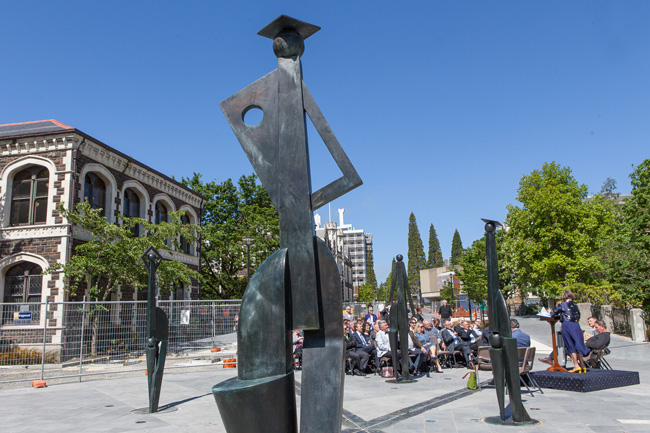 Pathways, by Dr Paul Dibble, was unveiled at a special ceremony on Friday. Photo: Sharron Bennett.

In a significant contribution to culture in Dunedin an artwork worth half a million dollars and standing up to 3.2 metres tall has been gifted to the University by the Stuart Residence Halls Council to celebrate its 75th anniversary.

Pathways, by internationally renowned New Zealand sculptor Dr Paul Dibble, is a stunning work which has been placed in a busy pedestrian area – at the junction of Union Walk and Castle Walk; between the Union Lawn and Clocktower Building. It was unveiled and gifted to University Chancellor Mr John Ward during a ceremony on Friday.

University of Otago Vice-Chancellor Professor Harlene Hayne says the gift of a potentially iconic work by a significant New Zealand artist is a very generous contribution to the University’s strategic aim to provide outstanding campus environments, and a salute to the country’s very accomplished arts community.

“The University is proud of the strong and vibrant relationship it has enjoyed with the Council during the past 75 years and grateful for the personal commitment the various members of the Council have volunteered over that period to enriching the University on so many different levels,” Professor Hayne says.

"The work includes five figures and a cross modelled on the national emblem of Scotland (the St Andrew’s cross). The artwork draws on Celtic, Scottish and literary elements that reflect the Stuart Residence Halls Council, along with local flora and fauna."

Council chairperson Dr Margot Skinner says the Stuart Residence Halls Council is a mix of ‘town and gown’, and was formed in 1941 by elders of Knox Church and the Reverend Dr Harold Turner.

He was assistant minister of Knox, which had many students in its congregation, and Knox Church itself was named after John Knox, who was considered the founder of the Presbyterian Church of Scotland.

The Council was created to develop accommodation for University students and opened Stuart House in Cumberland Street in 1941, followed by Arana and Carrington.

Dr Skinner believes the bronze sculpture the Council has donated to the University “is undoubtedly set to become a major cultural landmark at the University - one that students, staff and visitors can interact with every day as they walk across the campus.

“The work includes five figures and a cross modelled on the national emblem of Scotland (the St Andrew’s cross). The artwork draws on Celtic, Scottish and literary elements that reflect the Stuart Residence Halls Council, along with local flora and fauna.”

The sculpture’s five figures are purposely non-descript but have individual imagery: moving forward, putting your best foot forward, looking ahead, resolute and let us rejoice.

Dr Skinner says the aim of donating the artwork is to celebrate the Council’s 75th anniversary in a way that enhances the campus with a feature everyone can enjoy, and the Central Campus Landscape Project created an opportunity to install an artwork in the heart of the campus.

The Council’s vision was to donate a unique and iconic artwork, a statement piece that would portray the Council’s heritage and its strong association with students, while also highlighting the University as a Dunedin-based international centre of learning excellence.

The Council stipulated the artwork should have a strong connection with pedestrians as well, because people traverse the campus at that intersection.

After the Council launched an international search, it invited eight artists to present a concept design, then short-listed four to provide a developed design, including a small scale model. Both the Council and University approved the design by Dr Dibble.

Dr Skinner says it has been fun working with Dr Dibble and his partner in art and life Fran Dibble because they are both “very creative people who complement each other so well, and have worked tirelessly over the year to create the artwork.”

Dr Dibble says inserting sculptural people among real people seemed an interesting idea, and the cross ties the work together while also expressing links to the University, the area and the Stuart Residence Halls Council.

“The geometric figures are intentionally stylised, abstracted figures which use mathematical shapes – so legs are reduced to cones, heads to spheres, etc. This reducing means you have to develop a strong sense of balance and proportion.

“Interestingly, by reducing the forms, it gives them a strong sense of gesture and humanism. They reflect early works by the Cubist constructionists almost 100 years ago. This came about because of the huge social and technological changes taking place at this time. Our own time definitely has a parallel with this.”

Dr Dibble says the commission has been a terrific job and he particularly loves public commissions, “when works are going to be out as part of towns and cities, where people can interact and move through the work”.

That is very different to the historic concept of sculpture, “where it was as statuary on a plinth and inaccessible”.

The ability to walk through the sculptures at the University links the work to others Dr Dibble has created, including the New Zealand memorial Southern Stand in London’s Hyde Park.

In 1941, the Council opened Stuart House in Cumberland Street for 29 men. It was later occupied by women.

In 1942, the Council persuaded the University to buy Arana, the home of the late Sir James Allen, a politician and former University of Otago Chancellor and Vice-Chancellor. The University leased Arana to the Council, which closed Stuart House and opened Arana as a residence for men in 1943.

By 1945, the Council had become an incorporated society, and that year it also officially opened Carrington in Heriot Row, as the first co-educational student residence in Australasia.

In 1995, the University assumed responsibility for the financial management and day-to-day operation of Arana and Carrington, while the Council owned the buildings.

Because students’ accommodation needs were obviously well catered for, the Council sold the buildings to the University in 2006, after deciding to focus on more general support for the University and students.

That has included gifting $1.6 million to endow the Stuart Chair in Science Communication, which Professor Lloyd Davis holds. The gift was matched by the Government in 2007, through the public-private Partners for Excellence investment fund programme Leading Thinkers.

The Council also gifted $1.5 million for the Stuart Chair in Scottish Studies, which was matched under the Leading Thinkers programme. Professor Liam McIlvanney holds the inaugural Chair.

The Council has provided funding to support visiting speakers as well (for Science Communication, Scottish Studies, and the Centre for Theology and Public Issues), a range of grants for students, and has enhanced the environment at Arana and Carrington Colleges.