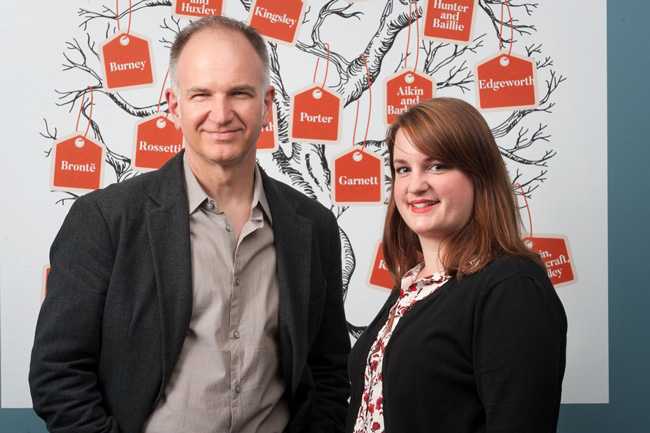 Weekly tours through the University’s latest Special Collections exhibition will offer visitors a chance to hear some of the more complex stories of the literary families on display.

Keeping it in the Family: British and Irish Literary Generations 1770-1930 opens at the de Beer Gallery in the University’s Special Collections today and runs through to 17 March. Next Thursday (15 December) and each Thursday after New Year the curators will offer a 45-minute tour at 1pm. This is the first time Special Collections has offered a weekly tour at a set time.

Senior Lecturer Thomas McLean and Postdoctoral Fellow Ruth Knezevich, both of the Department of English and Linguistics, co-curated the exhibition which highlights the role of family in creative production in nineteenth-century Britain and Ireland. It features a treasure-trove of works, including manuscript letters, illustrated editions and even a comic book.

“There’s a letter written by Charles Darwin; an early edition of Wordsworth’s poems that was probably owned by a descendant of the poet; two beautiful volumes by Christina Rossetti with illustrations by her brother, the Pre-Raphaelite artist Dante Rossetti; and a volume of poems written by Lady Jane Wilde, with a lovely dedication to her two sons—one of whom was Oscar,” Dr McLean says.

"The exhibition captions only allow a few brief comments about each object, so we’re looking forward to telling some of the more complex stories—some of them scandalous, some thought-provoking—on our tours."

But for him, one of the most exciting documents in the exhibition is one of the smallest: a slip of paper in the hand of Branwell Bronte—the brother of sister novelists Charlotte, Emily and Anne.

“It was lent to us by the Dunedin Public Library, and it’s extremely rare to have a document so closely connected to Britain's most famous literary family.”

Keeping it in the Family is the most public element of Dr McLean’s Marsden-funded research project which examines the lives and works of nineteenth-century British novelists Jane and Anna Maria Porter and their brother, the artist and traveller Robert Ker Porter – a family that was quite famous 200 years ago, in the era of Jane Austen and Lord Byron.

“The issues I’ve been exploring in relation to the Porters—family responsibility versus artistic ambition, sibling collaboration and rivalry, the impact of the British Empire on familial relationships—are also present in better known literary families like the Brontes, Rossettis, or Kiplings.”

It is some of these stories that Dr McLean and Dr Knezevich are looking forward to sharing on the weekly tours.

“The exhibition captions only allow a few brief comments about each object, so we’re looking forward to telling some of the more complex stories—some of them scandalous, some thought-provoking—on our tours. And I’m thrilled that we’ll get to do a few tours when the students are all here.”

The tours are an experiment. Special Collections usually offers tours only when a group of visitors asks for them.

Dr McLean says putting the exhibition together has been a “learning experience”, and he and Dr Knezevich have been extremely grateful to Dr Donald Kerr and Romilly Smith in Special Collections.

“They are patient, knowledgeable, and enthusiastic. I’ve learned about literary families that were almost unknown to me previously, and I’ve enjoyed the challenge of writing and planning for a wide public audience.”

Or join a tour: