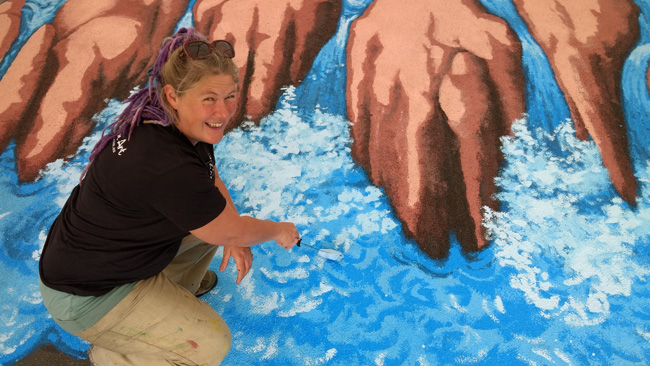 The artist behind the incredible 3D road crossings currently taking shape outside the University’s School of Business Building on Clyde Street says she’s having a fantastic time working on the project.

The first, at the intersection of Clyde Street and Union Street East shows feet walking under zebra stripes. The second, slightly further down the street towards the Leith River, looks like a river with stepping stones. 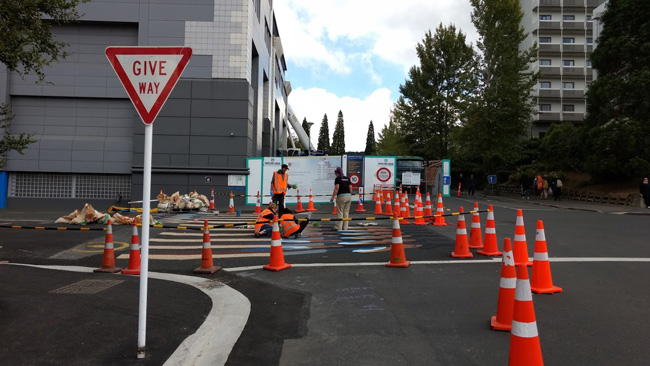 An illusion: The crossing will be flat to pedestrians, but will look three-dimensional to approaching traffic.

The crossings are designed to look flat to pedestrians crossing the road, but three-dimensional to approaching traffic. They are being created to extremely high safety specifications using products and paint produced by Resin Surfaces, a New Zealand surfacing company that provides environmentally friendly surfacing solutions. They will not be slippery for either pedestrians or vehicles.

Ms McCracken flew into Dunedin last Thursday and began work almost immediately. Since then she has barely paused – taking time out just to eat and sleep.

“I began work at 10.30am yesterday, and didn’t finish until 4.30am this morning,” she laughed when visited by the Bulletin Board on Thursday. “Then I started again at 10.30 this morning.”

The hard work is paying off though – the crossings are beginning to look incredible. 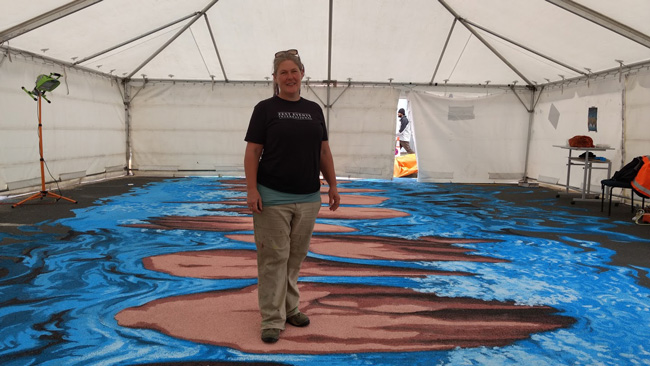 A marquee was erected across the street to protect the river themed work while it was completed. The street was at the wrong angle for a second marquee at the other crossing.

Ms McCracken has painted 3D art for large corporate promotions including for Nike and the Commonwealth Bank. She has won numerous awards for her work – including first prize at the 2015 World Street Painting Festival in the Netherlands. Last year she was the guest artist of the Dubai Government at Dubai Canvas.

Here on Clyde Street, Ms McCracken is being helped by a small team of local assistants including local artist Guy Howard-Smith, staff from Resin Solutions and two Downer staff.

Dunedin City Council Team Leader Urban Design Crystal Filep who has coordinated the project is also helping to paint. “I do watercolour painting myself, and this is a great combination of artistry and road safety,” she says. Also helping is Julia vom Horfe of Germany, who is on holiday in Dunedin, and is thrilled that she will literally leave her mark on the city. 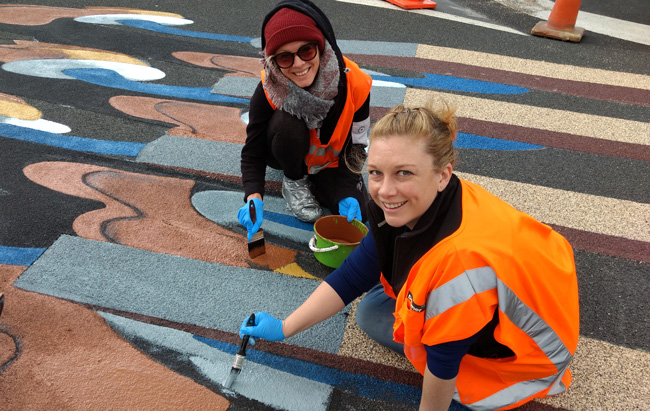 “It’s a nice feeling when everyone on a team knows what they are doing and communicates well,” she says. “I’m having a great time. It’s really satisfying and so much fun.” 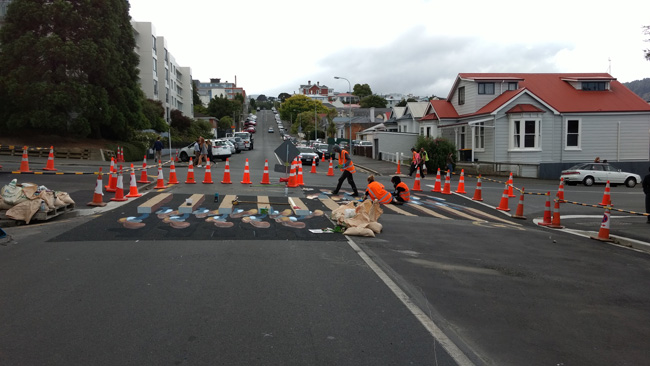 Ms Filep says these two crossings are a trial, and if they are well received the Council will consult with the community about painting more 3D crossings around the city.