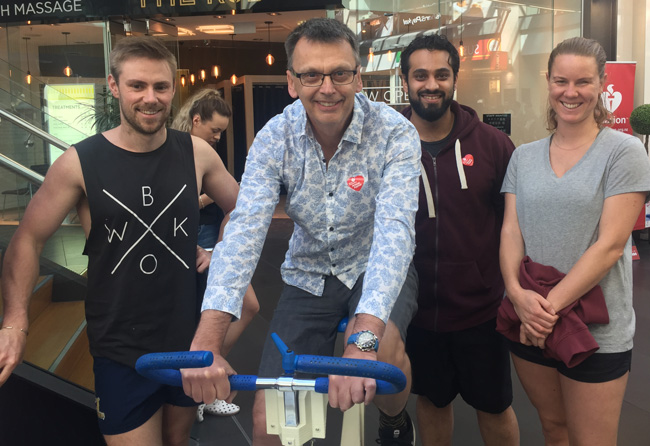 The Department of Physiology has once again raised significant funds for a charity close to its heart.

It saw about 40 teams from Otago departments and Dunedin businesses pedalling to clock up as many kilometres as possible in 10 minutes on an exercise bike. Those kilometres were then added to a map of New Zealand to try and “cycle” from Dunedin to Haast.

"It was also a great way to raise awareness of heart disease - having people doing exercise over the three hour period!"

One of the organisers, Physiology Departmental Administrator and PA to the Head of Department, Tracey Fleet says this year’s event was held to coincide with the Heart Foundation’s Annual Appeal day and was once again very popular.

“We have a good relationship with the Heart Foundation and our Department has been fortunate to gain a lot of funding from them over the years, so we were happy to help,” Mrs Fleet says. “It was also a great way to raise awareness of heart disease - having people doing exercise over the three hour period!”

In addition, Physiology PhD student Lorna Daniels attempted her own challenge – to do 1,000 burpees over the course of the event.

“It added a real buzz to the event, and she did it in just under three hours - an incredible achievement.”

Currently the event has raised around $2,500, with a final tally to be calculated in several weeks once all of the donations are in. If you would like to donate go to: https://give.everydayhero.com/nz/south-island-cycle-challenge-2017

About the Heart Foundation:

The Heart Foundation has invested more than $55 million into research and cardiology training since 1970, with the Department of Physiology having many researchers who have been recipients of this funding.

Heart Disease is New Zealand’s biggest killer, responsible for the deaths of more than 6000 Kiwis every year. New Zealand women are 4.6 times more likely to die from heart disease than breast cancer.