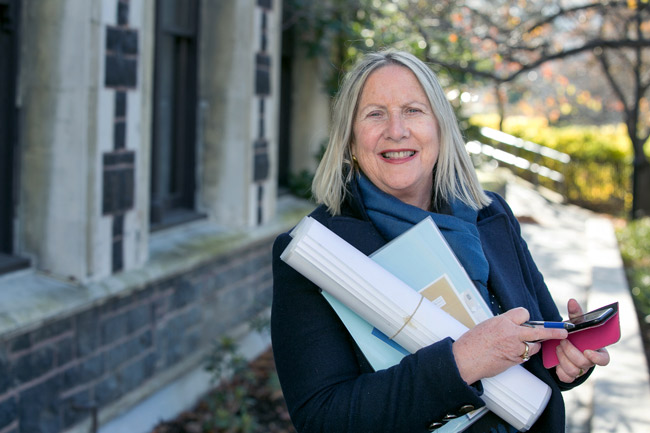 A year of activities is planned for the University of Otago’s 150th celebrations in 2019 – aiming to involve everyone from students, staff and alumni, to the wider Dunedin community, and those around New Zealand and the world.

While even the first event is still more than 18 months away, planning has begun in earnest – with the University appointing a Project Coordinator working within the Development and Alumni Relations Office, to guide and oversee the celebrations.

The vastly experienced Kerry Buchan took up the role earlier this year – and says she is “very excited” to be involved in such an important milestone for the University.

Kerry describes herself as “an events organiser even before such a job title existed.” She holds more than 30 years’ experience in event coordination, and has an exceptional range of established networks. Her work has included in excess of 100 major academic, civic, medical and corporate conferences and a host of festivals, symposiums, anniversaries and reunions.

"Having an idea is easy. Executing the idea is the difficult part."

Alongside this experience, she also cares passionately about the University.

She is an Otago graduate, alongside her father, uncles, brothers, sisters, husband and three of her four sons. (Number four will likely study at Otago in 2020.) It was at Otago that she met her late husband Glenn “Buck” Buchan - a leading immunologist based in the University’s Department of Microbiology and Immunology.

Kerry brings warmth, forward thinking and optimism to this role – and stresses she is a “curator” of the 150th celebration events, not “organiser”. Her part-time, three-day per week role is one of “encouraging, facilitating, giving an overview, and coming up with a cohesive calendar.”

Right now Kerry is trying to speak to as many people as she can, getting ideas and feedback, and encouraging people to come up with their own events.

“Having an idea is easy,” she says. “Executing the idea is the difficult part.”

What the 150th year will involve

The 150th celebrations will see a series of “hero events” held throughout the year, beginning with a town and gown picnic on campus on 25 January 2019.

Over Queen’s Birthday weekend in June 2019, celebrations will be held to mark 150 years since the signing of an ordinance in 1869 to establish the University of Otago.

There will be several “homecoming weekends” in April and August for people to return to the University and retrace their steps with friends, and the year will end with a closing programme.

Other events throughout the year will cover a range of sporting, cultural and ceremonial genres – including:

Events will also be held on the University’s other campuses, and at other locations around the globe.

Kerry says that people are being encouraged to organise their celebrations around the main “hero events” – so that each major event has a series of smaller concurrent events associated with it.

"We have to look at it holistically and have it carefully planned."

For her it is important that the year isn’t a “mish mash” of events.

“We have to look at it holistically and have it carefully planned.”

Kerry is based in the University’s Development and Alumni Relations Office on Tuesdays, Wednesdays and Friday mornings.

While undertaking her role at Otago, she will also continue her part-time role as Orokonui Ecosanctuary’s Marketing Manager - a cause she is passionate about as one of Dunedin Wildlife Trust’s founding trustees.

A quick history of Otago

The University of Otago, founded in 1869 by an ordinance of the Otago Provincial Council, is New Zealand’s oldest university.

The new University was given 100,000 acres of pastoral land as an endowment and authorised to grant degrees in Arts, Medicine, Law and Music.

The University opened in July 1871 with a staff of just three Professors, one to teach Classics and English Language and Literature, another having responsibility for Mathematics and Natural Philosophy, and the third to cover Mental and Moral Philosophy and Political Economy.

The following year a Professor of Natural Science joined the staff. With a further endowment provided in 1872, the syllabus was widened and new lectureships established: lectures in Law started in 1873, and in 1875 courses began in Medicine. Lectures in Mining were given from 1872, and in 1878 a School of Mines was established.

Last year the University had 18,547 Equivalent Full-time Students (EFTS) – from more than 100 countries across the globe.

Do you wish to discuss an idea for a 150th event?