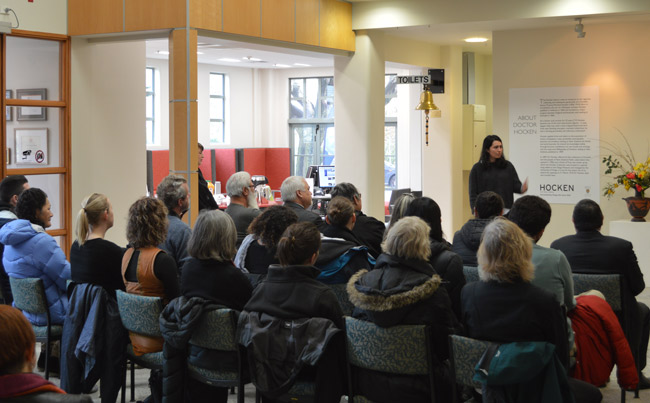 The national theme for the week this year is “Kia Ora Te Reo Māori”, chosen to celebrate New Zealand’s indigenous greeting, and for its exact description of the intent of the new partnerships for te reo Māori revitalisation between the Crown and Māori under the new Māori Language Act 2016.

The University of Otago is reflecting that theme by promoting rangahau Māori (Māori research) – in particular postgraduate Māori research, with displays in each of the University’s libraries and research presentations at the Hocken.

"Supporting research is a big part of our mahi at the Hocken and across the libraries, and this is one way we can contribute to Te Wiki o Te Reo Māori and the promotion of student and academic success.”."

Yesterday’s launch began with a korero from Te Koronga researcher Ngahuia Mita, who graduated last year with a Master’s degree in Physical Education from the School of Physical Education, Sport and Exercise Sciences, then travelled to Antarctica with Professor Christina Hulbe, Kelly Gragg and Michelle Ryan under the Ross Ice Shelf Programme.

Her korero was complemented by the launch of an exhibit in the Hocken Foyer celebrating Māori and Polynesian voyagers to Antarctica. A big part of the display highlights Dr Louis Potaka, the fifth Māori medical graduate in New Zealand who studied at Otago and then served as doctor for Rear-Admiral Richard Byrd’s second Antarctic expedition in 1934.

Along with the Hocken exhibit, library displays include Wayne Te Kaawa’s PhD research on Christology through a Māori lens (Central Library), Lou Kewene’s research Nau Mai, Haere Mai, Joe Brown presents… (Robertson Library), and research posters by students of Te Koronga, a Māori research excellence programme led by Drs Anne-Marie Jackson and Hauiti Hakopa (Science Library). The Health Sciences Library has student research on display and the Law Library display celebrates the relationship between Sir Apirana Ngata and Sir Robert Stout. All displays will be up during Māori Language Week, some for a few weeks.

Hocken Kaitiaki Mātauranga Māori Jacinta Beckwith says it is the Library’s privilege and pleasure to connect and collaborate with all of these researchers.

“We thank them for giving us the opportunity to hear about the amazing mahi they do. Supporting research is a big part of our mahi at the Hocken and across the libraries, and this is one way we can contribute to Te Wiki o Te Reo Māori and the promotion of student and academic success.” 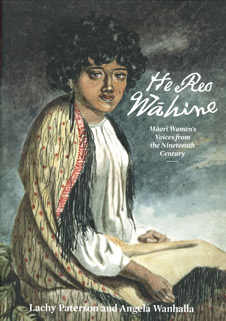 The cover of He Reo Wāhine: Māori Women's Voices from the Nineteenth Century, which will be launched tomorrow.

The pair collaborated to write He Reo Wāhine: Māori Women's Voices from the Nineteenth Century – showcasing the experience of Māori women in colonial New Zealand through Māori women’s own words – the speeches and evidence, letters and testimonies that they left in the colonial archive.

Associate Professor Wanhalla says they wanted to challenge the idea that Māori women were silent in the past and that they did not leave any sources from which to explore their historical experience during the colonial era.

In reality, during the 19th century, Māori women produced letters and memoirs, they wrote off to newspapers and commissioners, they appeared before commissions of enquiry, gave evidence in court cases, and went to the Native Land Court to assert their rights.

“There are few book-length studies concerned specifically with Māori women’s history, and no comparable books that look at Māori women’s voices in the 19th century. We felt that a book that focused solely on Māori women’s views, feelings and desires was long overdue,” Associate Professor Wanhalla says.

"There are few book-length studies concerned specifically with Māori women’s history, and no comparable books that look at Māori women’s voices in the 19th century."

She says they discovered over 500 texts in both English and te reo Māori, written by Māori women themselves, or expressing their words in the first person, and drew upon a selection of these for the book.

“In bringing to light women’s words, we see how they engaged with the state and its institutions in order to protect their interests, and how colonialism worked and operated more generally in their lives.”

Associate Professor Paterson says some historians have suggested that it is "too hard" to do Māori women's history, or that there is nothing much in the archives.

“We hope that this book has shown that this is not true, and that more scholars will feel comfortable exploring this field of history.”

“Angela is an expert in women's history and Māori history. My particular expertise is in Māori-language texts. We both spent considerable time in the archives identifying material for the book. We had our own draft chapters that we concentrated on, but we then worked on these together to produce a coherent final product.”

He says they chose Te Wiki o te Reo Māori to launch this book because a number of texts included are in te reo Māori as well as English.

He Reo Wāhine will be launched at Hocken Collections tomorrow, at 5.30pm.