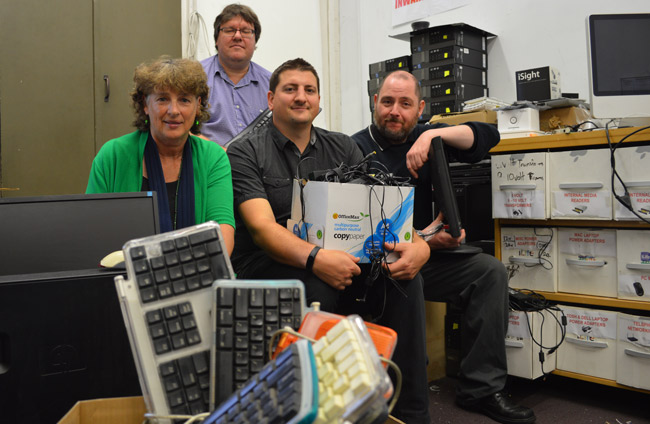 ITS Manager of Desktop Support Philippa Hawker (left) with ITS Desktop Support Specialists Simon Høgh and Matt Hall, and Dave Rae at the University's E-Waste and E-Cycle Centre.

Otago’s E-Waste and E-Cycle Centre is saving the University significant money each year, greatly reducing the amount of waste it is sending to landfill, and is also helping community groups gain access to computers.

The Centre, located in the ITS Building over the Leith, was established in 2014 to help departments dispose of their old computers responsibly – rather than stockpiling them or throwing them into skips – a move that strongly aligns with the University’s Sustainable Strategic Framework goal of becoming a zero waste institution.

To use the service, departments complete a Property Services request online and their equipment is collected and delivered to the Centre.

ITS Manager of Desktop Support Philippa Hawker says PCs, Macs, LCDs and hundreds of cables, adaptors and peripherals are all re-homed on campus every year.

“An example of value created is that we reused 118 monitors on campus in 2017,” she says. “The retail price of a 22 inch monitor is $193 so we added a value of approximately $22,774 by off-setting a potential purchase for the University.

“We also recycled 214 desktops and 35 laptops internally. This provided additional IT resources to staff and postgraduate students, and if entry level devices had been purchased instead it would have represented a cost of approximately $225,032.”

Mrs Hawker says the Centre received 2154 items for recycling and disposal last year, and already this year has received more than 750 items.

Any computers that are still in good condition, but unusable by the University are securely erased, and recycled back into the community. The impact they have made is impressive.

Pupils from George Street Normal School, which received computers from the Centre in 2016, say they have made a huge difference to learning.

In a letter written “to the University that gave us the computers” one pupil thanks Otago for the computers, and says they mean more pupils can use technology more often to access learning websites.

The Centre is also credited with helping Dunedin and wider southern districts search and rescue operations by providing re-purposed computers to Land Search and Rescue (LandSAR).

"I am proud of the team effort and the service we provide."

Mrs Hawker says while it has been wonderful providing computers to charitable organisations, the greatest benefit is to the University.

“I am proud of the team effort and the service we provide.”