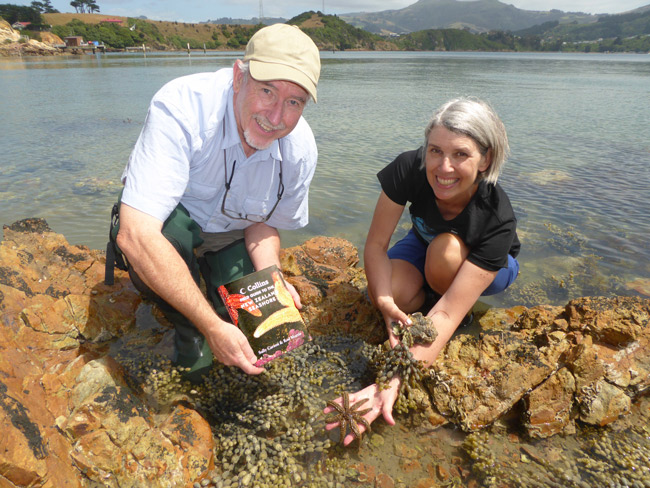 The Director of the University of Otago’s New Zealand Marine Studies Centre Sally Carson (right) and wildlife photographer Rod Morris with their book the Collins Field Guide to the New Zealand Seashore which has just been named at 2018 Storylines Notable Book.

A book written to encourage New Zealanders to explore tidepools and mudflats has been named a 2018 Storylines Notable Book.

The book, which features images taken by wildlife photographer and documentary-maker Rod Morris, aims to help people identify more than 350 species living in New Zealand’s intertidal zone and teach them about how each survives.

"It is an honour to be recognised, especially when I look at the calibre of the other books on the list."

She says having the guide named as a Notable Book is a massive achievement.

“Although the book is not specifically written for children, they were definitely one of our main target audiences. We are excited to hear that schools, families and children of all ages are reading it.”

Storylines has produced the Notable Book list annually since 1999, showcasing the most outstanding books for children and young people published in New Zealand by New Zealand authors and illustrators during the previous calendar year.

The Collins Field Guide to the New Zealand Seashore made the Non Fiction list alongside New Zealand’s Great White Sharks: How science is revealing their secrets by Alison Balance, Aotearoa: The New Zealand Story by Gavin Bishop and a number of other top reads.

“It is an honour to be recognised, especially when I look at the calibre of the other books on the list,” Ms Carson says.

The guide was launched at the University’s Marine Studies Centre and Portobello Marine Laboratory – where many of the photos were taken - late last year.

A passion for the seashore

Ms Carson is passionate about her book and says that while 75 per cent of New Zealanders live within 10km of the shoreline, few could name more than a handful of the common species that live between the tides.

She hopes her guide is helping people to "dive a little deeper" and learn more about the unique intertidal environment.

“The zone between the tides provides a glimpse into the marine world that is accessible by all, but is also vulnerable to impact from our activities,” she says.

Ms Carson has been involved in marine education for many years – with a focus on engaging schools and the wider community in caring for the coastal environment. A few years ago, she led the development of seashore identification guides – which have been extremely popular in providing an introduction to the seashore; she also designed a national citizen science project on long term monitoring of the New Zealand seashore, Marine Metre Squared – a project that encourages schools, families, communities and iwi to participate in collecting data about the biodiversity, distribution and abundance of marine species.

In recognition of these and other initiatives, Ms Carson was last year jointly awarded the University’s Award for Exceptional Performance by a Member of General Staff, together with Sze-En Watts, the Manager of the University’s Volunteer Centre.

“I had just been accepted into pharmacy but I was captivated by the underwater world, and blown away by how little I knew. So I switched to Marine Science.”