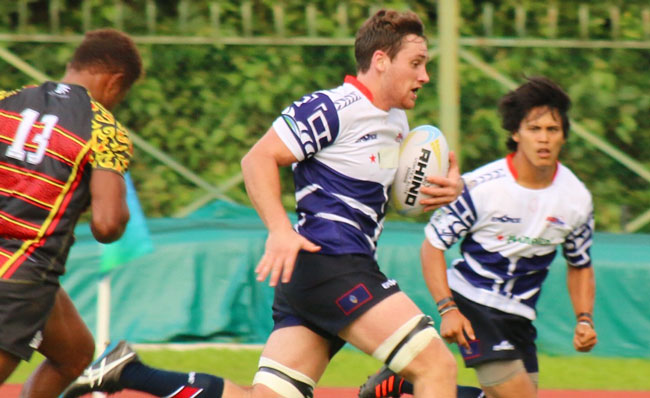 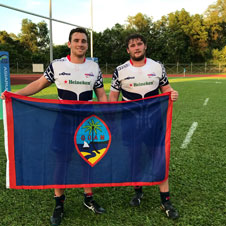 For most students, crisp mornings and falling leaves signal the time to hunker down and get their assignments done, but this April saw Law and Commerce student Cory Morrison preparing for a different kind of test, this one in the heat and humidity of the tropics: international test match rugby.

We are not talking about the All Blacks, but the 'Flying Proas' – the national rugby team of the tiny territory of Guam. A proa is a Micronesian sailboat.

“I was born and raised in Guam, a Pacific island in Micronesia, known for being next-door to the Marianas Trench and often in the news for being under threat from North Korea due to the US military’s large involvement on the island,” explains Chris.

Along with his older brother Josh, Cory was selected to represent Guam at the Asia Rugby Championship Division III East tournament in Brunei. There they would play the hosts and the other divisional member, China.

On the first Sunday in May, Cory took a break from his tax law readings and flew in to Brunei with his brother to meet their fellow Flying Proas, leaving just a day to prepare for the team's first game, against Brunei.

They faced an entirely different prospect to Saturday morning rugby on a frosty Logan Park.

“We played in sweltering 32-degree heat. We beat Brunei 66 – 12 but lost nearly four kilograms in sweat while doing so. We had one day of rest before the next test. The quick turnaround meant we were drinking over 10 bottles of water per day to rehydrate and recover in time to face China.”

Naturally China would be a tougher proposition. After all, its population is over 8,000 times the size of Guam’s 160,000 people.

Cory’s kiwi dad moved to Guam in 1992 to start a heavy machinery business with his brother. His mum taught at local schools before starting her own business importing Australian and New Zealand wines.

When Cory turned 13 he followed his older brother to boarding school in Cambridge, before heading further south to the University of Otago, where his younger sister has joined him. He still calls Guam home though, and proudly so.

“To play for Guam was an unforgettable experience; playing international test match rugby for your country is something not many get the opportunity to do. There are many young Guamanians spread throughout NZ, so hopefully my brother and I have paved the way for young athletes coming through to embrace their roots and, if an experience like this comes around, to grab it with two hands.”

The Flying Proas certainly took their chances against the Goliath of the division. “China were a well drilled side but we managed to grab some opportunist tries early in the match to run away with a 31-0 lead at halftime. We won the match 55-12.”

Now back in the early frosts of Dunedin, Cory is looking forward to playing in the Premier squad of the Otago University Rugby Club, which he has played for since his first year in 2015.

He has some law tests to prepare for too, but fortunately in somewhat less than 32-degree heat.