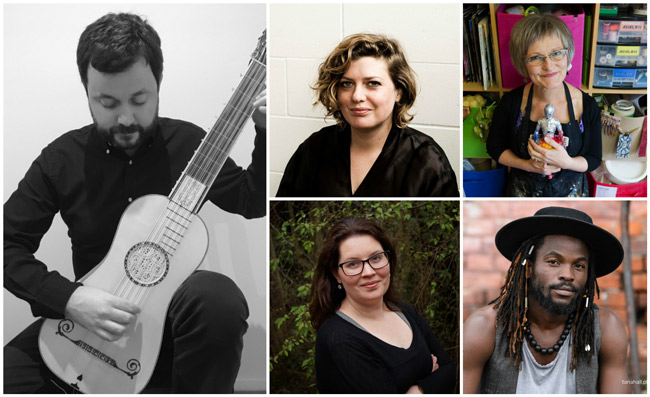 Artists, writers and performers at the forefront of their craft are set to take up University of Otago Arts Fellowships in 2019.

Pro-Vice-Chancellor Humanities, Professor Tony Ballantyne says each has been selected from a very competitive field of applicants.

The Frances Hodgkins Fellow is Imogen Taylor, the Robert Burns Fellow is Emily Duncan, the Caroline Plummer Fellow in Community Dance is Antonio Ssebuuma, the Creative NZ/University of Otago College of Education Children’s Writer in Residence is Fifi Colston, and Dylan Lardelli returns as the Mozart Fellow for a second year.

"The University treasures these Arts Fellowships because they are a vital link to our arts communities, to our city, and the broader public."

"The University treasures these Arts Fellowships because they are a vital link to our arts communities, to our city, and the broader public.

“Through their creative work and their presence on our campus, the Fellows open up new possibilities and initiate important discussions about how these creative traditions illuminate our society and what it means to be human,” Professor Ballantyne says.

The Fellows receive a stipend for between six months and one year, and space on campus to pursue their creative projects. Past Fellows have created dance performances, orchestral compositions, poetry, novels and children’s books during their time.

The Fellowships have been held by many of New Zealand’s greatest creatives over the years, including Ralph Hotere, Janet Frame, Anthony Ritchie and James K. Baxter.

“It is especially exciting to look forward to 2019, the year of the University’s 150th anniversary, and to contemplate the words, images, music, and performances these Fellows will create and share with us,” Professor Ballantyne says.

After holding the McCahon House Artists’ Residency in 2017, working as a studio artist at Corban Estate Art Centre, and having two successful solo shows at both Artspace and the Michael Lett gallery, in Auckland, in recent years, she is looking forward to developing a “substantial body of work” towards her first significant solo exhibition in the South Island.

"I’ve always come away from Dunedin feeling particularly enriched by the art and music scenes, which are unlike anything else in New Zealand."

She feels “amazed” to have been awarded such a prestigious Fellowship and is looking forward to relocating to Dunedin.

“I’ve always come away from Dunedin feeling particularly enriched by the art and music scenes, which are unlike anything else in New Zealand.”

Since graduating from the Elam School of Fine Arts in 2010, she has become known for the flattened geometric configurations of her paintings. Her work has primarily focused on balancing abstraction and representation, referencing Modernist art movements such as Cubism and the Bauhaus, and New Zealand Regionalism.

“I’m at a really exciting point with my painting where it’s increasingly intersecting queer theory, modernism and process-driven abstraction. I’m intending to explore these collisions further, utilising the resources of Otago University and collaborating with local architects and artists,” she says.

The award-winning playwright, based in Dunedin, first started writing for theatre in 1999.

"It will be marvellous to have the space and security to concentrate on my work in a university environment, which will serve my proposed projects immensely."

Her recent work includes Hold Me (BATS theatre, September 2016), Shaken (2016 Wellington Short + Sweet Festival), and Fallen Angels (Young and Hungry 2017 Festival of New Theatre). She was the St Hilda’s Collegiate Inaugural Artist in Residence (2017) and in this role, she wrote the play In Our Shoes, which was shortlisted for the Adam NZ New Play Award in 2018. Eloise in the Middle (winner Playmarket Plays for the Young 2013) was to be produced at the Fortune Theatre in September 2018.

She says it is “wonderful” to be named as the 2019 Burns Fellow and feels honoured that her name will be added to the list of literary luminaries who have held it before.

For the Fellowship, she has three projects on the go: a playscript about Emily Siedeberg and Ethel Benjamin, commissioned by the University of Otago for its 150th celebrations; writing two follow-up seasons of the Dark Dunedin podcast, which was released in March; and, finally, she will make a departure from her playwriting to work on a book.

“People have been urging me to write this for a while, and now I’ve found my angle and the timing is right,” she says.

“It will be marvellous to have the space and security to concentrate on my work in a university environment, which will serve my proposed projects immensely.”

As the current Mozart Fellow, he has spent the past year presenting several concerts at the Dunedin Public Art Gallery as well as giving lectures about his work at the University and talks during OUSA’s Art Week.

"I'm particularly looking forward to meeting more local musicians, and getting to know their work, with the intention of working together longer term."

Previously, he has been composer in residence with the Auckland Philharmonia Orchestra, and artist in residence in Tokyo. His compositions have been programmed in leading festivals and concert series in New Zealand, Australia, Europe, the United Kingdom, the USA, and Asia. His works have been performed by such noted ensembles as the New Zealand Symphony Orchestra, the Ensemble Vortex, the NZTrio, and by members of the Ensemble Modern and Musikfabrik.

As a guitarist, he has performed with the NZ Symphony Orchestra, the Stroma Contemporary Music Ensemble and the 175 East New Music Ensemble. Most recently, along with his work in Dunedin, Dylan has presented solo recitals in the United Kingdom, and presented new works for Baroque instruments, including Baroque guitar, in Melbourne.

He is looking forward to the second year of the Fellowship having spent the past year getting to know Dunedin, its venues, artists and people.

“I'm particularly looking forward to meeting more local musicians, and getting to know their work, with the intention of working together longer term,” he says.

With more than 16 years of dance experience as a performer, teacher, choreographer, community arts practitioner, and director of arts initiatives, Antonio Ssebuuma has had the opportunity to work in diverse cultural, artistic and social contexts.

"It is a very uncommon opportunity getting someone all the way from Kampala, East Africa, to Dunedin, in the far south of New Zealand."

Throughout his career, he has sought to engage and empower communities, including working with disadvantaged communities, in slums and orphanages in Uganda, Europe and New Zealand.

He describes his appointment to the Fellowship as a “landmark” in his career which fills him with “great joy and faith”.

“It is a very uncommon opportunity getting someone all the way from Kampala, East Africa, to Dunedin, in the far south of New Zealand. It confirms how the Fellowship walks the talk, and I am going to give it my best execution to give more pride to the name.”

The self-described dance-nomad, says he will spend the year on a project which aims to bridge communities in Dunedin and integrate his dance experience into institutional settings.

“I hope to pave new ways for collaborations and partnerships as I bring together people of diverse backgrounds into a safe space to build mutual relationships and networks. I hope that my project will be an inspiration to many and create reference in various ways.”

She is an award-winning junior fiction novelist, children’s book illustrator, and non-fiction author.

"I have been playing with an idea for some time that encompasses the main strands of my creative career; writing, illustration and wearable art."

Many will know her from her time as arts and crafts presenter on TVNZ’s What Now and The Good Morning Show. Her talent has also seen her work with Richard Taylor’s Weta Workshop, Peter Jackson’s Stone Street Studios, Pukeko Pictures and The Production Shed as a costumier, puppet maker, illustrator and crafts expert.

She feels “incredibly honoured” by her appointment and is ready to embrace the opportunity it presents.

The Fellowship will enable her to work on a young-adult book “with an illustrated difference”.

“I have been playing with an idea for some time that encompasses the main strands of my creative career; writing, illustration and wearable art. I find I cannot comfortably forsake one passion for another and neither can my protagonist,” she says.

Along with providing the “absolute luxury” of being able to create a major work without having to worry about how to pay the bills, she is looking forward to getting to know the Otago area, and accessing relevant research which is only available at the University.