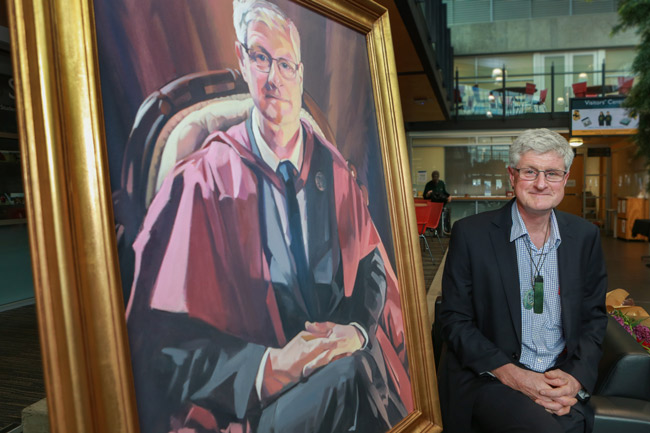 Professor Peter Crampton says having his portrait painted was a surprisingly enjoyable experience.

The portrait was unveiled at a gathering at the Hunter Centre yesterday to celebrate Professor Crampton’s contribution to the Otago Medical School (OMS) and the Division of Health Sciences at the University of Otago.

He says the Christchurch-based artist, John Gillies, who painted the large piece is a very “lively character”, who has had a career in medicine, plays in a rock band and is a great raconteur. As a consequence, the portrait sittings passed quickly.

"Their presence underscores the phenomenal development in medicine, and the aura of each emphasises each indvidual’s legacy in leadership and development that they generously gave to the School."

Professor Crampton says he’s happy with the outcome and hopes others will be too.

The portrait will hang in the Barnett lecture theatre along with portraits of other past Deans of the OMS.

Dr John Adams, President of the Otago Medical School Alumni Association, says the portaits “remind us of our values and traditions”.

“They preside over continued excellence in our scholarship,” he says. “Their presence underscores the phenomenal development in medicine, and the aura of each emphasises each indvidual’s legacy in leadership and development that they generously gave to the School.

“They are a gathering of hugely impressive people, and their gaze connects ongoing cohorts of medical students to role models they can aspire to.”

Dr Adams says Professor Crampton has truly earned his place in the gallery.

Professor Crampton described the time he spent as PVC and Dean as a “tremendous time of opportunity and of enjoyment”.

He acknowledged the effort and commitment of colleagues over the period and mentioned some of the “many collective successes”. These included an increase in Māori and Pacific student numbers, significant building projects and growth in the Division of Health Sciences across all key areas of activity.

In handing over the baton to Professor Paul Brunton, the Division’s new PVC appointed earlier this year, Professor Crampton said he would not trade a minute of his time in the role.

He also thanked Professor Barry Taylor for taking on the role of acting Dean of the OMS.

Professor Crampton continues in his position as Professor of Public Health in Kōhatu - Centre for Hauora Māori at the University of Otago.