Bringing Antarctica to the South Pacific 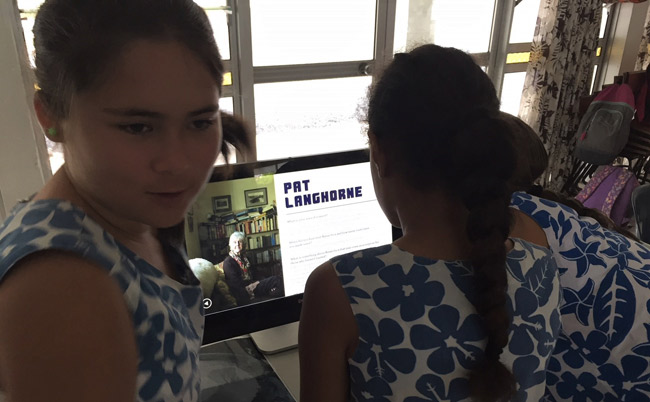 Antarctica and the South Pacific islands seem worlds apart but a recent exhibition taken to Niue and Rarotonga taught local schools this connection is closer than expected.

"Taking Far From Frozen elsewhere amplifies what we do and also expresses the idea we are a Pacific Island country."

Dr Craig Grant, Otago Museum’s Director of Science Engagement, and members of his team recently took the MBIE Unlocking Curious Minds funded exhibition to Niue and Rarotonga introducing over 1,000 children to the science of climate change and Antarctica’s role in it.

“The children were like sponges listening to the talks and explanations,” Dr Grant says. “They got really engaged in the hands-on demonstrations and interactives which ranged from the novelty of a polar tent to a hologram of Antarctica and a virtual reality headset experience.”

Professor Christina Hulbe, head of Otago’s School of Surveying, says the vision for the exhibition from the outset was to spread its messages widely.

“Taking Far From Frozen elsewhere amplifies what we do and also expresses the idea we are a Pacific Island country,” Professor Hulbe says.

“In surveying we have some amazing students from around the Pacific and it’s fantastic to know we are sending things back.”

"A passion for science and the environment is modern day exploration. Anyone who is interested, and has been properly educated, can take part."

The exhibition also facilitates discussions about science as a potential career path and Professor Hulbe, along with Professor Pat Langhorne of Physics, are profiled as leading women scientists in their fields.

Dr Grant told the Otago Bulletin Board that older female students in particular really related to seeing the photos and reading about the science undertaken by Professors Hulbe and Langhorne, which acted as conversation points about science as a career.

Professor Langhorne has travelled to Antarctica approximately 25 times since 1985 as a geophysicist researching sea ice, and says that today it matters more to be appropriately trained as a scientist than to be an archetypal male European polar ‘explorer’.

“A passion for science and the environment is modern day exploration. Anyone who is interested, and has been properly educated, can take part,” she says.

Professor Hulbe also says showing diversity in scientists is important as it sends the message that “there’s a potential role and place for you doing things you may never have imagined.”