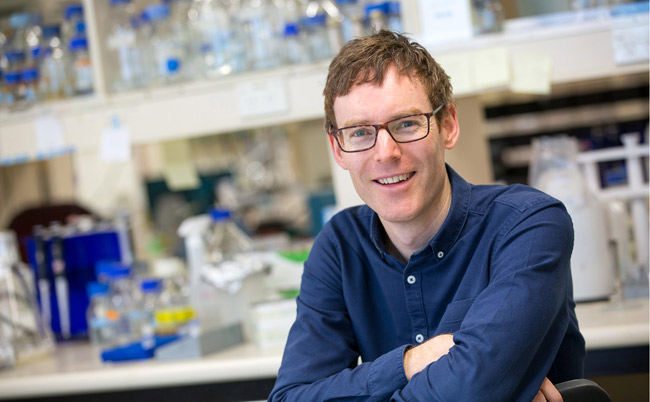 Associate Professor Peter Fineran recently found one of his old primary school social studies books – in which he stated: “The job I would most like to do is a scientist.”

The Otago microbiologist has well and truly fulfilled this ambition – and was this month announced as the recipient of the UK Microbiology Society's Fleming Prize for 2019 – the first New Zealander to win this award.

The prestigious award is named after Sir Alexander Fleming, the founder and first President of the Microbiology Society, who received a Nobel Prize for his discovery of penicillin. It is awarded annually to an early career researcher who has achieved an outstanding research record within 12 years of being awarded their PhD.

The prize will be awarded at the Microbiology Society's annual conference in April 2019 in Belfast, Northern Ireland, where Associate Professor Fineran will also present a lecture.

The Otago Bulletin Board spoke to Associate Professor Fineran about the award, and his work.

What does it mean to you to receive this top international award?

I feel very honoured to be the recipient of this award. I feel very privileged to be able to accept this on behalf of a huge number of lab members and collaborators who have contributed to my research over the years.

How did you find out you had won?

I woke up on a Saturday morning to an email from the Microbiology Society. That was a great way to start that weekend!

What, in a nutshell, does your research focus on?

My lab is interested in small microbes (bacteria) and their battles with viruses (phages) and other small elements (e.g. antibiotic resistance plasmids). These interactions are vital to global cycles, the evolution of pathogens and the spread of antibiotic resistance. We focus mainly on different immune systems in bacteria that protect them from these invaders. The major systems we work on are called CRISPR-Cas adaptive immune systems. They provide bacteria with a memory of past infections and give them specific immunity against that invader in the future. We are also interested in how we can learn from phages to deploy or design new antimicrobial approaches.

How has this changed since you first began your work in this area?

I have been working on CRISPR-Cas for about 10 years. The field has completely exploded in the last five years when people realised that these systems could be exploited for precisely editing gene sequences. This has led to a huge international biotechnological revolution where we now have the ability to edit genes in almost any organism. This has advanced the ability of researchers to understand biology and disease, and holds huge promise in disease treatment and also in agricultural applications. Despite these advances in the applications, there are still many unexplored aspects of the fundamental biology of these systems.

What do you hope to achieve with your research?

My research aim is to understand and exploit phages and bacterial defence systems for agricultural and medical benefit in the long term.

What is your background?

Have you always been interested in science? Or was there a moment growing up when you realised science was for you?

When I was younger I wanted to be an architect, but I was always interested in art and also inventions. I recently discovered a social studies book from when I was 8 or 9 years old and in it I stated “The job I would most like to do is a scientist…”, so clearly science was also a strong interest! I had a great primary school teacher who kept giving us projects/challenges and these really engaged me in science from an early age.