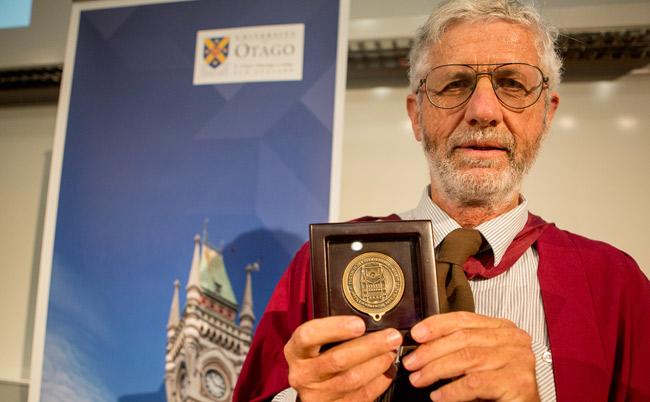 This year’s University of Otago Distinguished Research Medal winner has been described as a research powerhouse.

Geologist Professor David Craw has been awarded the medal – Otago’s highest research honour – and tonight gave a public lecture to mark the achievement.

Professor Craw was recognised for his advancement of the understanding of New Zealand geology, including demonstrating links between tectonic movement and the movement of mineral deposits, and the effect of tectonics on the development of biological species.

"He is a research powerhouse whose more than 300 publications have transformed the understanding of how mountains and landscapes develop, how mineral deposits form and how geology and biological evolution interact."

In announcing the medal, Deputy-Vice-Chancellor (Research) Professor Richard Blaikie said the award reflected the significant contribution Professor Craw has made both to his field and to research performed at Otago.

“He is a research powerhouse whose more than 300 publications have transformed the understanding of how mountains and landscapes develop, how mineral deposits form and how geology and biological evolution interact,” Professor Blaikie said. “His highly-cited academic contributions have had both highly-valued practical and economic impact, as well as having significantly helped to shape our understanding of the word we live in.”

For Professor Craw, the medal represents acknowledgement of a “large amount of work with an extremely diverse set of colleagues and students at Otago, across several departments”.

“Doing research across disciplines is hard, because of the different knowledge bases, techniques and scientific cultures,” he says. “I have really appreciated the tolerance of people outside the geology department, especially in zoology, chemistry, and various contributors to environmental science, as they have taught me a lot of things that they think are pretty basic but I had no knowledge of.”

His research has had an “applied science bent, with focus on specific questions and applications”, and he believes the research medal is a pleasing recognition of applied research and its value and potential as part of Otago’s research mix.