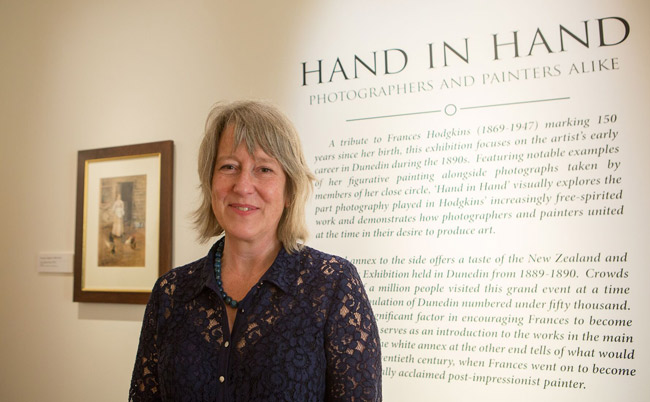 Frances Hodgkins’ early career in Dunedin, and the impact photography had on it, is the focus of the Hocken Collections, Uare Taoka o Hākena’s latest exhibition.

Hand in Hand: Photographers and Painters Alike marks 150 years since the artist’s birth, in 1869, and pays particular attention to the work she created during the 1890s.

Featuring notable examples of her figurative painting alongside photographs taken by members of her close circle, Dr Anna Petersen, curator of the show, says the exhibition visually explores the role photography played in her increasingly free-spirited work.

"There can be no doubt that Frances Hodgkins drew on this vital new art form for inspiration."

“Though rarely openly acknowledged by artists, and long swept under the carpet by their 20th century biographers, the practice of drawing information and creative ideas from photographs was commonplace at the end of the 19th century.

“To ignore the fact is to lose sight of the new ways of seeing and exciting possibilities that advances in photographic technology brought to the world at this time.”

Dunedin, by the late 19th century, was already a well-established centre of photography in New Zealand and home to numerous professional firms, including the Morris brothers, the Coxhead brothers and Burton brothers.

Following the invention of the small, hand-held camera by Kodak in 1888, however, photography quickly started to become a popular pastime amongst the general public as well.

“There can be no doubt that Frances Hodgkins drew on this vital new art form for inspiration," Dr Petersen says.

“A crucial piece of evidence in the exhibition is a unique photograph of Mere Te Kaehe Karetai taken by her father, William Hodgkins, and a previously unpublished painted portrait of Mere Te Kaehe by Frances. This is possibly the earliest of a series of portraits of Kāi Tahu girls and young women that Frances painted between 1896 and 1900,” she says.

Included are photographs by Professor John Halliday Scott and Dr William S. Roberts, of the Otago Medical School, together with William Hodgkins, who were amongst the earliest members of the Dunedin Photographic Society founded in 1890.

"It provides a better idea of the Dunedin Frances knew and helps build up more of a picture of what she may have kept in her mind’s eye as she left New Zealand at the beginning of the 20th century..."

These well-educated amateurs helped establish the pursuit of pictorialist photography in the city, experimenting with the different processes and focusing on a different range of subject matter than the mainstream commercial product.

Hand in Hand also takes into account the impact the New Zealand and South Seas Exhibition of 1889-1890 had on the local art scene and the rise of figurative painting in particular.

“This was very important for Frances Hodgkins because until then, she had always been at odds with her influential father who favoured landscape painting,” Dr Petersen says.

A consideration of the relationship between Hodgkins’ figurative work and photography at the time helps shed light on what inspired her to pursue painting in the first place and why she opted to paint what she did during those first 10 years.

“It provides a better idea of the Dunedin Frances knew and helps build up more of a picture of what she may have kept in her mind’s eye as she left New Zealand at the beginning of the 20th century and went on to become an internationally acclaimed post-impressionist painter in the 1930s and 1940s.

“It is good to acknowledge the activities of the early members of the Dunedin Photographic Society and their contribution to the cultural life of the city in the 1890s as they united with painters in their desire to produce art.”