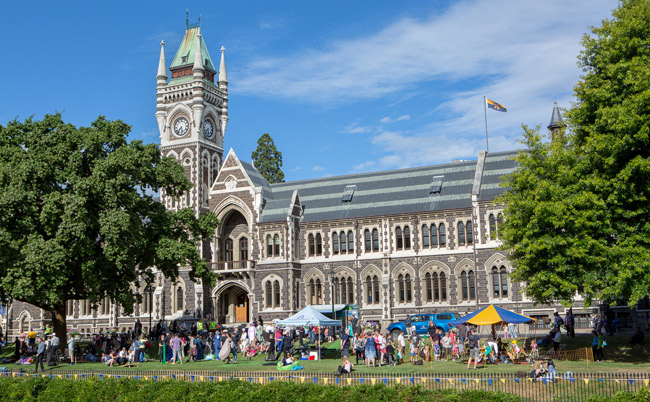 Thousands gathered in front of the Clocktower on Friday evening for the 150th anniversary picnic. Photo: Sharron Bennett.

Stilt walkers wearing oversized mortar boards, actors in historic costumes and bubble blowers mingled with the crowd, which was estimated to be between 2,000 to 3,000 people.

Amadeo Enriquez-Ballestero, from the Otago Museum, performed a variety of impressive science experiments and explosions in front of the Clocktower Building. 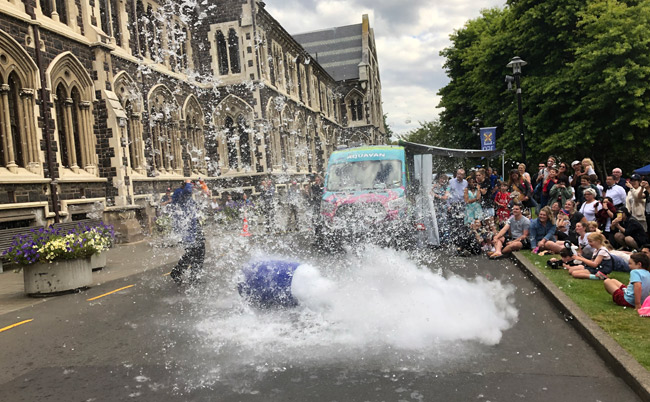 Another resident, Sonia van de Klundert, agreed and said events like the picnic made the University “more approachable” for families, while Sa Maylanie Alai loved the family atmosphere of the event. 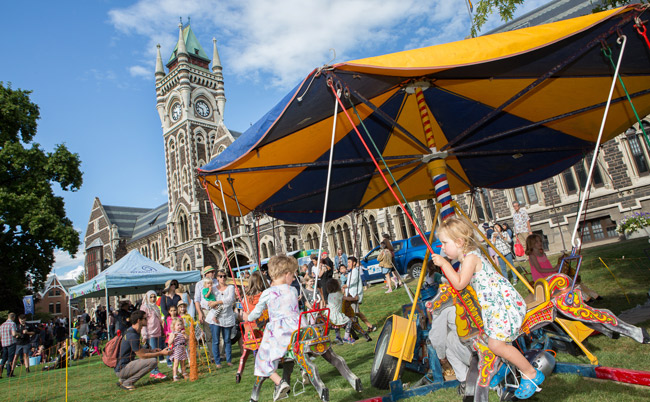 A miniature merry-go-round was popular with families. Photo: Sharron Bennett.

The year of celebrations continues with the launch of Dr Alison Clarke’s book Otago, 150 years of New Zealand’s First University on 15 March. The following day a lively street parade of students and staff will march from the Dental School to the Octagon.

The weekend of 12 to 14 April features both the Science Teller festival and the Tally Ho! 3 concert.

The Science Teller Festival keynote guests are bestselling author Mary Roach and science writer Michael Shermer, who will discuss the festival’s theme Science and the Afterlife.

A debate between Michael Shermer and Professor Justin Barrett from the Fuller Theological Seminary tackles the question: Is there life after death? Registrations are now open at https://www.otago.ac.nz/scienceteller/index.html

Tally Ho! 3 will be a celebration of the soundtrack of many people’s lives through the 1980s and 1990s - the Dunedin bands they may have heard in the Union Hall at Orientation will be rendered more sumptuous by the Dunedin Symphony Orchestra and world-famous singer/composers including Martin Phillipps and Shayne Carter, along with more recent stars Nadia Reid and Anthonie Tonnon, and special guest soprano Anna Leese.

On Saturday 1 June, the Academic Procession leaves from the Dental School at 1.30pm, marching to the Dunedin Town Hall, where a special-format Convocation Ceremony begins at 2:30pm. The ceremony is an historic event which last took place on the University’s centennial. It includes musical items, speeches and the awarding of honorary doctorates. At 6:30pm there will be fireworks in the Octagon, followed by the Anniversary Dinner at the town hall at 7pm.

Sunday’s 150th Celebratory Church Service at Knox Church at 10:30am includes a Māori welcome, readings, a massed choir, a Pacific Islands Choir, and concludes with a release of doves from the Knox Church garden.

Residential college lunches follow and in the evening A Celebration of the University in Words and Music will be held at the Dunedin Town Hall. The gala concert offers a feast of music with connections to the University, from the early days of the Department of Music right up to the present, and promises to be one-of-a-kind – a mix of old and new, nostalgia and innovation, with some surprises in store.

New compositions to be premiered at the concert are a fanfare entitled Otago Flourishes by Dr Peter Adams, and a special piece by Professor Anthony Ritchie entitled Owheo, with words by former Burns fellow Sue Wooten.

In September, the University hosts the UNESCO Play Festival from 13 to 20 September, showcasing new plays, covering a wide range of themes, from various UNESCO Cities of Literature and elsewhere in New Zealand. The programme will also feature workshops, panel discussions, and a series of forums on aspects of 21st century dramaturgy and playwriting.

The Heritage Festival hosted by Otago at the end of September will be a chance to celebrate the architectural heritage of the University. The festival runs alongside the Australasian Victorian Studies Association conference 1869.

In early October, the Otago University Rowing Club is hosting an international universities rowing regatta to celebrate the anniversary. Universities from all over the globe will join OURC for a three-day series of high-quality racing, including crews from Russia, Japan, China and Canada. In conjunction with this event, OURC will be celebrating its 90th anniversary and will host an Alumni Reunion for all past rowers.

Throughout the year celebrations continue with a wide range of academic conferences and reunions, including the 50th Reunion of University College on 22 to 24 November. Events around the country include a Parliamentary reception in Wellington on 6 March and cocktail events in Auckland on 3 May and Christchurch on 1 August. Alumni events held in regional New Zealand, the Pacific, Southeast Asia, the UK and North America during the year will also take the opportunity to celebrate the anniversary.

More photos from the Picnic taken by Sharron Bennett: 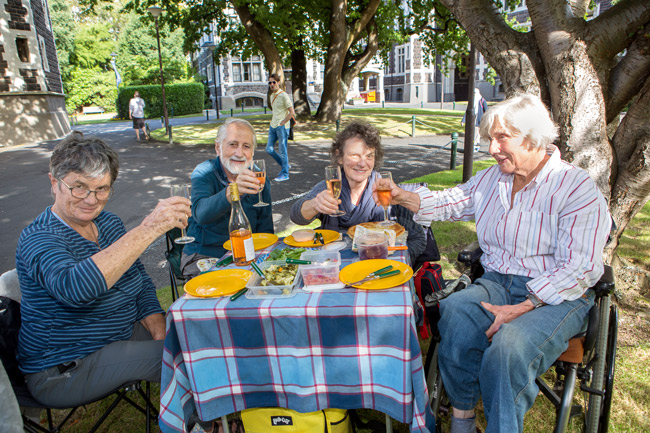 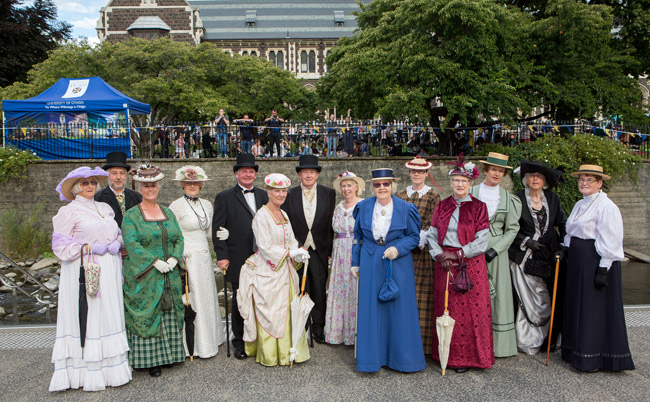 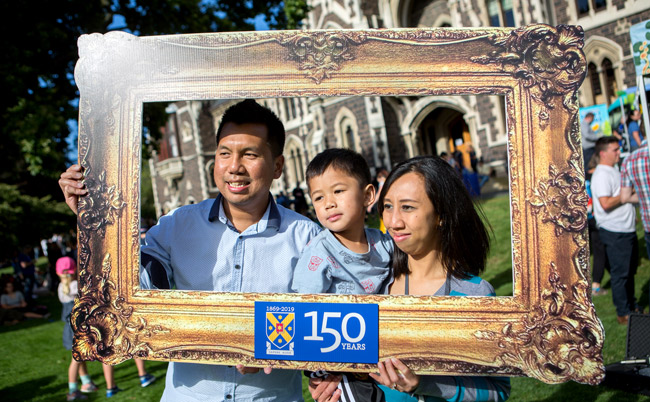 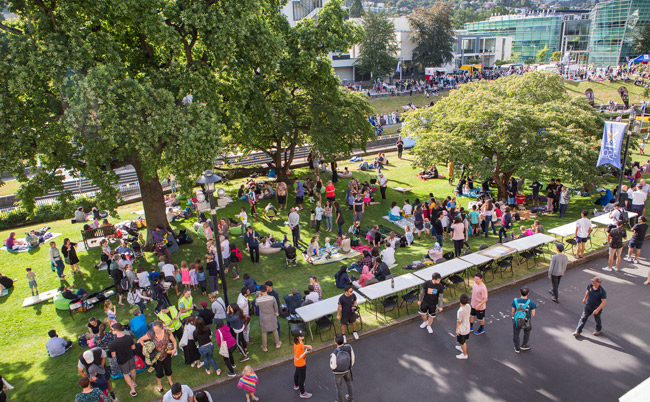