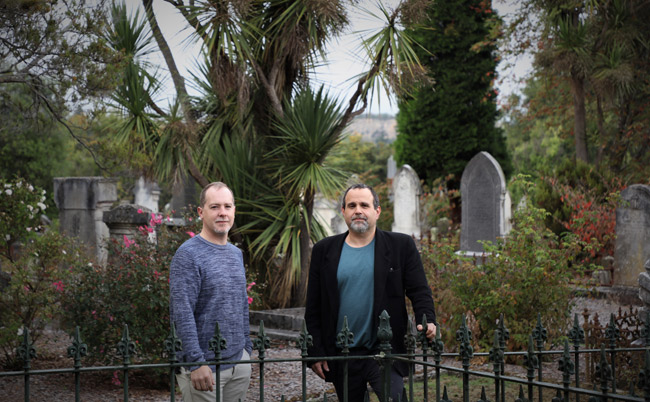 Associate Professor Jesse Bering (left) and Professor Jamin Halberstadt, the organisers of ScienceTeller 2019 exploring Science and the Afterlife - which will be held from 12 to 14 April.

Bringing science and storytelling together, the upcoming ScienceTeller 2019 exploring Science and the Afterlife, is the inspiration of the inquiring minds of Associate Professor Jesse Bering, Director of the Centre for Science Communication, and Professor Jamin Halberstadt of the Department of Psychology.

“Most people think that there’s no greater mystery than what happens to us after we die,” Associate Professor Bering says. “But why do so many of us assume that something happens at all? And how can we grapple with the distinct possibility that the afterlife is a ‘mere’ cognitive illusion?”

Associate Professor Bering thinks most people don’t appreciate how close scientific research is getting to answering such age-old questions.

"But why do so many of us assume that something happens at all? And how can we grapple with the distinct possibility that the afterlife is a ‘mere’ cognitive illusion?"

Some of the leading scholars in the field are coming to Otago for ScienceTeller 2019 to discuss fascinating new research about the psychology of afterlife beliefs and what happens after we die, spanning diverse topics from immortality, to the fear of ghosts and how modern children learn about death.

The biennial event represents the culmination of two years of research by Associate Professor Bering and Professor Halberstadt, who have each had a long interest in why people hold religious beliefs.

In their current research, they ask why people hold nonreligious beliefs, and raise the possibility that some skeptics are in fact “secret believers,” whose intuitions about the continuity of the mind after death conflict with their conscious reasoning.

The two psychologists have conducted numerous studies suggesting that nonbelievers’ behaviours and judgements when examined carefully under laboratory conditions, reveal a deep-seated ambivalence or uncertainty about the afterlife.

“We argue that many if not most people hold strong intuitions about the afterlife, and under the right conditions behave in ways that reveal a ‘belief’ in life after death,” Professor Halberstadt says.

“Leave a skeptic alone in a room and tell them that a ghost has recently been spotted there, and just watch how they react.”

Associate Professor Bering and Professor Halberstadt also collaborate on a range of related research from studies of people’s attitudes toward the recently deceased, to the study of objects with which people choose to be buried or cremated.

“We’ve recently collected data from dozens of funeral homes across New Zealand to find out what people are being buried or cremated with,” Associate Professor Bering says. “And the preliminary results are fascinating. We’re finding everything from the ashes of a beloved pet, to fishing poles, to fully cooked meals.”

"If you’re mortal, or know someone who is, you’ll want to be there. This is a once in a lifetime opportunity."

The biennial ScienceTeller event presents and promotes public discourse on often controversial scientific topics in a way that is accessible and engaging for a general audience.

This year’s keynote speakers include bestselling American science writer Mary Roach, author of Spook: Science Tackles the Afterlife, and world-renowned intellectual Michael Shermer, founder of the Skeptics Society and author of Heavens on Earth: The Scientific Search for the Afterlife, Immortality, and Utopia.

Other highlights of the event will include a debate (“Is There Life After Death?”) between Michael Shermer and cognitive scientist Professor Justin Barrett from California, and a special screening of the TV series Wellington Paranormal, including question-and-answer time with series’ producer Paul Yates.

Other top international researchers will present Ted-style talks on the development and function of afterlife beliefs, including work conducted at the University of Otago by Associate Professor Bering and Professor Halberstadt’s research team.

“If you’re mortal, or know someone who is, you’ll want to be there,” Associate Professor Bering says. “This is a once in a lifetime opportunity.”

ScienceTeller 2019 will be a live streamed event and runs from 12 to 14 April. It will be a busy weekend in Dunedin also featuring another of the University’s 150th key events, TallyHo!3 which will be a celebration of the soundtrack of many of our lives through the 80s and 90s.