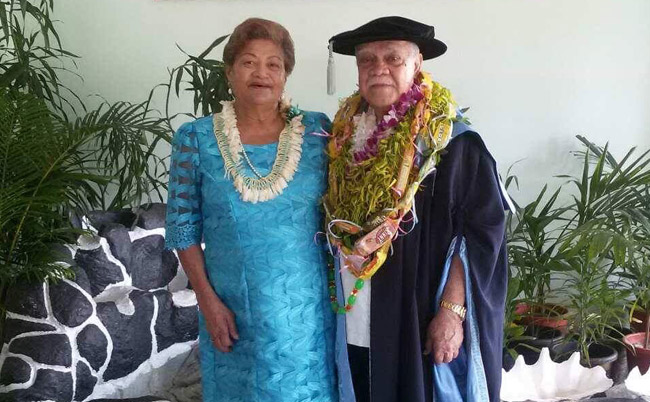 Last week, the Pacific 150th anniversary celebrations attracted alumni from around New Zealand and the Pacific region, to celebrate the achievements and acknowledge the important role and contribution of Pacific staff and students to Otago.

Out of respect for the victims of the tragic events in Christchurch, the anniversary dinner on Saturday was cancelled and those attending the weekend spent their time instead with friends and colleagues, joining together to support each other.

Among the distinguished alumni who travelled to Dunedin for the weekend was the Honourable Tapusatele Dr Le Mamea Ropati Mualia, the Deputy Head of State of Samoa.

Well wrapped-up against a chilly early morning start on Friday, he took part in an Ambrose golf tournament at Chisholm Links, with around 20 other keen golfers including his grandson Mathew Te'o.

"I was very lucky to come to Otago on a scholarship. When I got here I felt sorry for a lot of young people back in Samoa who didn’t have the opportunity I had for further education, and I was determined to go back and fight very hard to get a university started in Samoa."

Hon. Tapusatele graduated with a BPharm in 1970 and since then six of his seven children have studied at Otago and four of his grandchildren are currently studying in Dunedin.

After graduating, he worked as Chief Pharmacist for Cherry Farm Hospital, and married registered nurse Maiava Elisa in Knox Church. The local Samoan community hosted their wedding reception at the Union building on campus.

Hon. Tapusatele was also a keen rugby league player, playing mostly for the University team, but also for the Samoan rugby league team in Otago.

In his final year, he was President of the Samoan Students’ Association.

“I was very lucky to come to Otago on a scholarship. When I got here I felt sorry for a lot of young people back in Samoa who didn’t have the opportunity I had for further education, and I was determined to go back and fight very hard to get a university started in Samoa.”

He and Maiava returned to Samoa in 1971 and he became Chief Pharmacist at the Tupua Tamasese Meaole Hospital.

“After much prompting by the late Vaai Kolone and my district, I ran for Parliament [successfully].”

The decision shaped the rest of his career, with Hon. Tapusatele spending 36 years in politics and holding a number of different ministerial posts. He also went on to establish their family business, the Multipharm Laboratories and Samoa Pharmacy, where he still dispenses medicines when he finds the time in the evenings.

One of his most important government roles was becoming Minister of Education from 1982-84.

“And then my dream came true, we started the National University of Samoa.”

The NUS has grown from 47 students in its first year to a roll of more than 3000 today, with students studying across a broad range of faculties, including Arts, Business, Education, Science, Health Science and Technical Education. In 2018, the NUS honoured Hon. Tapusatele with an Honorary Doctorate in Political Science and Education.

In his final government post as Minister of Agriculture and Fisheries, he chaired the 39th Session of the biennial Food and Agriculture Organisation of the United Nations (FAO) Conference in Rome.

“It was a prestigious thing for a minister of a small island country. I’m very glad I finished off on a high note.”

When he resigned from Parliament in 2016, the Samoan government appointed him to the Council of Deputies, making him one of the country’s two deputy heads of state.

"I love this place, we bought a house in Opoho but sold it after our children graduated. Now I wish we hadn’t because all the young ones are coming!"

Despite the cool start on the golf course, Hon. Tapusatele was glad to be back in Dunedin catching up with friends and family and says he regards the city as his “second village”.

“I love this place, we bought a house in Opoho but sold it after our children graduated. Now I wish we hadn’t because all the young ones are coming!”

Hon. Tapusatele is also the Patron of the Samoa Alumni Chapter of the University of Otago, which was launched in 2016 and is co-hosting with Otago Alumni the 150th anniversary Celebratory Dinner in Samoa on 4 April.

In recent years, more active engagement with Pacific communities has led to greater numbers of Pacific students at Otago – increasing from 2.1 per cent in 2000 to 5.2 per cent of domestic enrolments in 2018.

In an interview about her recently published book Otago, 150 Years of New Zealand’s First University, Dr Alison Clarke was asked how she would describe the University.

She said “it’s a place of many contrasts – at once amazingly innovative and entrepreneurial, and also, at times, very conservative. Mostly it’s a place made up of talented people and always has been.

“When you look at the big picture, and what the University has achieved around the world, particularly in the Pacific, it is pretty remarkable.”