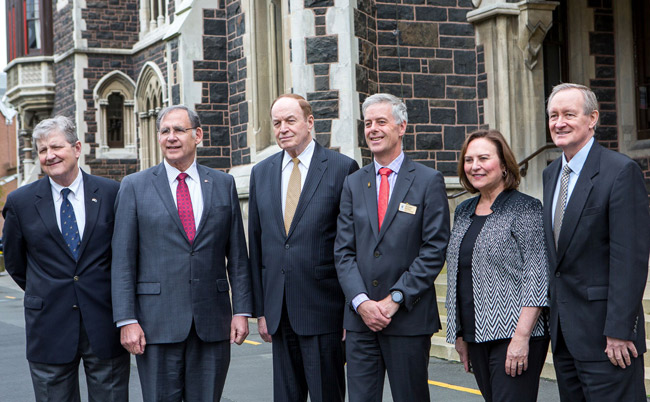 Five members of the United States Senate took the time to visit the University of Otago during their time in New Zealand earlier this month.

The only university visited on their tour, the Senators were keen to hear about research work undertaken by Otago which was of interest to both New Zealand and the United States.

They listened to presentations from three Otago professors on research conducted here on space weather, the Ross Ice Shelf, and international relations, followed by discussions on the importance of the research to the Senators’ various roles or constituencies.

Professor Craig Rodger, Head of the Department of Physics, talked about collaborations with organisations including NASA to research the effect of space weather on things like power stations on earth.

Professor Christina Hulbe, Dean of the School of Surveying, spoke about her work leading a drilling programme at the Ross Ice Shelf looking at the history of the ice and the ocean under the Shelf.

Lastly, Professor Robert Patman, of the Politics Department, gave an overview of current New Zealand/United States relations and the importance of ongoing diplomatic dialogue between the two countries.

The Senators were keenly interested in the presentations and spoke highly of Otago’s international reputation and the importance of universities and research in facing the challenges in the world today.