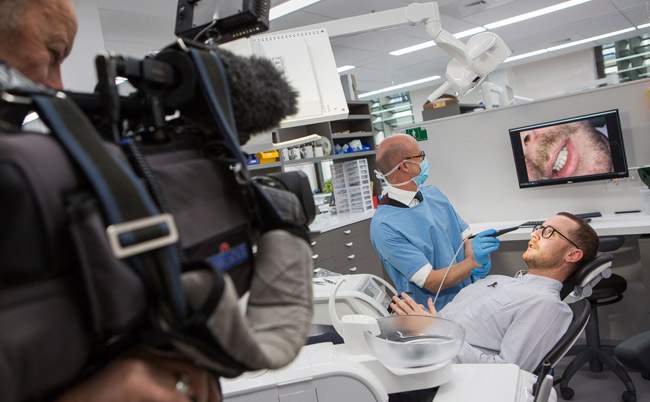 One of the “highest tech” dental facilities in the world was officially opened this morning – the hospital-level patient-treatment building for New Zealand’s only national centre for dentistry, at Otago.

Division of Health Sciences Pro-Vice-Chancellor Professor Paul Brunton told the packed event that he believes it is possibly the largest building of its kind in the southern hemisphere and he felt overwhelmed by the amazing occasion. 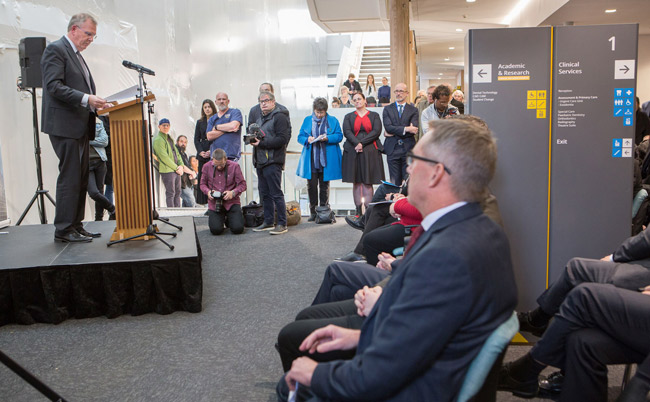 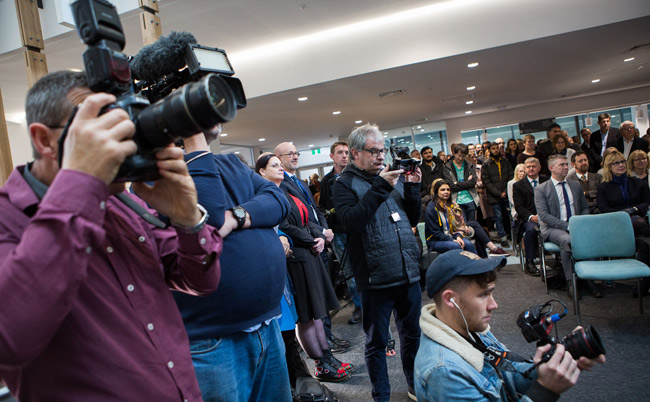 A large crowd, including staff and local and national media, listen.

He says the impressive Faculty of Dentistry already provides world-class education and research so the challenge now is to take that to next level – and that “is a challenge I have no doubt you are up to”.

He also challenged the faculty to work with the government “to do all we can to improve the oral health of New Zealanders … you all know there’s much work to do”.

Speakers at today's launch used a lectern that was also used during the opening of the faculty’s neighbouring Walsh Building, which started being used for patient treatments in 1961 and will now be gutted then refurbished as the next stage of this project. 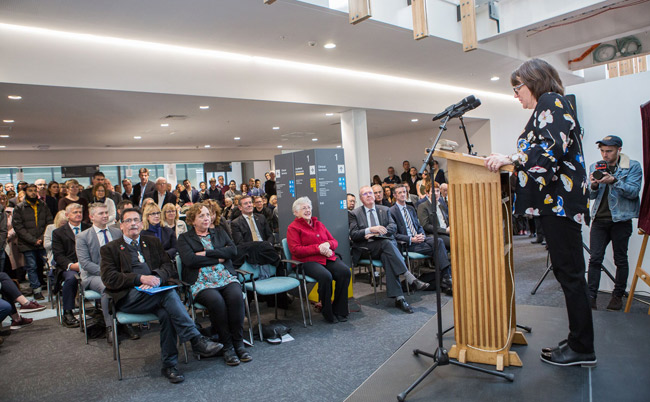 Vice-Chancellor Professor Harlene Hayne told the audience this is the single largest and most complex project the University has attempted in its 150 year history so involved a lot of risk but the University had gone ahead because of the faculty’s incredible dedication to teaching, research and clinical practice.

The event included the unveiling and then laying of a stone to mark the occasion by Chancellor Dr Royden Somerville QC. 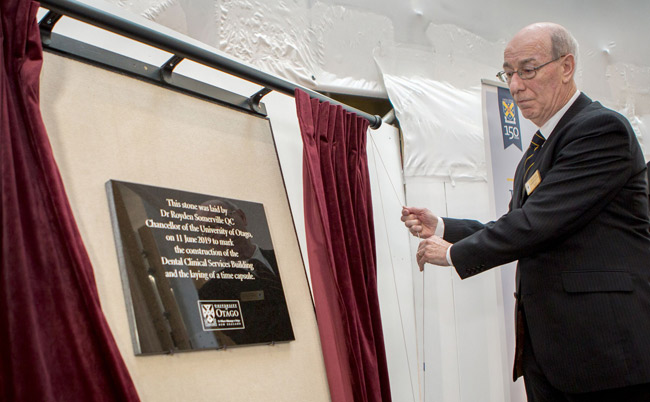 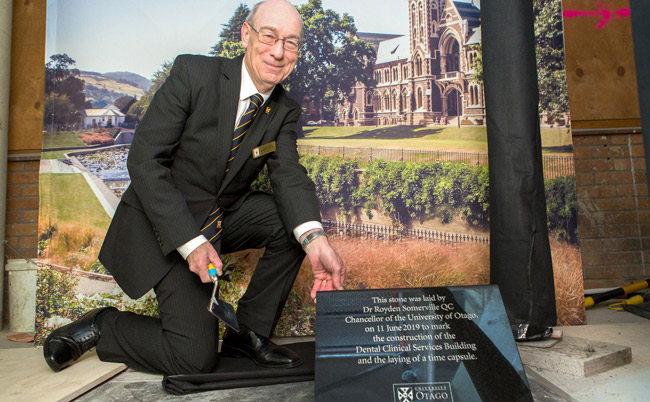 Attending the event was Dunedin’s Dame Elizabeth Hannan, the daughter of Sir John Walsh who was Faculty of Dentistry Dean for 25 years from 1946 and had the faculty’s existing Walsh Building named in his honour.

Dame Elizabeth says the occasion was emotional and she “absolutely feels his vision is continuing”. 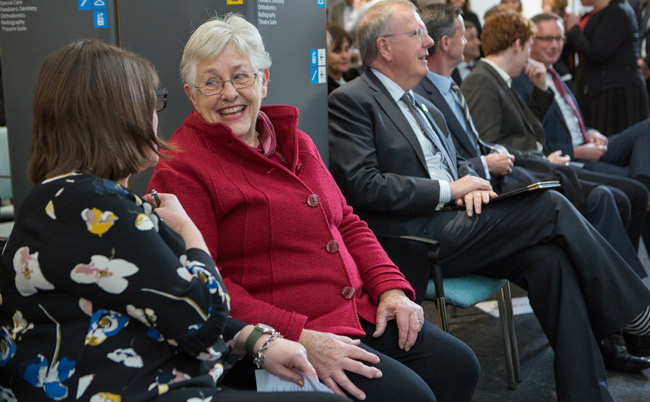 Dame Elizabeth Hannan with Professor Harlene Hayne at the opening.

Faculty of Dentistry acting Dean Professor Karl Lyons says his is thrilled with the opening.

“To see the building and what we have got, and what we can do in the future, is just fantastic.”

The faculty is also constructing a new building in Counties Manukau to help meet high health needs while providing students with wide-ranging learning opportunities in a diverse community that will increase their understanding of people from a range of backgrounds.

Jamie Cargill is the project director for construction of both the Counties and Dunedin building, which has been a once in a lifetime opportunity to work on a dental hospital because not many are built around the world – now he is thrilled staff, students and the public are using it.

“This project is also a great investment in Dunedin. The national centre for dentistry has been here for over 100 years and this will mean it’s here for at least another 50-plus – and that’s exciting.”

He has been working on the project for more than five years – from design to build – and will be moving on to the next phase soon, gutting and rebuilding the interior of the Walsh Building, which is in front of the new building in Great King Street.

In addition, student tutorial spaces are linked to patient treatment areas, which integrates technology to enrich the learning experience, and with the use of digital technology, staff are no longer using potentially hazardous chemicals to produce x-rays.

Previously, only patients’ names, contact details and financial records were kept electronically, everything else was in paper files taken from one place to another as patients were assessed and treated – during about 76,000 treatments annually for the public.

In the new building, the electronic patient management system Titanium has been broadened to cover more tasks so all new files will be completely electronic. As in any health environment, staff and students will be allowed access to relevant patients’ files only and have to sign a confidentiality agreement, he says.

With the new system:

Using the upgraded Titanium system also helps prepare students for the workplace because most district health boards around New Zealand use Titanium – the software is one of the most commonly used in the health sector in Australasia. Many private practices also use a similar version of Titanium software, Professor Brunton says.

Having an electronic system will help solve one of the most common complaints patients make to the Faculty of Dentistry as well, that they did not know what their treatment was going to cost.

Staff and students can print out a treatment estimate to discuss with patients before treatment starts.

Despite all the changes, this University service continues to aim to provide patients with quality treatment at an attractive cost, recognising patients play a vital role in helping to train the students, Professor Brunton says.

The new systems were introduced first at Orthodontics in the Faculty of Dentistry and the Te Kaika health, social and education clinic in Caversham in Dunedin – which provided opportunities to smooth out any complications with both the up-graded electronic systems and new processes.

All existing processes were documented by a business analyst from the moment a potential patient contacts the Faculty of Dentistry until the patient leaves its care, including investigations into patients’ possible eligibility for funding.

That formed the basis for new processes and about 80 per cent of them were introduced before staff and students started using the new building, in preparation for the move.

Occupation of the new building

The public began being treated in the new building early this month, when the urgent care clinic started taking a few patients.

All those patients used the new public entrance from Frederick Street which opens into a four-storey atrium and general reception that this project added between the new building and dentistry’s existing Walsh Building.

All the public clinics should be open from the start of the second semester on 8 July, but the existing clinics in the Walsh Building will stay in place initially in case they are needed for any reason.

Staff and students have had a building orientation and received more training on new equipment and systems in the build-up to the official opening, Professor Brunton says.

Take a look at some more photos from today's opening, courtesty of Sharron Bennett. 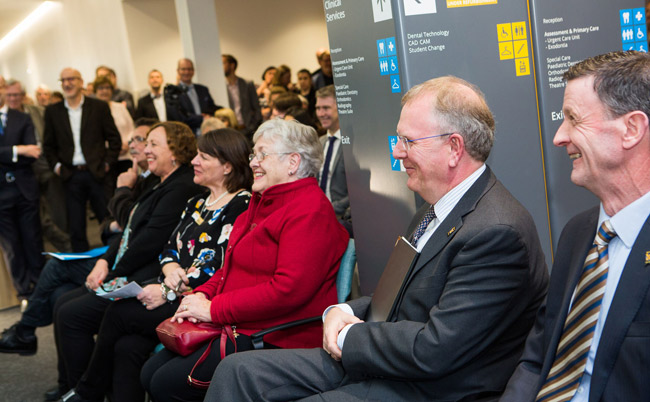 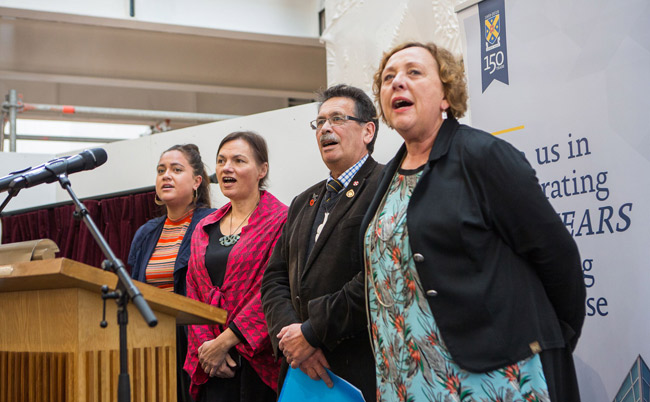 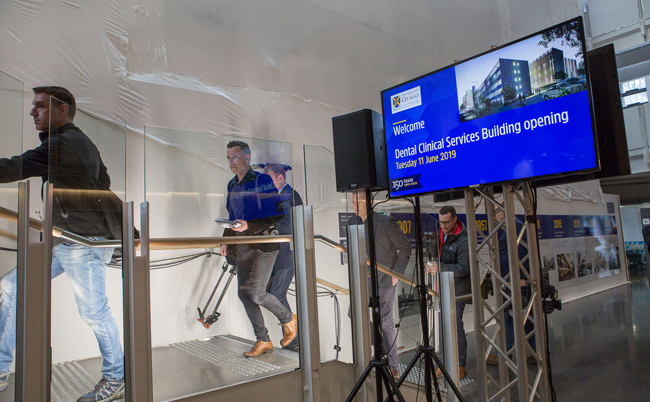 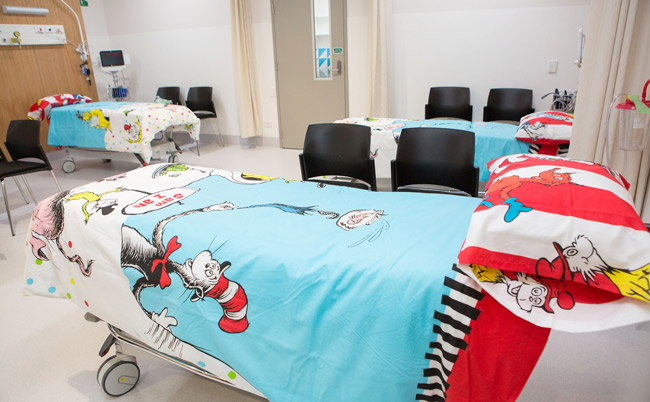 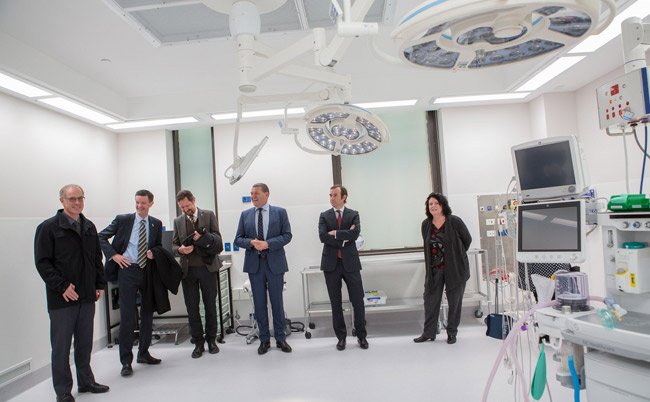 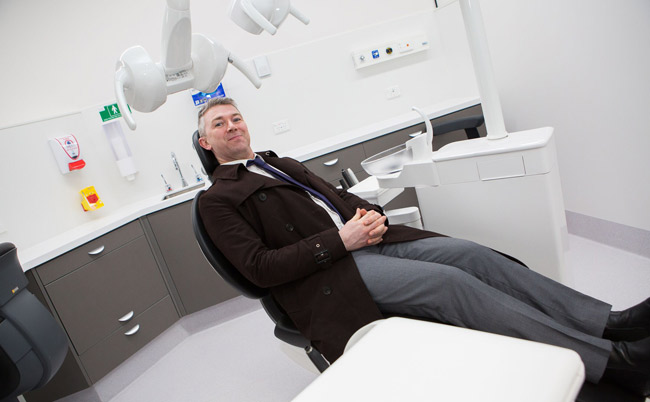 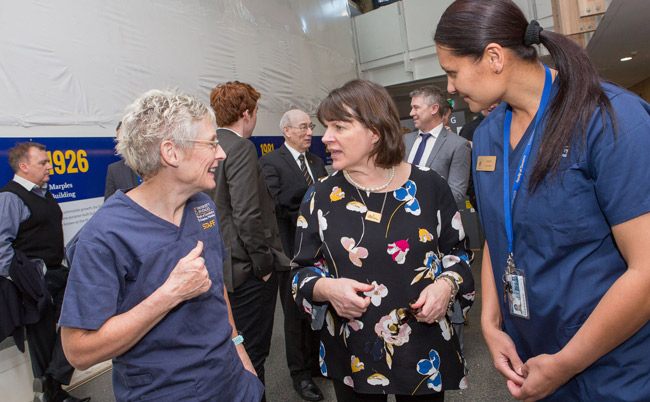 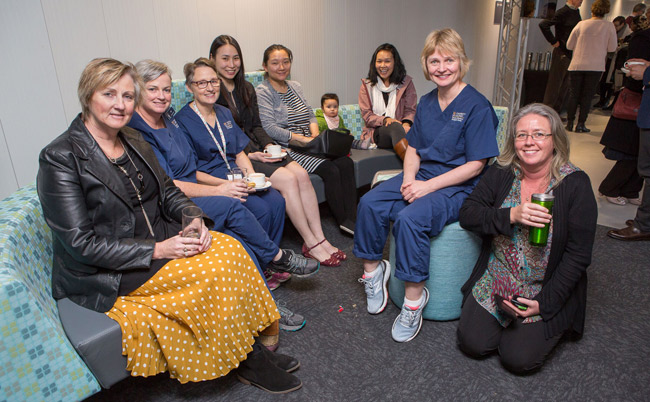 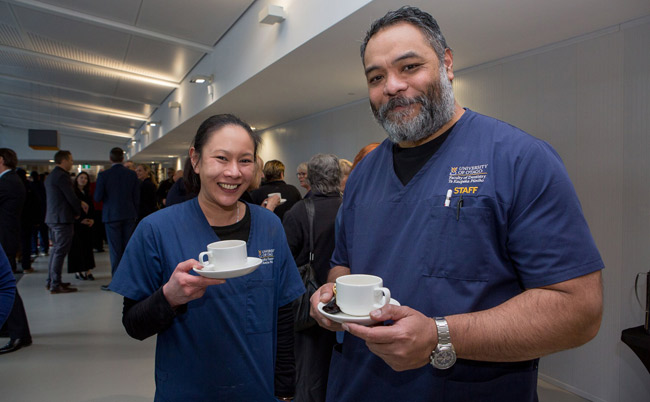 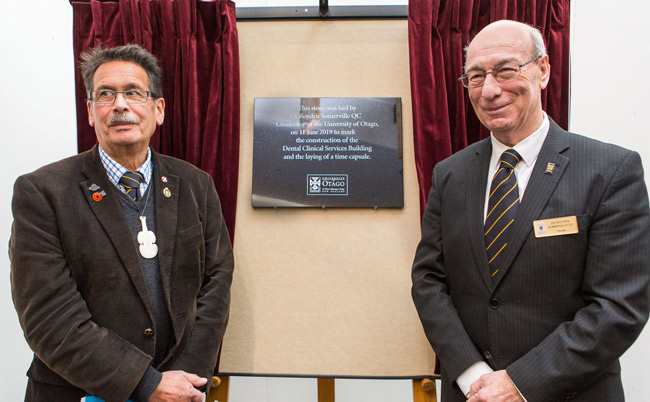 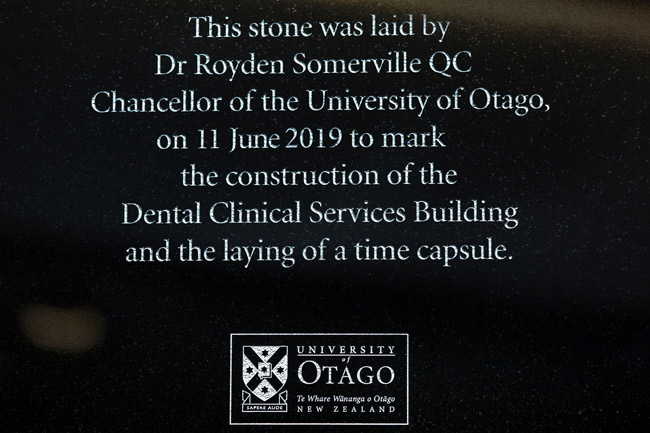 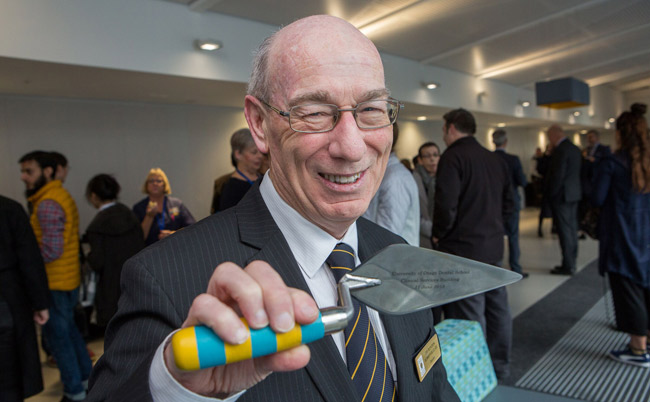