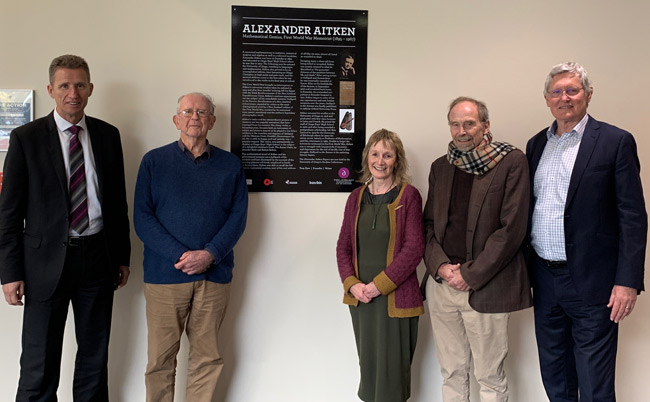 An official information board, celebrating the life of noted mathematician and author Alexander Aitken has been unveiled at Otago’s Department of Mathematics and Statistics.

The product of a partnership between Dunedin City of Literature and the University, the concept was developed by Professor Tom Brooking, poet Vincent O’Sullivan and local writer Tony Eyre, and presented to the University’s Artwork Collections Committee who approved the installation.

"The 150th is a perfect opportunity to celebrate the memory of this courageous and gifted scholar and musician and his special significance for Dunedin."

Having decided to honour the contributions of Aitken, the City of Literature took the opportunity to design the information board as a creative alternative to the more traditional bronze plaques in the Dunedin Writers’ Walk.

Mr Eyre, who also wrote the words for the Board, says “first and foremost he [Aitken] was a mathematician, so I thought let’s take it to somewhere relevant to him” and at that point the University was approached.

"The 150th is a perfect opportunity to celebrate the memory of this courageous and gifted scholar and musician and his special significance for Dunedin.”

Alexander Aitken was born in 1895 and studied at the University of Otago, where he graduated in Latin and French in 1920. During his studies World War 1 broke out; he enlisted in 1915 and was a member of the forces sent to Gallipoli. It was his wartime experiences that served as the basis for his memoir Gallipoli to the Somme. His story was also recently turned into a children’s book, The Anzac Violin, by 2015 University of Otago College of Education/Creative New Zealand Children’s Writers in Residence Jennifer Beck and Robyn Belton. You can read more on The Anzac Violin here. 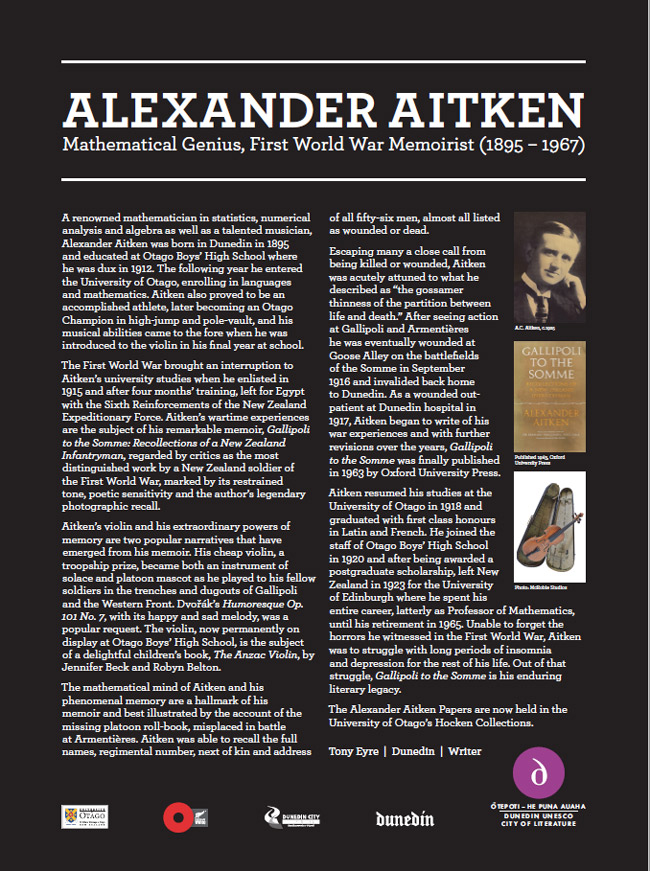 The Alexander Aitken information board.