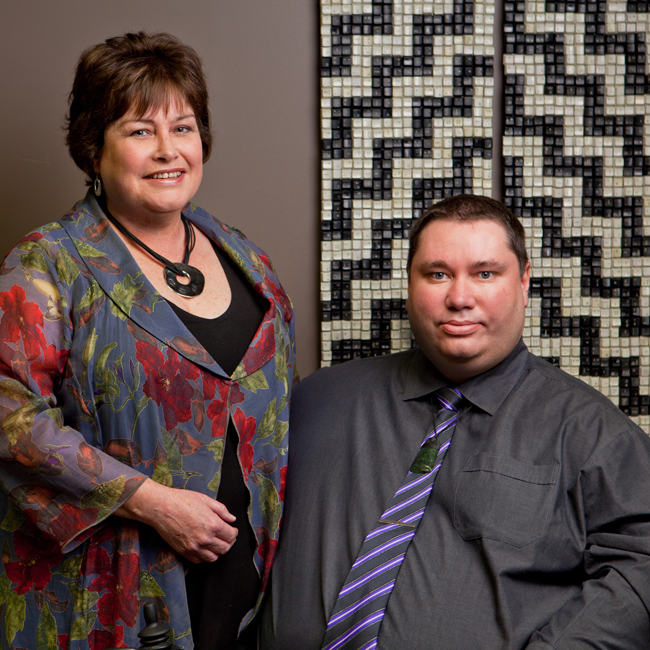 Bernadette Jones and Dr Tristram Ingham of the University of Otago, Wellington, who came up with the bubble concept to explain the social distancing required under New Zealand's COVID-19 response.

The creator of New Zealand’s bubble concept, introduced early on in the COVID-19 response to ensure Kiwis maintained social distancing, has been surprised and delighted by the take up of his idea.

Dr Tristram Ingham, a Senior Research Fellow in the Department of Medicine at the University of Otago, Wellington, developed the concept while advising the Ministry of Health on the COVID-19 response for the disability sector.

His work, and those of his collaborators, his wife Bernadette Jones, a Research Fellow in the Department of Medicine and their fellow academics, Dr Meredith Perry, a Senior Lecturer on the Wellington campus, and Dr Brigit Mirfin-Veitch, a Senior Lecturer on the Christchurch campus, has been commended by Director-General of Health Dr Ashley Bloomfield in a letter to Vice-Chancellor Professor Harlene Hayne.

"I remember the first time I saw Prime Minister Jacinda Ardern say it. It was like ‘wow, she said it’, our concept got out there."

Dr Bloomfield singled out Dr Ingham for particular praise, saying his concept of the bubble had captured the imagination of both the Prime Minister and the nation, and helped frame life under Alert Levels 4 and 3 more positively.

Dr Ingham has been surprised by how widely the idea has been taken up.

“I remember the first time I saw Prime Minister Jacinda Ardern say it. It was like ‘wow, she said it’, our concept got out there. And there was a great sense of pride from within the disability directorate that we had contributed to the whole picture.”

Dr Ingham began thinking about ways of describing the idea of physical distancing before the Government introduced the COVID-19 four level alert system. It was a time of much anxiety, almost panic, among those at particular risk from the virus, including older people, those with pre-existing medical conditions and those with disabilities.

As National Executive Chairperson for the Muscular Dystrophy Association of New Zealand, and as someone living with muscular dystrophy himself, Dr Ingham had the real sense that any recommendations needed to be pro-active, empowering and reassuring.

“We didn’t want at risk communities to be passive recipients of their fate. The methods had to be around empowering individuals and whānau to have control over their own life and situations for self-preservation.”

Dr Ingham says the discussions New Zealand was having about self-isolation, quarantine, physical distancing, and social distancing were quite difficult to convey to the public.

But everyone knows about bubbles.

“Bubbles are a universally known concept, which could be made appealing to children or to people that didn’t have a public health background. They could think of a bubble as a fragile yet beautiful structure that has to be nurtured and preserved.

"Bubbles are a universally known concept, which could be made appealing to children or to people that didn’t have a public health background. They could think of a bubble as a fragile yet beautiful structure that has to be nurtured and preserved. And it introduced the concept of making sure you don’t burst your bubble."

“And it introduced the concept of making sure you don’t burst your bubble.”

Dr Ingham and Ms Jones also decided a visual representation was needed to explain the bubble concept to others.

Ms Jones says, “We decided what we needed and especially for people with low literacy, and those with English as a second language, was something visual, to show people how this concept can work.”

So just two days before New Zealand went into Alert Level 4 lockdown, Ms Jones enlisted the voluntary help of one of the couple’s daughters, Emma Draper, who is a professional actress, and that of Dublin-based Kiwi designer Ian Hammond, as well as a couple of creative friends to produce an animated video clip.

The video they created, Build your Bubble was later adopted by the Ministry of Health.

Dr Ingham is grateful to the Vice-Chancellor, who early on gave the green light to the University’s academic staff to assist the Government with the COVID-19 response where needed.

Since Prime Minister Jacinda Ardern first told New Zealanders to form their own bubbles, Dr Ingham says the bubble has gone the way of all good viral concepts.

“We lost control of the narrative. What I think is quite interesting and ironic is that it seems to be being picked up internationally and a whole bunch of other academics are starting writing about what it means, and the symbology of it. In some cases they are reading more into it than I even thought at the time.

“We were just working as fast as we could and we locked on to a concept and ran with it.”

Take a look at the Build your Bubble video.