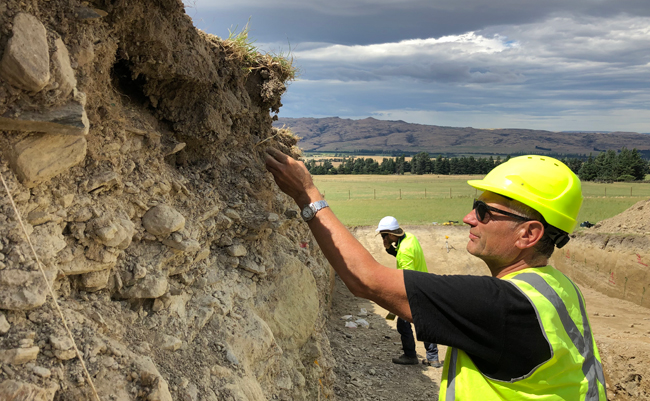 The Southland region could be New Zealand’s largest area of incomplete fault information, but University of Otago researchers can now fill in the gaps after receiving a new EQC grant.

"The seismic hazard maps make sense when considering plate tectonics in that the highest seismic hazard is close to the major known faults, and declines with distance from those boundaries. However, it’s the lack of information for some regions that is concerning."

While there is a perception in Southland that major earthquakes only happen in Fiordland and on the Alpine Fault, this research will look at other active faults in the region to understand their past earthquake behaviour and estimate the potential risk they present.

“As an example, the northern front of the Hokonui Hills potentially defines a long fault system stretching from Mossburn to Nugget Point on the coast, which if released could result in a significant seismic event,” Professor Stirling, Otago’s Chair of Earthquake Sciences, says.

A further concern is that the long time periods between earthquake events allow the faults to get stronger than their plate boundary counterparts, so the earthquakes they produce tend to be more energetic.

Professor Stirling worked with others to create the National Seismic Hazard Model that is used to develop New Zealand’s building design standards.

“The seismic hazard maps make sense when considering plate tectonics in that the highest seismic hazard is close to the major known faults, and declines with distance from those boundaries,” he says.

“However, it’s the lack of information for some regions that is concerning.”

As the Deputy Director at the Centre for Sustainability, Dr Orchiston’s part of the research will investigate the perception of local government stakeholders and other users of the Building Act (including the Earthquake Prone Building legislation), to understand how they are implementing the Act in their core business.

"The combination of research skills on this EQC funded project will enable us to look at this problem from a number of important angles."

Dr Orchiston holds leadership roles in QuakeCoRE (NZ Centre for Earthquake Resilience) and Resilience to Nature’s Challenges, and is also Science Lead for AF8 [Alpine Fault magnitude 8], a collaborative project designed to improve response capability for a future magnitude 8 earthquake on the Alpine Fault and to outreach public education messages about disaster preparedness and resilience.

Dr Orchiston says that taking interdisciplinary approaches to problems like earthquake risk are needed to understand the ways that we can get better prepared to face those challenges.

While funding for seismic work has traditionally been focussed on areas like Wellington and the Alpine Fault, Professor Stirling says this opportunity to undertake work in more seismically quiet regions such as Southland is crucial for building a picture of seismic hazard, risk and preparedness for the entire county.

The research funding will cover the work of a post-doctoral student and a PhD candidate alongside Professor Stirling and Dr Orchiston.