Is this one the oldest? 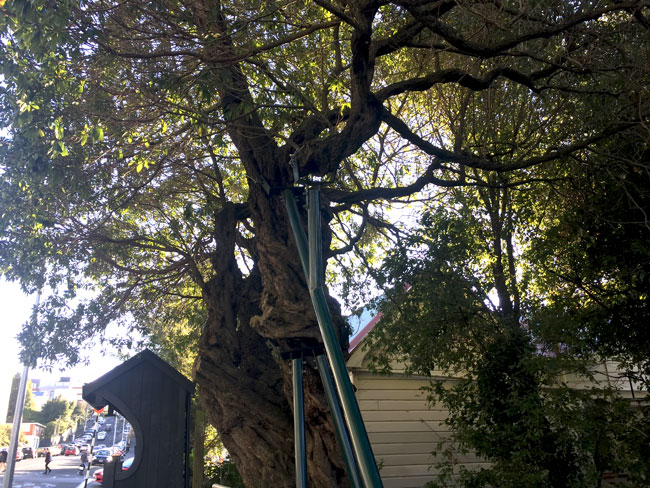 A Ngaio tree could be the earliest tree planted on campus.

Communications Adviser (Operations), Gail Goodger wanted to cultivate those feel-good factors with a series of stories for the Otago Bulletin Board about them both. This third story speculates about our earliest tree.

Mystery surrounds which tree is the oldest at our country’s oldest University, but speculation abounds a Ngaio could be hundreds of years old.

The native tree is propped, braced, and bolted with steel, to save its life, professional arborist Gary McFarlane, of Treeman, says.

Many years ago, another arborist claimed it was about 300-400 years old, but that would be difficult to prove, he adds.

Gary believes the tree is definitely at least a century old and that native trees would the oldest on the Dunedin campus because “all the big old deciduous trees, the oaks, the English trees, they’re only 160-170 years old. They came out on the first sailing ships,” Gary says.

Historian Ali Clarke does not know the Ngaios’s age but does know it is on land that originally contained the oldest building on our campus, wooden Mellor House in Union Street, beside the Water of Leith, where a bridge leads east to the Property Services Division Building.

In Ali’s blog for our University’s 150th anniversary last year, she says as our University expanded, it began buying neighbouring properties, including the home built for English immigrant, printer, court clerk and land valuer Thomas Calcutt in 1862.

“All the big old deciduous trees, the oaks, the English trees, they’re only 160-170 years old. They came out on the first sailing ships.”

“Early on – certainly by 1861 – he acquired all of the land in the block bounded by Clyde Street, Union Street, Leith Street and the river; there were no houses on the land at that stage,” Ali says.

Whether the Ngaio tree was there at this stage is a mystery.

The Meaning of Trees blog by Robert Vennell says Māori were known to rub Ngaio leaves on their skin as repellent, for mosquitos and sandflies. The leaves are studded with oil glands, easily seen when holding them up to the light.

Early farmers also used the oil as sheep dip – covering their animals in it to help ward off parasites.

People chewed Ngaio leaf buds as well to help soothe stomachs, while the inner bark was scraped and rubbed on sore gums and teeth and was said to be effective in easing the pain. The inner bark was also infused with water then used to treat cuts, bruises, ulcers, and skin conditions, according Robert.

The Property Services Division is part of our University’s Operations Group, which has three top priorities:

Enable – the University to achieve its visions and mission

Engage – with our students, each other, our customers and externally

Experience – of our students, our customers, and externally to be outstanding