Breast cancer survivors launch enterprise to give back 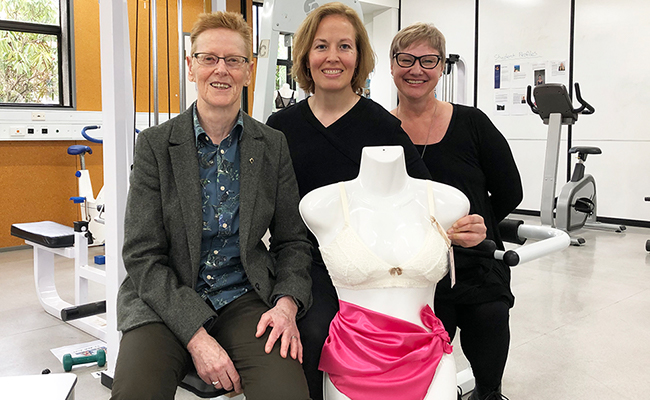 A new social enterprise has been launched by two breast cancer “survivors and thrivers” to give back to the ExPinkt gym which played an important role in their personal journeys.

Touched by Pink was last week launched by Andrea Samson and Lucy Warren, both regular users of the gym since their respective diagnoses with breast cancer.

ExPinkt, an exercise training programme which is based in the School of Physical Education, Sport and Exercise Sciences, was formed by Associate Professor Lynnette Jones in 2009 as a result of supporting a close friend with breast cancer.

Soon after starting the programme, Lynnette’s friend passed away, but it was the strength that Chrissie had demonstrated during her battle with cancer that fuelled Lynnette to keep developing it for other’s benefit.

At about the same time, and as a young mother, Andrea Samson started the ExPinkt programme and met Lynnette when she was diagnosed with breast cancer.

Since then Andrea has kept up her connection with the gym which has included getting involved in research studies by Otago staff and students, and she says the gym has been crucial for her recovery.

“Just to be able to come in here, and be and feel normal, has really helped me get through the whole process,” Andrea says.

Andrea’s friend and pilates instructor Lucy Warren was diagnosed with breast cancer in 2018, and the gym for her is a place where she is able to meet with others, many having become life-long friends.

“As a breast cancer patient, it’s impossible to find lingerie which just meets the basics of being ‘nice and normal’. What’s available is basically beige, boring, and very Victorian, and has the effect of making woman feel like they are a perpetual patient.”

“As a pilates instructor I’m often the one helping others, so to come in here and be helped has been huge.

“And having a really good laugh in here has also been important, as humour is what’s got me through.”

Due to the role ExPinkt has played in helping them thrive, the friends say they always wanted to give something back, and that seeded the idea for Touched by Pink, a social enterprise specialising in lingerie.

“As a breast cancer patient, it’s impossible to find lingerie which just meets the basics of being ‘nice and normal’,” Andrea says.

“What’s available is basically beige, boring, and very Victorian, and has the effect of making woman feel like they are a perpetual patient.”

Seeing this opportunity in the New Zealand market, the pair are sourcing their lingerie from Dana Donofree’s brand AnaOno in the United States, and 5 per cent of the sales of will go directly back to the gym.

Importantly, Touched by Pink has also gained approval as an authorised supplier by the Ministry of Health for the prosthesis subsidy that is available to all breast cancer survivors.

Lynnette says she is incredibly grateful for the support and on-going contribution that Touched by Pink will make to ExPinkt, and it will help the programme continue to be affordable and accessible to all.

Since starting in 2009 approximately 430 women (and now men) have used the gym’s service, and Lynnette says the success of the programme reiterates the important health benefits of physical activity.

“If the benefits of physical exercise could be captured in a pill, everyone would take it.”

All clients to the programme are initially referred from Oncology, and the growing recognition of exercise’s contribution to recovery is thanks in part to Lynnette’s emphasis on developing close relationships and trust, as well as the positive feedback received.

In addition to men now using the programme, the gym is also growing expertise in catering for different types of cancers, and in time Lynnette would like to see it develop into a Centre for Cancer Rehabilitation.

The final word is from a client of the programme who picked up a new Touched by Pink brochure in the gym, remarking to Andrea and Lucy as she left, “thank you, this is something I have been wanting for ages”.