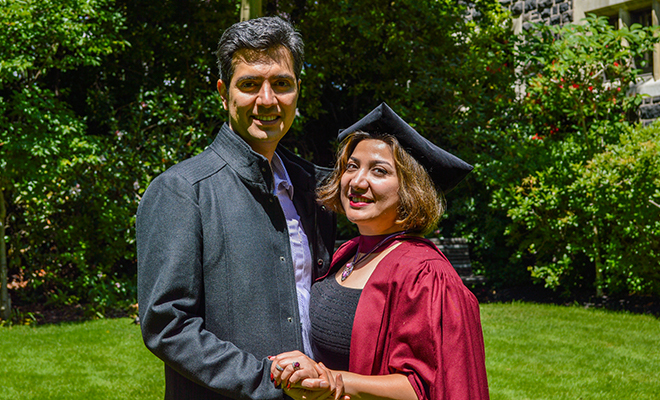 Golnoush’s journey to graduation began in Iran in 2015, when she decided to keep following her passion for science and apply to the University of Otago to do her PhD in Molecular Microbiology. With an undergraduate and master’s degree from Isfahan University of Technology in Iran, she had been working as a lecturer and lab manager at the university for five years.

“I really felt I wanted to learn more and go further, and that was the point I decided maybe I should come out of my comfort zone,” says Golnoush.

“As I had two friends here in New Zealand, in Christchurch, who were doing their PhDs and they were happy about all the facilities and about the country and the people, I thought ‘OK let’s try New Zealand as the destination’ and then I was lucky enough to get a PhD position and a scholarship from Otago, which really made me able to come.”

So she and her husband Parham Hosseini quit their jobs and arrived in Dunedin in October 2015. It was the first time either had lived outside Iran.

Golnoush says she had expected the differences between the two university systems to be greater, but after a year, despite the scientific equipment being better at Otago, she felt that academically it was quite similar to her university back home.

The biggest immediate challenge was adjusting to the language.

“For the first six or seven months the hardest part was talking and thinking and listening in English all at the same time. It was really tough. Sometimes when I went home I really felt like my brain needed a massage,” she says.

“My mother language, Persian, was different and also in Iran in university we did our bachelor and master’s in our mother language, so there was not a lot of exposure to English. Hearing was not an unconscious thing, you really needed to concentrate, to listen, to answer, but after that it was OK.”

She also felt she was lucky to have two supervisors (Professor Richard Cannon and Dr Erwin Lamping from the Department of Oral Sciences) who helped her meet many of the challenges she faced, not just the ones posed by her research.

“Prof Cannon and Dr Lamping were so supportive, not just about my project but also for my personal life, and I really appreciate that.”

Golnoush’s research centres on the biochemical and structural analysis of Candida albicans, a fungus that can cause life-threatening infections in immunocompromised individuals. She investigated drug resistance in C. albicans, which is mainly caused by overexpression of the drug pump Cdr1, which is an important health concern.

“The main focus of my research was a tiny protein located in the membrane of Candida, which is a fungus that can affect the mouth and other parts of the body. Most of the time it’s not harmful unless people are immunocompromised, like with HIV or chemotherapy, so they are more sensitive to these fungal infections, and the problem is antifungal drug resistance.”

Her research developed a reliable method for purifying Cdr1 which, together with the generation of pump mutants, enabled biochemical characterisation of the pump function. Purified Cdr1 protein was subjected to X-ray crystallography and cryo-electron microscopy. The study has revealed important insights into the structure-function relationship of C. albicans Cdr1 and laid the foundations for obtaining high-resolution Cdr1 structure.

“I love to do science, and there was something inside me that liked to learn more about protein fields. It was related but different to what I did before. It wasn’t just biotechnology, but also learning about new techniques and new science, working on a very tiny molecules inside the cells. I think that just made me excited.”

Her PhD is awarded in Dentistry, as it is related to the mouth and dental health, but she says mostly her project was in the fields of molecular microbiology and biochemistry. During her research she was awarded a prestigious grant to study in Germany for six months, learning about the field of electron microscopy.

“Then I brought the knowledge back with me. It was a really valuable, really challenging but worthwhile experience for me.”

Parham also began his PhD in the same lab two years ago, so the pair have once again been classmates for the past year.

Along with her supervisors, Golnoush is grateful for the support of other staff and her classmates.

“We were so close and everyone was just supporting every other person. I really can call them family, they are more than classmates or close friends. I think that was one of the reasons I’ve never felt homesick here, because I have all those people around me to support me or give me the opportunity to help them, it was a really good environment.

She also enjoys working with other international students, as there hadn’t been many at her university in Iran.

“It actually provided me with an opportunity to work with people from around the world, from many different countries. That was really interesting to see the similarities beside the differences. I think that was a really nice experience to realise that OK we are not that much different and human beings are the same, no matter where you are born or grow up.”

She has found New Zealanders in general friendly and kind. “I think the first thing that was really eye-catching for both of us was seeing people just walking and smiling at you and saying hello to you, or if you smile they smile back, without even knowing you.”

After submitting her thesis in February, the country soon after went into lockdown, which Golnoush says she enjoyed because having finished her studies there was no longer any pressure. She started applying for jobs, was shortlisted for two, and offered one at the end of lockdown. She is now working as a Postdoctoral Fellow at the Department of Biochemistry.

COVID-19 is a constant worry for Golnoush and Parham as the situation is not good in Iran and they worry about their families.

“It’s really tough, really hard. It’s like a fear inside – that is always with any person that leaves the country because even without COVID it’s still hard, especially in New Zealand with at least 24 hours flying and the cost of the ticket. But now it’s harder because sometimes I think what if something happens and I cannot go there. I try to be positive and hopeful.”

She says while their families also miss them, she feels mostly they are happy that they have had this opportunity. While the visa situation is currently up in the air due to COVID, which makes planning difficult, she and Parham would like to apply for residency and stay in New Zealand.

“It’s really like home for us here, even without our family. We have really good friends from different countries and have made our community and second family here.”