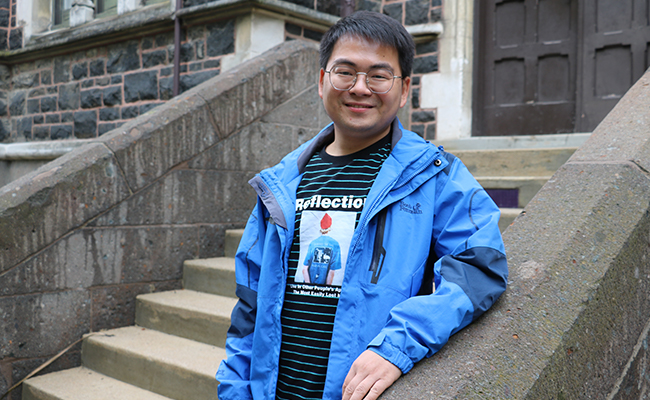 Chinese PhD candidate Yiming Ma went through several quarantines in the past year.

It’s been a long road to Otago for returning and new international postgraduate students who were caught offshore last year.

Some of Otago’s international PhD students have made it to campus following the Government’s October decision to allow 250 international postgraduate students to enter New Zealand.

In early 2020 he returned home to the Hubei Province, China, for what he thought would be a few weeks of holiday before heading to Princeton University, in New Jersey, in February to spend six months working with his collaborator Professor Allan Rubin.

However, on 23 January the Chinese government announced Hubei, the epicentre of the COVID-19 outbreak, was going into lockdown to contain the spread of COVID-19.

“I needed to take a flight from Wuhan Tianhe International Airport to Beijing, and then from Beijing to New Jersey but because the airport closed and the province closed I had no choice. I tried to find some ways. I reported my situation to the government but they declined my application. I didn’t give up,” he says.

“We still produced new results and I kept in touch with my own supervisors here and reported my new progress and results. That time was good. I had some very nice flat mates but I didn’t go outside. That was a very big pity because it was my first time visiting the US, I had thought I could see America.”

He finally got approval to leave his province after a thorough health examination and two weeks self-isolation. He travelled to Jiangxi Province and planned to take a flight from there to the United States in early February but then another hurdle came.

The US government announced travelers who had spent 14 days in China immediately prior to landing in the US were banned from entering the country.

“Because I had already left Hubei, I could not go back because as all the transportation to Hubei was closed. Everything was so uncertain, and I was facing so many changes. My mind was blank – I totally had no idea what I should do. I thought maybe I should come back to New Zealand so I booked a flight.”

Again his plans were dashed when the New Zealand Government also announced travel restrictions on travelers from China. Stuck in yet another unfamiliar province, he decided to fly to Bangkok, Thailand. Before he could leave he had to go through another 14-day quarantine in China and arrived in Bangkok on 22 February.

“During that time [in Bangkok] I knew it was not good to go outside. I thought maybe I should stay away from the public to not spread the virus. At the time I was not sure if I had it or not so I thought it was better to just stay at the hotel the entire time.”

By the time Yiming finally arrived in the US in early March COVID-19 had spread across many states, Princeton University was closed and his accommodation had fallen through.

Being a PhD student he had to continue his research and so he had weekly meetings with Professor Rubin.

“We still produced new results and I kept in touch with my own supervisors here and reported my new progress and results. That time was good. I had some very nice flat mates but I didn’t go outside. That was a very big pity because it was my first time visiting the US, I had thought I could see America.”

When his six-month stay in the US was over he had to consider what his next step would be. The New Zealand border remained closed to non-residents.

He flew back to China on the only flight out of the US. After another 14-days in quarantine the border to New Zealand remained closed.

After three months back in China the New Zealand government announced 250 international postgraduate students would be granted border exemptions to return to the country and continue their studies. Yiming touched down at Auckland International Airport on 30 December and went into his fourth quarantine.

Now he’s back on campus Yiming is continuing his research into mathematical and statistical modeling of slow slip events and enjoying Summer with his friends.

“I appreciate the help from my supervisors, Fabien Montiel and Ting Wang, as well as Rachel Spronken-Smith, the Dean of the Graduate Research School, they helped me to fix every problem I had.” 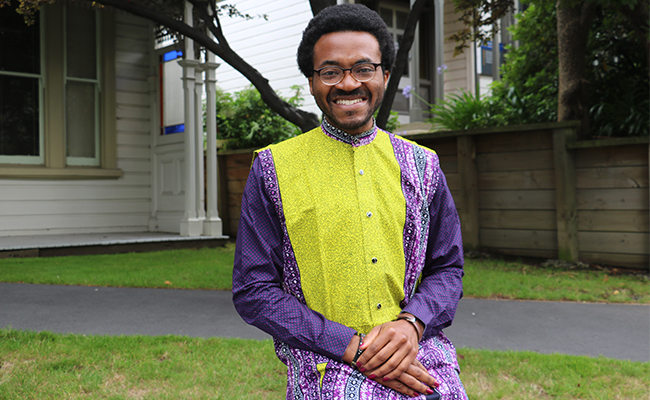 “It was a bit like dominos falling. Each day something was happening and my well-laid out plans were all falling apart,” he says.

Once the New Zealand borders closed Obren was stuck in Germany, which had already gone into its own lockdown.

“My situation was particularly interesting because I was stuck in a third country [having studied in the United Kingdom and then Germany]. I was not in my home country, that added an extra layer of stress and uncertainty but thankfully I’m here now.”

Fortunately, he was able to begin his PhD research remotely with the help of his supervisors at Otago – Professor Michael Schultz, Professor Rhiannon Braund and Kristina Aluzaite.

“I kept to New Zealand time so I worked through the night and slept during the day in Germany. I am fortunately a night owl so I was able to function. I did that because it was easier to align with my supervisors but at least it helped with preventing jetlag.”

The New Zealand Government’s announcement allowing some postgraduate students into New Zealand came at the perfect time for Obren.

“It came at the most opportune moment because that was the moment I could literally not do anything else. I had done everything that I could and so my PhD was on the cusp of stalling, which would have been terrible. For that I consider myself blessed and highly favoured.”

Obren began the process of applying to get into New Zealand. Once accepted and having his visa approved the “wild ride” to get a space in Managed Isolation and Quarantine (MIQ) began.

On Christmas Eve he was working through the night in tandem with his sister constantly refreshing the MIQ website. By Christmas Day at about 10.10am morning they fortunately booked a space on 27 December, so by 11.25am Obren was in a cab to the airport for a 2.30pm flight out of the country.

“I literally had one hour. I had to essentially run out of my home – escape. Until the very moment I got on the plane it was a wild ride, like something out of an action movie.”

When he arrived in Auckland he was whisked off to his quarantine hotel.

“It was lovely, the hotel is a 4-star hotel. There are worse places I could have been and of course it’s very important. I’m a health scientist – the MIQ system is really the best system that New Zealand could have used in dealing with the pandemic.”

After 14 days in quarantine he arrived in Dunedin and began to settle in.

“It could have gone a lot worse if I was not here now. Of course, it’s still not easy. There are things that I had to move around but now that I am here I hope to catch up, but by and large it could have been a lot worse.”

More international postgraduate students are expected to arrive at Otago throughout the year following the NZ Government’s announcement last week.that 1000 more international students will be granted entry to the country.