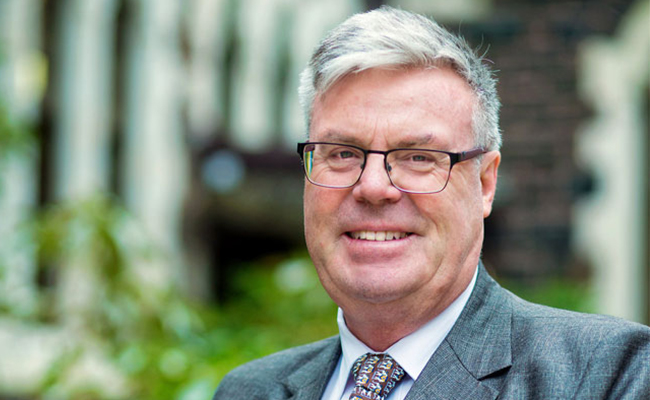 A man who has significantly improved the way our staff and students work and play has retired from the University of Otago.

As Campus Development Division Director, one of many construction projects David Perry oversaw was the most complex in his extensive career – even more complex than the new Dunedin Hospital building and “I don’t think many people realise that”, he says.

The Eccles Building for animal research has extremely tightly controlled environments to stop diseases breaking out and contamination – people must even shower and change clothes to enter some spaces.

Chief Operating Officer Stephen Willis has valued his director’s extensive contractual knowledge and rational appraisal of legal issues – Mr Perry has been on all three sides, as a principal, consultant administering the contract, and a contractor.

At Mr Perry’s retirement function, Mr Willis said: “I thank-you for your incredible contribution to our past, present and future … you will forever remain a well-loved and highly respected colleague and mentor of mine.”

For the Willis family, Mr Perry and wife Louise will also remain kiwi ‘grandparents’ to two-year-old Albie, who just decided that was their role.

While leading his division, Mr Perry supported staff with his vast knowledge, was always up for robust debate – with a whiteboard on hand for anyone not following his thinking – and readily moved on from any discussion. He also played a significant role in developing some careers.

But Mr Perry describes his time at Otago as brief compared to many staff the Chief Operating Officer has handed long service certificates during Operations Group forums.

However, in almost five years Mr Perry has developed his division and overseen 12 projects, including the:

Mr Perry believes working at Otago has been “an absolutely great way to finish a career, I feel very privileged to have worked at the University”.

He was originally drawn to the campus more than 30 years earlier, when working as a quantity surveyor in Dunedin, managing the finances for construction projects.

His involvement with the Walsh Building’s new west wing had just finished when University Architect Colin Pilbrow phoned for advice and Mr Perry thought “that would be interesting, nice place to work”.

When he did start at Otago in 2016, the west wing had just been demolished for the new dentistry Clinical Services Building.

Then, Mainzeal Property and Construction offered Mr Perry a move to Wellington with Louise and their two sons, which was “probably the best thing I could’ve done because the size and scale of the projects was far, far bigger than in Dunedin”.

He was involved with the new Majestic Centre – the capital’s tallest building, – refurbishing the Reserve Bank building, and the Wellington Town Hall.

Another son was born in Wellington, before a move to Christchurch, where Mr Perry’s projects included the new Christchurch Railway Station and The Bridgewater Apartments.

But the Christchurch earthquakes in February 2011 brought them back within a year.

“Two sons were stilling living there … and just hearing their stories and from friends how difficult it was … I felt a little bit guilty living in a lovely place where everything was great.”

Then he became our University’s fill-in Capital Projects Unit manager while still at Savills, and a year later was our first Campus Development Division Director.

Now, Mr Perry is available for more cricket scoring and has been sounded out about basketball administration work.

Being an Otago representative basketball player for seven years had flowed on to being Canterbury Basketball Association president and on the Basketball New Zealand board, while a chance offer to score for his St Albans Cricket Club carried on to University Grange Club in Dunedin, with stints at the New Zealand A match against the West Indies in Queenstown, Hawke Cups, Otago A games, and national age group tournaments.

Mr Perry is also a keen music concert goer and is looking forward to more, as the pandemic allows.

His wife Louise will keep working as a Mercy Hospital operating theatre nurse for a few years and he will also be popping up on campus on request for project contractual work and procedure development. In fact, he was back the Monday after he retired.