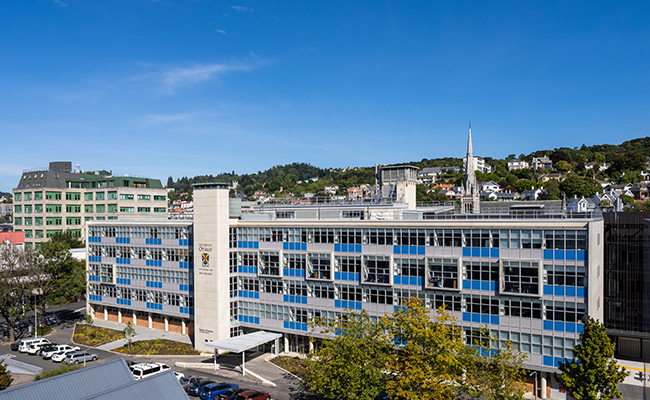 The opening of the revitalised heritage Walsh Building signals the completion of the national centre for dentistry’s five-year expansion project.

University of Otago Chancellor Dr Royden Somerville QC officially opened Walsh Building, the original home of the nation’s much-prized ‘dental school’ that provides treatment at an attractive cost for the community, on 9 March.

When the historic modernist Walsh Building was completed in 1961 in Great King Street, people streamed in. Its clinics grew to provide about 76,000 dental treatments annually, with the cost recognising patients play an important role in helping to educate the students. This service continues today.

University of Otago Vice-Chancellor Professor Harlene Hayne says retaining the Walsh Building’s architectural authenticity – including the multi-coloured stand-out modernist glass façade so many patients, students and staff had passed through as a front entrance – was imperative.

The single glazing has been replaced with a double-glazed replica that matches the original as closely as possible and the main entrance has been retained, she says.

The building has a similar rear façade which was also replicated, except for a refurbished portion that is now internal and visible from closer-up inside a new atrium that links the Walsh Building to a new patient treatment facility behind it, the four-storey Clinical Services Building completed in 2019. 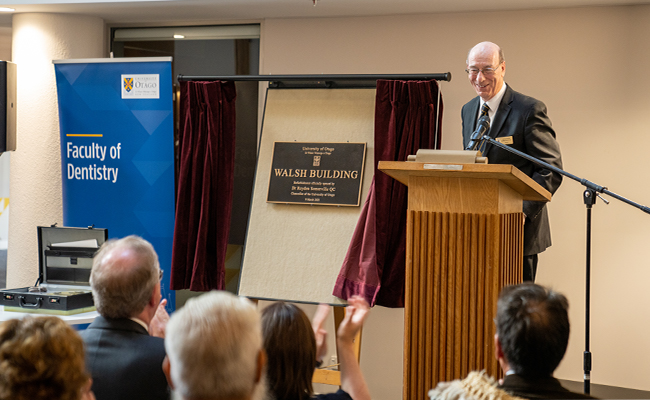 Both new buildings are part of the $130 million project to expand and update the Faculty of Dentistry’s facilities. The Walsh Building is the final part of that project.

Professor Hayne says retaining the Faculty’s main location:
• Embeds its place in local and social history
• Combines existing and new features to help ‘tell’ the story of the evolution of:
- The home of New Zealand’s only ‘dental school’ since 1907
- Dentistry nationally and internationally
• Reflects the importance of dentistry to New Zealand and an institution which looked to being a leader in both education and research – and still does today
• Lets the public get a close-up insight into the development of modern movement architecture in this country

Pro-Vice-Chancellor Health Sciences Professor Paul Brunton says the Walsh Building was gutted for its refurbishment and is gradually being reoccupied, bringing together dispersed staff, students, and laboratories from around the Dunedin campus – creating a single home for the Faculty that should enable more collaboration between academics, clinicians, and students.

He is a strong advocate for translational bench to chairside research, which is specifically designed to improve outcomes for patients by having multi-disciplinary teams translate useful knowledge gained dealing with patients into new devices, procedures, and treatments – when validated by clinical research.

Professor Brunton hopes the new buildings will help get the Faculty back into the top 10 globally based on QS World University Rankings by subject – currently, it is in the top 50. 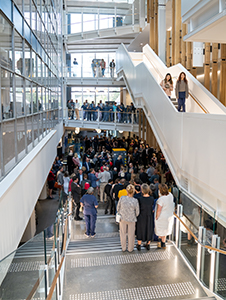 The opening of the Walsh Building

Faculty of Dentistry Dean Professor Mike Morgan, himself an Otago graduate, says the overall expansion project should serve the Faculty for at least the next 50 years while also helping recruit and retain world-leading students and staff in a highly competitive international market. The Faculty trains dentists, oral health therapists (therapists and hygienists) and dental technologists.

Walsh also includes a dental training simulation suite – each of its 80 dental chairs has a mannequin torso with a removable jaw, dental equipment, and a video screen for watching teaching demonstrations.

Overall, the Faculty of Dentistry is the most modern hospital-level dental teaching building and research facility, Professor Morgan has seen – he is very proud of the facilities. 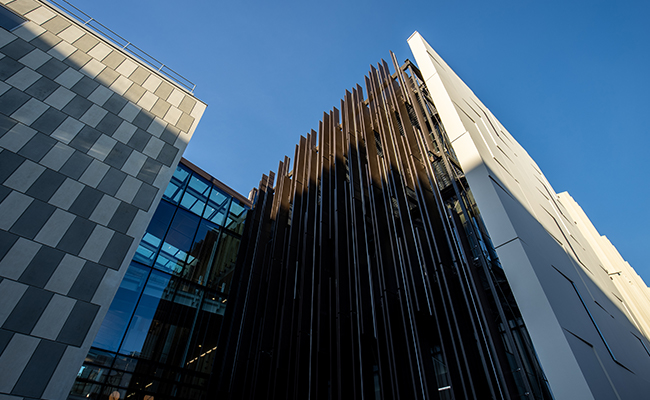 The exterior of the revitalised Walsh Building.

Walsh’s original rendered northern and southern facades were simply cleaned, and the four Frederick Staub (1919-2012) sculptures on the south end are scheduled to receive attention. The original internal vertical feature stairs were retained and upgraded to meet current requirements. The lift towers and foyers also remain – but the lifts themselves were replaced.

For the curtain facades, the replica glass was fabricated in Christchurch to modern thermal and seismic standards, while matching the three original glazing shades of clear, grey, and cobalt blue. The double glazing reduces energy consumption and increases internal comfort levels.

The project also aimed to improve or mitigate any unsympathetic alterations made over time that compromised the building’s functionality, Mr Willis says.

The Walsh Building is named after the third dean, Sir John Walsh, who strengthened the Faculty of Dentistry’s scientific and clinical base by providing modern research facilities and introducing postgraduate programmes in the early-1960s, when the Faculty moved into its third dental ‘school’, which was renamed the Walsh Building in 2001.

Sir John was the driving force behind getting the school built, which was no mean feat when the government was considering relocating it to Auckland at that time.
He was an advocate for water fluoridation in New Zealand but will probably be best remembered for his patent and construction of a high-speed air turbine handpiece (1949), which is very similar to the high-speed handpieces used today.