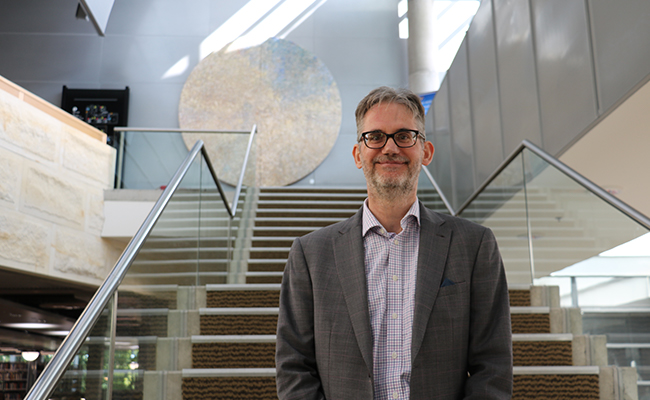 Otago’s new University Librarian didn’t expect to accept the role in early 2020 only to still be stuck in the United Kingdom a year later.

Mike Wall, originally from Nottingham, finally made it to campus on 1 March after a long journey with more than a few speed bumps along the way, including an unexpected tussle with COVID-19 in managed isolation.

However, decades before he was thinking of moving across the world to Otago, Mike was a sport science undergraduate student spending hours doing research in libraries.

“Over the period of doing my research as an undergraduate I saw there were massive variations in the qualities of libraries.”

He realised he could utilise his own strengths to improve the experience for library users, he says.

After working in public and hospital libraries he made his way to the University of Bristol where he worked in multiple roles in libraries for 26 years.

He then took up the role of Deputy Librarian at the Durham University.

When the role at Otago popped up it seemed to be perfect timing for a new challenge.

Mike initially went through the interview process for the job back in late 2019. He and his wife Wendy travelled to New Zealand for the final round of interviews in February 2020 and upon leaving he was offered the position.

When he made it back to the UK he accepted the position and began the process of applying for visas.

Meanwhile, COVID-19 was beginning to spread worldwide and the UK was on the cusp of going into its first national lockdown.

Then New Zealand closed its borders.

“I had four days when I was really unwell and that was really tough. I was in an unfamiliar environment and in a hotel room on my own.”

“I had this period of waiting. It wasn’t until August when we could start the process again and then the first border exemption application was rejected,” Mike says.

The second application was successful so the next hurdle was to book a spot in Managed isolation and quarantine (MIQ).

After both receiving negative COVID-19 tests Mike and Wendy were cleared to travel to New Zealand. They touched down on 26 January and were whisked off to an MIQ hotel in Auckland.

The couple decided to take a cautious approach to protect themselves from COVID-19 while in isolation.

“We'll still protect ourselves, we’ll not go out, we’ll stay in the room. We have a balcony to get fresh air.”

Then on day eight in isolation Wendy started having symptoms of COVID-19 and tested positive. The pair were moved to the Jet Park Quarantine facility.

It seemed inevitable that Mike was going to get COVID too, so he stayed with Wendy.

However, after three days he was still testing negative he was moved to another room. 5 days later he tested positive.

“I had four days when I was really unwell and that was really tough. I was in an unfamiliar environment and in a hotel room on my own.”

Wendy was released from MIQ before Mike, so she headed to Tauranga to spend some time with the couple’s son before making her way south to prepare their new home.

Finally, the couple both made it to Dunedin COVID-19 free and Mike was able to set foot in his office and get to work. His role as University Librarian is to ensure the Library contributes to research, education and external engagement with academic staff, students and external communities whilst working in close partnership with professional service colleagues.

“Being able to meet colleagues face to face to learn about how the Library can and should contribute to the success of the University has been brilliant.”