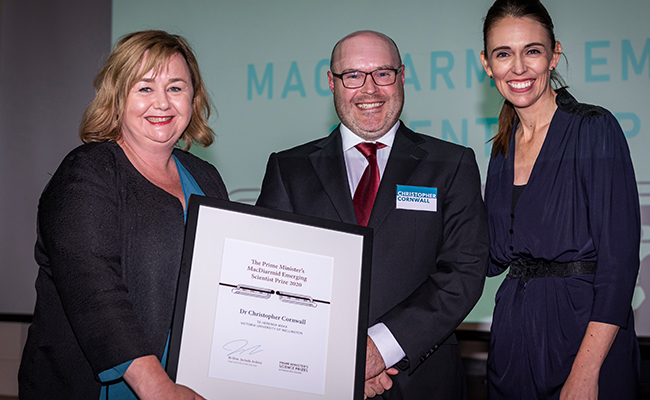 Winner of the 2020 Prime Minister’s MacDiarmid Emerging Scientist Prize, Dr Christopher Cornwall, says it is “exactly the right time” to highlight the type of research he is doing into how marine organisms will fare under climate change.

Dr Cornwall is a Rutherford Discovery Fellow at Te Herenga Waka – Victoria University of Wellington, in the School of Biological Sciences. He worked as a Research Assistant at the University of Otago from 2008 to 2010 and graduated from Otago with a PhD in Botany in 2013.

He says he was “pretty elated” to receive the award, which brings with it $200,000 which he will use to continue his research into the impact of climate change on both New Zealand and global marine environments.

“It’s just a great achievement and made me feel all of the hard work that has gone into my career to date has been acknowledged. It’s a lot of work and it’s been really complex. It takes a lot of man hours to complete, and the award justifies all that hard work, for me and my colleagues,” says Dr Cornwall.

A first-in-family scientist, Dr Cornwall says he gained a love of biology “fossicking around rock pools while my dad was off fishing”.

“We have these wonderful reefs right on our backdoor steps, these huge kelp forests or temperate reefs, right outside our place of work, for example, and we are so close to these tropical reefs in the Pacific and Australia, so New Zealand is a great place for budding marine biologists to learn their trade.”

At Otago, he credits his PhD supervisors Associate Professors Catriona Hurd (formerly Botany, now a Professor at the University of Tasmania) and Chris Hepburn (Marine Science) for helping shape the trajectory of his career. He also currently collaborates with Dr Christina McGraw from the Department of Chemistry, and Dr Peter Dillingham from Mathematics and Statistics.

In July, he will take up the role of leader of the Understanding theme in the Centre for Research Excellence for Coastal People: Southern Skies, which is based at Otago. Working collaboratively from Wellington, he will contribute to research which considers the role of climate change in the NZ marine environment and how species respond to the effects.

Keen to increase awareness of the impact of climate change by sharing his research with the public and within schools, Dr Cornwall says the Prime Minister’s award provides a great opportunity to highlight the types of problems the marine environment is currently undergoing.

The money from the award will go towards monitoring how the marine environment is coping, particularly around Wellington, and to further his research into species changes and the genetic mechanisms that underpin species. This research has found that some species can resist climate change by keeping internal conditions consistent, and he is looking at why some species can gain tolerance to changes in their environment.

Dr Cornwall’s research focuses particularly on the impacts of ocean acidification on marine organisms, including seaweeds and various calcifying algae and corals.

Ocean acidification is the result of changes in seawater pH levels due to increasing levels of atmospheric carbon dioxide. His research seeks to understand how climate change will impact the ability of calcifying species to grow.

These calcifying species include iconic species such as pāua and kina, but lately most of his research has been on organisms called coralline algae, a calcifying seaweed, which creates the foundation of reefs in temperate environments, such as New Zealand, as well as forming the backbone of coral reefs in tropical waters. These coralline algae not only create a home for a wide range of organisms but they also use chemical signals to advertise it as a good home for many species.

“Coralline algae is the pink stuff you see on the rocks and they are really ecologically important. They are what we call the foundation species in these reefs. They cement the reefs together in the temperate zones and in the tropics, but they also act as a required settlement substrate for marine invertebrate larvae. They emit a chemical cue into the water that tells the larvae it’s good to come back to that reef, that it’s a good place to live.

“Without these coralline algae we wouldn’t have tropical reefs but also, here in New Zealand, the species we love so much –pāua and kina – their invertebrate larvae also rely on this settlement substrate for their existence.”

As carbon dioxide increases in the atmosphere, the oceans are becoming warmer and more acidic.

“Ocean acidification is a process of decreasing seawater pH and this is caused by the increases in carbon-dioxide in the atmosphere, and this carbon-dioxide is absorbed into the surface waters of the world’s oceans. It decreases what we call seawater pH – so making it less alkaline, moving towards increased acidity. What it also does is change the types of carbon that are available in seawater. Together these two processes impact the ability of calcifying species to grow and make their skeleton.”

Through his research, Dr Cornwall sought to understand the underlying physiology of how these organisms lay down calcium carbonate in their skeletons and how climate change and more acidic oceans can disrupt this process.

When he started, scientists understood that ocean acidification would badly impact the growth of these calcifying species, but they didn’t really have a good handle on why.

“For the first time ever, we used boron isotopes to determine the pH levels inside the coralline algae where they lay down this calcium carbonate.

His research showed there was a range of specific traits in corals and coralline algae, and, while some were able to resist ocean acidification, most of them were not.

“So unfortunately, for the majority of species, they were quite sensitive to its impacts and what would occur here is they would reduce their growth rates and their settlement rates. Essentially in the future, they are most likely to be out-competed or completely cease to exist.”

He said the timing of this loss was difficult to predict, but probably over the next 20 to 30 years there would be large changes in the species we have here in New Zealand, with some outcompeting others. “We have probably already lost some species already.”

The next chapter of his research was to see if species could gain the ability to tolerate ocean acidification over one lifetime or multiple generations.

“Unfortunately, we found that over one lifetime they cannot gain these traits, but the next step was looking to see if they could gain these traits over multiple generations. We ran an eight-generation experiment and found that after six generations of exposure to ocean acidification, this one specific species of coralline algae gained the ability to resist the effects of ocean acidification.

“This research has taught me a lot about the processes involved in potentially safeguarding some of these species in the future. Some species may be able to adapt naturally, and we could use what’s called ‘assisted evolution’ to help with some of that, to speed this process up by growing them in the lab and then out-planting them in real reefs.

“But I think, unfortunately, the real reality of the situation is that climate change is happening on such a vast scale that our ability as humans to mitigate this locally is a drop in the ocean, so to speak, compared to the amount of reef space that’s out there, so I don’t think we’d be able to feasibly save species from ocean acidification and ocean warming using assisted evolution.”

After determining the mechanisms that enabled resistance or sensitivity to the effects of ocean acidification, the next question he sought to answer was ‘how will this scale up?’

He has been leading research with a team of 21 coral reef scientists who have been modelling how coral reef growth will function in the future at different carbon-dioxide emission levels, assessing more than 200 highly biodiverse reefs.

“We took real reef growth and the cover of corals and coralline algae, put that together with our projections, to understand how each of these 233 reefs will function in the future in terms of their growth rates.

“Importantly, what we found was that these reefs will be badly impacted by both ocean acidification and warming. Our ability to keep CO2emissions down is really the best way we can protect these reefs for the future.”

The urgency of the situation is one of the reasons he is keen to share his research with schools.

“One of the really important things about marine climate change is that it’s really urgent that people understand the message, because this generation of kids who are coming through school for example, they’re the ones that are really going to have to deal with this problem, so understanding that it is a problem and how can we do things to change this problem, is a message that really need to get out there.”