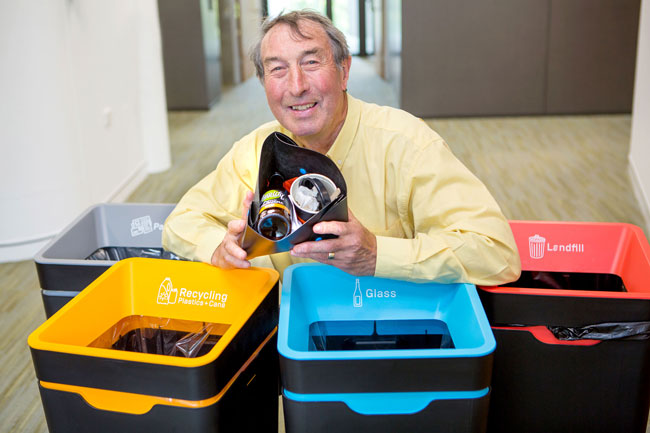 In his element … Property Services Division Waste and Recycling Manager Graham Musgrave – now retired – was a driving force for pre-cyclers and the waste stations staff empty the pre-cyclers into.

The waste our Dunedin campus sends to landfill annually plummeted by half much, much earlier than expected, but efforts are not stopping there, Sustainability Office Head Ray O’Brien says.

The University set the target four years ago of halving the whopping 5019 tonnes that went to landfill in 2012 by this year, then smashed that goal two years early – when waste dropped by 62 per cent to about 1908 tonnes in 2019.

Now the University is working towards halving the 2018 waste total of 2660.57 tonnes through a partnership with Waste Management NZ – we have already slashed our waste to 1518 tonnes last year, a drop of 43 per cent since 2018, he says.

Mr O’Brien believes such strong progress started with the drive of retired University Waste and Recycling Manager Graham Musgrave, who always said it was a real team effort, involving a host of staff at their desks and on committees, along with a new contract.

Trucks now weigh waste from every skip and the company has based a waste coordinator on campus who teams up with staff to find waste and recycling solutions that work for their areas.

New recycling options also began rolling out in earnest inside Dunedin buildings in September 2019 and now cover about 15 buildings – along with the Wellington campus and the Auckland Dental Facility. On average the new options have led to 35 per cent more being diverted to recycling, Mr O’Brien says.

The new recycling options involve rubbish bins at people’s desks being replaced with desk-top ‘precycler’ containers – for paper, cans, and plastic – that each person delivers to a ‘station’ of colour-coded bins. This is based on the well proven Method Bin system of waste management.

Most floors have at least one station made up of four bins, one each for paper, glass, co-mingled waste (plastic, aluminium, and tin) and general waste. University-wide, about 1456 bins make up the stations so far.

The cleaners keep the waste streams separate, taking waste from the stations to outside skips, which are each designated to specific types of waste. Previously, those cleaners were emptying each staff member’s rubbish bins and staff ‘s recycling options were less visible and accessible

While the pre-cycling option has not been popular with everyone because it changed how we used to do things and their daily routines, most people have adapted well and accept we all need to change what we do if we want to look after our whenua (land), Mr O’Brien says.

Mr O’Brien wants to thank staff who are making the most of the new opportunities, encourage more staff to get involved, and remind people the choices they make when requesting products can be powerful – by choosing the least packaging possible or recyclable packaging, and saying no to single use plastic items.

While reducing waste going to landfills starts with shopping smart, the other recognised steps are:

Anyone wanting simple tips for reducing, reusing, and recycling can visit the Sustainability Office or Ministry for the Environment webpages.