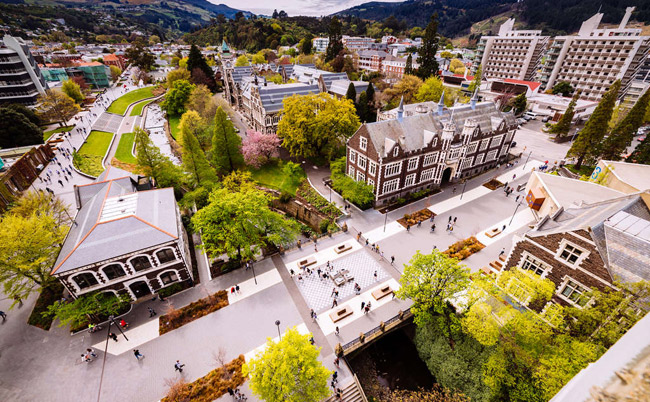 There are four key areas the University is highlighting in its submission to the Dunedin City Council's draft 10 year plan.

The University is worried about an inadequate focus on campus-area parking, not having student flat-specific glass recycling options, delays in upgrading Dunedin’s tertiary precinct – including aging water and sewage pipes – and city council charges adding significant costs to building projects.

Those are the four key areas the University is highlighting in its submissions on the Dunedin City Council’s draft 10 year plan, for 2021-2031, says Chief Operating Officer Stephen Willis.

The draft plan does not emphasise parking in the tertiary precinct despite it being a “very real issue” – the University supports about 3800 full-time staff and 21,000 students, and the area is also home to the Otago Polytechnic.

Dunedin’s central city transport network – largely unchanged for about 50 years – also creates several barriers for people coming into and moving around the city centre. These include the one-way state highway system dividing the central city, so the University would prefer a public decision being made about that system rather than it falling into the too hard basket, he says.

Problems with rubbish and glass in the student flatting area of North Dunedin fail to appear in the plan as well.

The city council has been treating North Dunedin like a typical residential area, but the amount and type of waste a flat of six or eight students produces is very different to a typical family’s. Student flats also generate a lot of rubbish at the start and end of each term, Mr Willis says.

So, North Dunedin glass recycling bins are frequently overflowing, while rubbish bins and recycling bins litter the footpaths. The University is doing what it can, but the issue needs to be identified in the 10-year plan so possible options are discussed with Dunedin residents.

The University is currently involved in its largest and most complex building programme and the neighbouring Otago Polytechnic is growing as well, so we both need the city council’s help – to improve the surrounding streets and ageing infrastructure, he says.

But the city council’s draft plan proposes pushing back the Tertiary Precinct Upgrade to the 2030s. The project’s aims are to:

Improve safety and accessibility for all users (people who walk, cycle, scoot, take the bus)

Lift the look, vibrancy, and atmosphere of streets near both campuses, while also celebrating the tertiary precinct’s special character – by creating a more people-friendly space with new paving, street furniture, lighting, and public art

Renew underground stormwater and wastewater pipes – the stormwater pipes along Cumberland, Great King, and Fredrick streets were all installed before 1900.

We acknowledge the city council has financial pressures, just as the University does, and we both have to balance a range of priorities, especially in this pandemic environment, but we have been here before – the city council’s previous 10 year plan, introduced in 2018, suggested work could begin in about 12 months, Mr Willis says.

More recently, we were expecting an upgrade ‘living design’ to start in Union Street West in February this year, which would have involved making temporary changes and asking students for feedback so more changes could be made in response to their thoughts.

The ‘living design’ was to run in parallel with – and contribute to – the detailed business case for the upgrade, which would have been presented to the city council for a decision about whether to proceed.

The University’s construction and refurbishment costs could also rise significantly if the draft 10 year plan remains unchanged. It proposes developers pay 100 per cent of extra services the city council has to provide for the growth their development creates, boosting the University’s development contributions by 80 per cent, he says.

We are urging the city council to ensure the increase is justified and fair, given it could “significantly” affect whether our projects are affordable.

The University is saying that error should be corrected – then the increase in our development contributions would be about 50 per cent, Mr Willis says.

University of Otago Chancellor Dr Royden Somerville QC is speaking to the University’s submission at the 10 year plan hearing today (Wednesday 12 May 2021).