Helping us become a zero hero 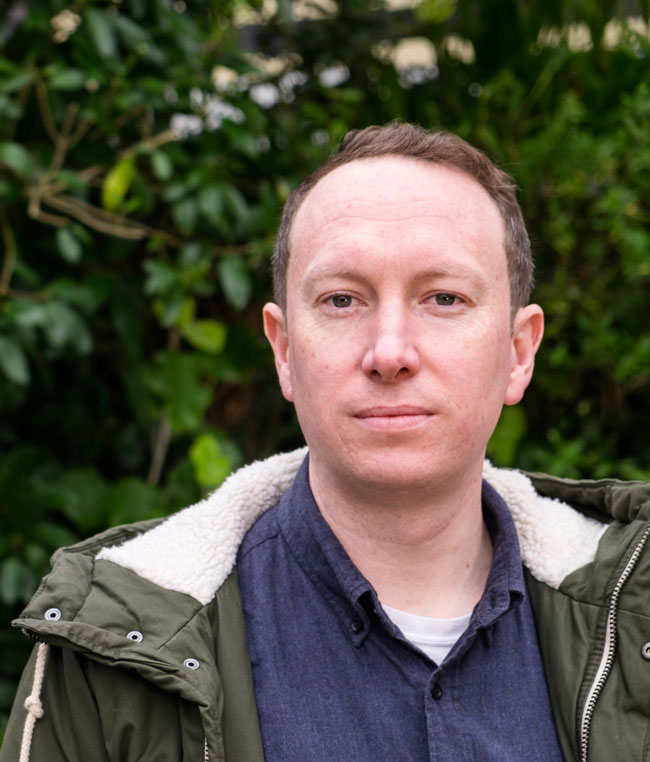 “If you can’t make a living as a writer, you might as well try and save the world – it’s a pretty good plan B,” Craig Cliff says, with a gentle smile.

The University’s first Net Carbon Zero Programme Manager is often asked if he would prefer to be a fulltime writer – he was one while a University of Otago Burns Fellow, in 2017.

He was helping make sure school buildings were fit for purpose and operating effectively, while minimising their carbon footprint, “which was really a new frontier for the Ministry of Education, and for me personally”.

“I was very aware of the challenge of climate change. I loved things like bird watching and gardening and tried to ride my bike as much as possible. But it was a revelation to find my day job actually starting to help the environment.

“Climate change is the biggest existential threat we have, and it can be disempowering if you fixate on how big the problem is and not knowing where to start,” however helping schools become more energy efficient also helped Craig switch from feeling climate change was overwhelming to looking for opportunities to combat it.

“That’s what our Sustainability Office is trying to do, break it down into manageable ‘chunks’.”

“When this job came up, it was really kind of perfect – the stars all aligned”.

Craig could not only significantly boost his involvement with sustainability but working at a university meant staying involved with researchers.

At the ministry, he worked closely with researchers to understand the latest thinking on the best physical environments for pupils and teachers. At Otago, he is “talking to inspiring and switched-on researchers every week about how we can do better by the environment as a University, a nation and a planet”.

His wife Marisa could transfer her job from Wellington to Dunedin, Craig could use the infrastructure knowledge he gained during 11 years at the Ministry of Education, and Dunedin had good schools for Lia (8) and her brother Caio (6).

His family was keen to move because the Robert Burns Fellowship had ignited their love for the city and South Island.

Why not fulltime writing?

Before taking up the literary residency, Craig had already published two books – a novel, The Mannequin Makers (2013), and the short story collection A Man Melting, which won Best First Book in the 2011 Commonwealth Writer’s Prize.

Although Craig enjoyed the luxury of writing fulltime during the fellowship, he believes he has still not experienced enough of life “to just shut up shop and write book after book”.

Also, when the Burns Fellow residency ended “I still had bills to pay, mouths to feed”.

“I've made the choice to live in New Zealand, have a family and a mortgage and be a writer. I can have it all, just not all at once or all the time.”

As a child, Craig liked coming up with stories that created new worlds, and “as a teenager my refuge was the Palmerston North Central Library. That’s where my love of books really took off. I’d sit in one of the comfy chairs overlooking The Square and devour books about Norse Mythology and Jungian psychology and novels by David Coupland and Kurt Vonnegut.”

But on hearing Craig wanted to be a writer, the careers’ guidance counsellor at his conservative high school asked what he was going to do for a job and Craig’s family thought the same way, so he focused on having parallel careers.

At Victoria University, his double degree reflected that approach – a Bachelor of Arts in English Literature and a Bachelor of Commerce and Administration majoring in Accounting and Finance.

The next year, Craig won the novice category of the BNZ Katherine Mansfield Short Story Competition with Another Language and his story Copies was selected for Essential New Zealand Short Stories edited by Owen Marshall.

Writing of a different sort

When Craig’s wife was doing her master’s degree, in forensic science in Brisbane, he started working for the Queensland Treasury, where he quickly gravitated towards policy work – gathering information to understand a problem then creating a business case about the advantages and disadvantages of potential approaches, along with the rational for a preferred approach.

It brought his two careers together, using literature’s creative and communication skills in business.

After Craig’s first novel was published, having children made getting the time to write “a real balancing act”, so being Burns Fellow gave him a valuable opportunity to have an income while writing his second novel full-time – Nailing Down the Saint, was published in 2019.

His time in Dunedin also included a trip to Italy for research and collaborating with the Department of Computer Science to train a Recurrent Neural Network on lyrics from Dunedin Sound bands so a computer could create ‘found’ poems from those lyrics, for the Dunedin Writers & Readers Festival.

Craig researched a piece on the changing techniques New Zealand short story writers have used over the years as well, for the Dan Davin Short Story Conference in Invercargill.

Now, he is still reviewing books for outlets such as The Listener and working on a short story. However, while he used to get up at 5am every day to write for 90 minutes, he currently manages that two times a week at most.

“I’m taking it easy on myself in this year of change. I’m making time for my family, and spending a lot of time at open homes …”

And with short stories, “you can have so many things on the go. If you don’t feel like working on your depressing story, you can work on your funny story …”

Next year, he could return to writing novels, which has typically involved “a tilt at the margin between the weird and the routine, art and life, past and present”.

Taking a year off does not hurt too much, because the accountant in Craig knows that if he keeps writing a book every seven years, he could still produce “a pretty good shelf”.