Have doctor’s bag, will travel 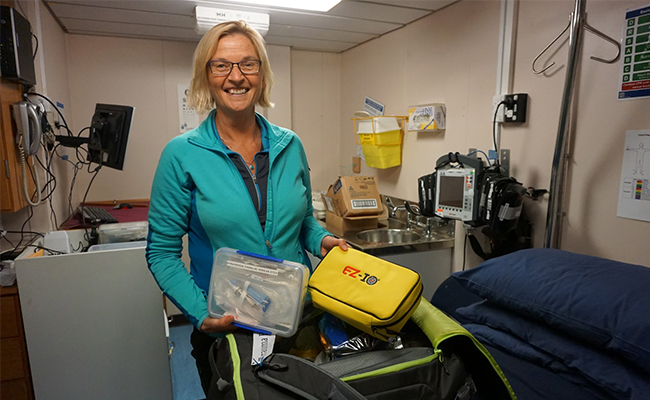 Phoning home to get specialist medical advice while struggling to stay upright on the storm-tossed deck of a ship in Antarctic waters is just one of the many stories Dr Jenny Visser, the convenor of the University’s travel medicine programme, is able to tell about a life in expedition medicine.

Dr Visser has led the postgraduate interdisciplinary travel medicine programme from the Wellington campus since 1999. It’s a role she balances with some serious adventuring, as ship’s doctor on NIWA voyages to Antarctica and working in remote regions, including the Himalayas, Bougainville and the highlands of Fiji.

This year, she completed her eighth trip as ship’s doctor on a six-week voyage to Antarctica on NIWA’s research vessel, the Tangaroa.

It’s an experience which never disappoints.

“The scenery is outstanding and it’s that realisation that you know not many people will have the opportunity to come here and do that. On one of the trips we went to Terra Nova Bay and we just came in on the most glorious calm morning and spent the whole day there.

“I remember at one point going and sitting up on the bridge and just taking in all of this magnificent scenery, the snow on the mountains, Mount Melbourne in the distance and realising this is a part of the world that explorers and people on cruises will see, but it is going to be outside the reach of many, many people.

“The wildlife is incredible. On the 2015 trip, we came very close to humpback, blue whales and orca.” 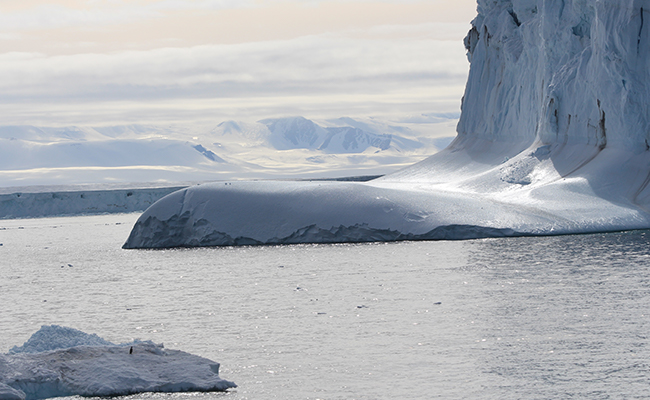 The view from the deck of the Tangaroa

Dr Visser says it is a relatively light workload caring for the 40 crew and scientists on board compared to work at a busy GP practice, but she does have to be prepared to deal with emergencies when and if they arise.

“You’re constantly aware that you’re a very small vessel in the middle of this huge ocean and if something were to go wrong, either with a person, or mechanically with the ship, or you got stuck in ice, then it could be days before any help was available.”

Dr Visser has analysed the illnesses and injuries she’s treated on her voyages for a research paper published in the Journal of Travel Medicine.

She says the vast majority of the work involves treating the same types of illnesses and injuries as a GP would deal with routinely, but she always needs to be prepared for more serious situations.

One of her most enduring memories is the day she had to take a satellite phone out on deck to seek a second opinion from a specialist in Wellington.

“It was quite rough and the ship was pitching and rolling and there was horizontal snow, and I called the Wellington Hospital switchboard and then I got cut off. So then I rang Wakefield Hospital and asked to speak to one of the specialists and I said, ‘I’m calling from Antarctica’, and they said, ‘that’s really interesting! What are you doing in Antarctica?’”

She was put on hold and ended up in the bizarre situation of listening to Home on the Range, while struggling to stay upright in the stormy conditions on the deck.

Fortunately, she was soon connected to a specialist who was able to reassure her that her judgement on a case was correct.

The experience reinforces what she teaches students studying expedition medicine – that often a doctor working in a remote environment will call simply for a reassuring second opinion.

“They might get a call from a colleague, and be thinking, ‘well that’s a really basic question’ but what they want is simple reassurance that their judgement is correct.” 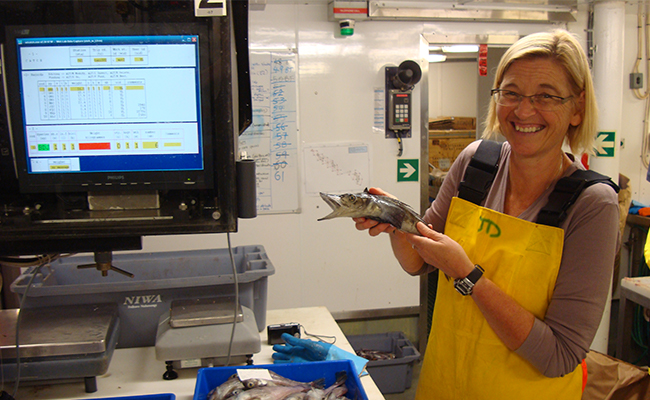 Dr Jenny Visser in the wet lab on the Tangaroa. Photo: Darren Stevens/NIWA

The light workload as ship’s doctor meant Dr Visser, who gained a BSc in zoology and botany before turning to medicine, was able to volunteer as an extra pair of hands to assist scientists on deck with their research.

“In 2004 on the BioRoss voyage where they did a huge amount of biological sampling, they just had enormous amounts of material that needed to be sorted, so I volunteered to help out and I ended up on the invertebrate team and doing 12-hour shifts with biologists from midday to midnight, being there to sort samples.

“It meant going out on deck in full survival gear, sometimes in lovely conditions, but often in pretty awful conditions, and wading through buckets and buckets of mud and looking for tiny little specimens. The hands-on work seeing creatures being pulled up from the depths was quite amazing.

“Sometimes they would find a new species, or sub species. I was amazed to find there is coral in Antarctica, so there are things you would never expect to be there. There are crabs and fish and creatures like ice fish, which don’t have haemoglobin so their gills and blood are white and transparent.”

As well as voyaging to Antarctica, Dr Visser has worked as a medic on Australian adventure travel company Inspired Adventures’ trips, trekking in the highlands of Fiji, climbing Mt Kilimanjaro in Tanzania and walking the Great Wall in China. 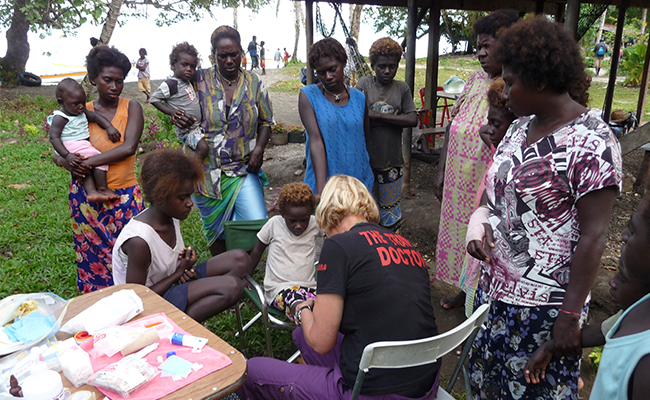 She’s also volunteered for a fourth-month stint providing treatment to porters in the Himalayas, in a village called Machermo just below the Gokyo Lakes at an altitude of 4,500 metres.

There were challenges of a different kind, when she signed on as doctor for the film crew of Mr Pip working on location in Bougainville and living on a run-down former dive charter boat.

“It was a choice between having the air conditioning or the pumps on to pump the sewerage and the grey water out because if you had both going at the same time, the system was overloaded. So I decided, from a health perspective, we needed to have flushing toilets and emptying showers. It was so hot, with no air conditioning.”

It was her first time working on a film set. They were long days, starting at 6am and finishing at 6pm, filming in a tiny village.

“It was fantastic fun. As soon as I set up my medical kit for the crew, the entire village would queue up for all sorts of ailments. Most of them were extras in the movie anyway, so they became temporary employees.” 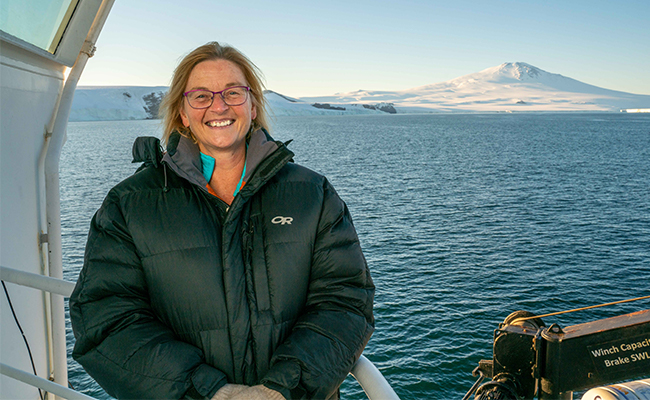 Dr Jenny Visser on the deck of the Tangaroa at Wood Bay. Photo: Stu Mackay/NIWA

The COVID-19 pandemic has had a major impact on her work as a travel doctor. This year’s NIWA voyage to Antarctica went ahead as planned in January, but with new equipment on board – a COVID-19 analyser and with plans in place should a crew member test positive.

“Everyone got swabbed on day one when we presented to the ship, and I had to train to run the COVID-19 analyser. It gave us a bit of extra reassurance, and we had protocols in place that if someone tested positive we would turn back.”

The pandemic has meant some changes to life on land as well. Dr Visser previously shared her role at the University with a part-time job at the Travel Doctor in central Wellington, but the business closed down last year when COVID-19 border closures brought an end to tourism. She now works as a GP at an MIQ facility, and has joined the COVID-19 vaccination effort.

While the future for dedicated travel medicine clinics is uncertain, Dr Visser says there continues to be a role for further education in travel medicine.

“The whole point of the postgraduate programme is to ensure that general practices and practice nurses have the tools and education necessary to be able to deliver good and safe travel medicine.”

She says there will be an ongoing need for travel medicine practitioners to advise on the new risks posed by COVID-19.

And with New Zealanders starting to head off to bubble destinations this year, there remains a need for travellers to be prepared for diseases other than COVID-19. In the Cook Islands, for instance, travellers must be made aware of the risk from mosquito-borne diseases dengue fever and chikungunya.

“Those diseases haven’t gone away.”