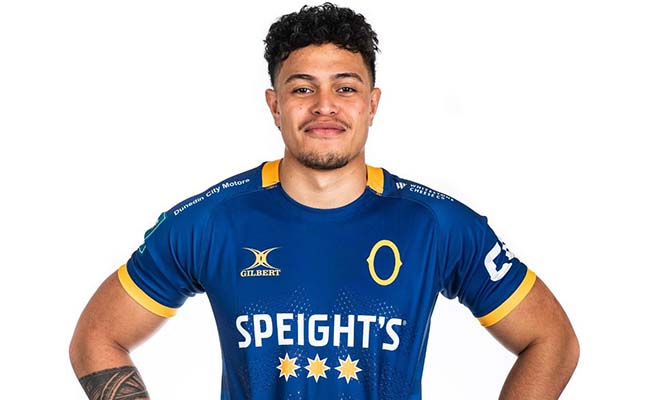 Christian Sio-Willie was selected for the Otago-A rugby team in his fourth year.

With a qualification in Dentistry and a promising rugby career on the horizon, Christian Lio-Willie’s time at Otago was a balancing act.

Christian will be graduating with a Bachelor of Dental Surgery on Saturday, 11 December, and credits his network of support for getting him to the finish line.

“My time at Otago has definitely made me who I am today. I thoroughly enjoyed every minute of it, every moment. All the ups and the downs, all the uncertainties. I came down here empty-handed and I’m leaving with something on my back to keep me secure.”

He applied for a $20,000 Otago scholarship on a whim in 2017, after already securing a Physiotherapy scholarship at AUT.

“I don’t know why I applied, I knew my mum was going to say no because Dunedin was too far away.

“I ended up getting that scholarship and it was a massive boost. I knew Otago had the best health professional courses.”

Christian came to Otago to become a physiotherapist but applied for Dentistry upon learning of the limited Pacific representation in the dentistry workforce.

“I was all about Physio in my first year, but at the back of my mind I thought ‘maybe I could do Dentistry’, but I didn’t really bank on it.”

He received offers in both Physiotherapy and Dentistry while at home in Auckland after finishing Health Sciences First Year.

“It was massive, my whole family was there, it was a pretty special moment at home.

“My parents were so proud, and they’re proud to this day.”

“I saw that dentistry was quite hands-on, sort of like a trade, but with people,” he says.

Being from the Moana himself, Christian’s understanding of Pacific culture meant he knew what he could offer the profession.

“The whole stigma of going to the dentist is scary in itself, especially for someone who is brown in New Zealand.

“It would be nice to have someone there who can relate to these groups a bit better and make them feel more comfortable.

“If one has a good experience, then the effect it has flows through that person’s family and the connections that they have. It’s the whole Pacific Islander family thing.”

Christian says he is grateful for those who helped him throughout his qualification, especially his mum and dad who would call every couple of days.

“I surrounded myself with a good group of friends who were all working towards the same sort of goal.

“I would also catch up with people at the PI Centre, like Eric Nabalagi. He used to text me for a catch up, and those would keep me on track, they’d kind of pull my head back to earth.”

Meanwhile, Christian’s rugby career has progressively flourished alongside his studies. He joined the Kaikorai Demons upon arriving in Dunedin but dislocated his shoulder at his very first game.

“I was out for the whole season, which ended up being good for my studies – a blessing in disguise,” he says.

In his second year he played for his club team as well as the Otago development team, which gave Christian an outlet for his stress.

“It gave me balance. Training was a place I could release and not think about what test or assignment I had next. It was sort of my down time.

In his fourth year, Christian got selected for the Otago A-team and knew that balancing both rugby and his studies would be a challenge.

During this time, Christian relied on the support of his three main professors who ensured he was “set to sit the next test” and had “sufficient clinic time in between each training session”.

Due to the pandemic, Christian will not be able to attend an official graduation ceremony, but says it’s “surreal to cross that finish-line”.

“It’s been my whole family’s life goal from the start. It’s good to have something to show for it, especially for my mum and dad.

“My family has been right behind me from the beginning. It won’t just be me graduating, it’ll be my whole family too.

“I’m so grateful for the journey that I’ve had so far, I’ve been blessed.”

With his studies behind him, Christian will now focus on his rugby career but is determined to maintain his dentistry training on the side.

“I’m in the process of finding a job that keeps me practicing my clinical skills at least once a week, because I don’t want to be losing that.”

Christian intends to pick up dentistry at the end of his rugby career, with a dream of owning his own practice one day.

“I’d love to bring my own brand, with a Pacific flavour, to the dentistry world.

“It’s a massive goal of mine, to set myself up with my own practice, which will hopefully set up my family as well.”

Christian is in discussions with his peers about creating a super-clinic in the future, inspired by Te Kaika.

“It will be a place where there’s doctors, physios and other health professionals in one big establishment.

“I like the idea of a one-stop-shop for health.”

He believes his time at Otago will leave a lasting imprint on his life.

“My time at Otago has definitely made me who I am today. I thoroughly enjoyed every minute of it, every moment. All the ups and the downs, all the uncertainties.

“I came down here empty-handed and I’m leaving with something on my back to keep me secure.

“You get to learn so much about yourself that makes you a better person in the future. I think that’s the only way to grow, really’.”