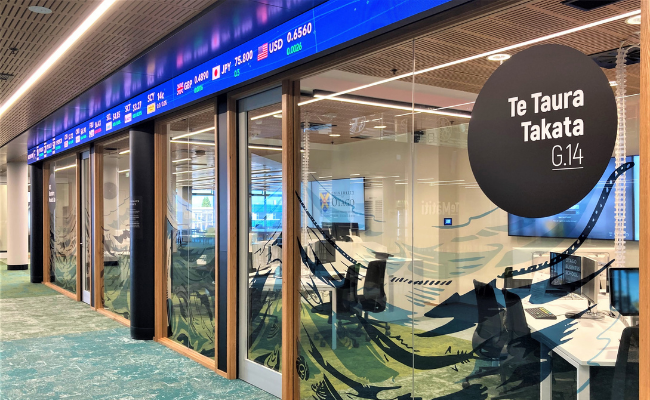 Te Taura Takata is the first trading room in the country to include a cultural narrative in its design that reflects the historical importance of the site to both Māori and settlers.

The Otago Business School’s newly built BNZ Bloomberg Markets Lab Te Taura Takata is the first trading room in the country to include a cultural narrative in its design that reflects the historical importance of the site to both Māori and settlers.

Gifted the name Te Taura Takata (The Ties That Bind) by the University’s Office of Māori Development, the design elements of the trading lab space extend further than simple room aesthetics, and work to illustrate the past, present and future significance of the room.

“Before the extensive land reclamation around Otago Harbour Te Awa Moana Ōtākou, the setting of the Otago Business School would have overlooked the water,” Jennie Henderson, Prospect Researcher in the Development and Alumni Relations Office, says.

“The harbour has always been rich in resources and underpinned significant economic activity where, in the early 1800s, local Kāi Tahu traded pigs, flax, potatoes and other resources with European sealers and whalers.”

The 1848 Scottish Free Church settlers also traded with Kāi Tahu nearby, to the south of the Otago Business School, in the present-day Exchange area, because this area was both parties’ original landing sites.

With this shared significance the location grew to become the heart of the city, with New Zealand’s first post office, later known as the Stock Exchange building, erected there by architects Mason and Wales.

In subsequent years, the building was repurposed as Dunedin’s first museum (1868), before becoming the first home of the University of Otago (1871-1878) and then the Colonial Bank and Bank of New Zealand (1878-1899) when the University outgrew the premises.

“The links between the University and the Stock Exchange building continue to this day,” Ms Henderson says.

The large brass bell, currently sitting outside the University’s Geology building and struck by PhD candidates on their graduation, is the original bell from that building.”

The run-down building was demolished in 1969 and the bell found its way back to the University via the Dunedin City Council and the Meridian Mall in time for the University’s 150th celebrations in 2019,” Ms Henderson says.

The Business School’s link extends beyond the physical land though to the businesses people of the time as well, having developed long-term relationships with both the New Zealand Stock Exchange (NZX) and Bank of New Zealand Te Pēke o Aotearoa (BNZ) over those formative years.

In 1869 at the first University Council meeting it was agreed that BNZ would be the bank of the Council and, since then, they have contributed generously to the University through grants and scholarships.

A donation given by BNZ in 1974 even led to the redevelopment of the Universities Union St Bridge into a piazza, with a plaque and time capsule commemorating this. 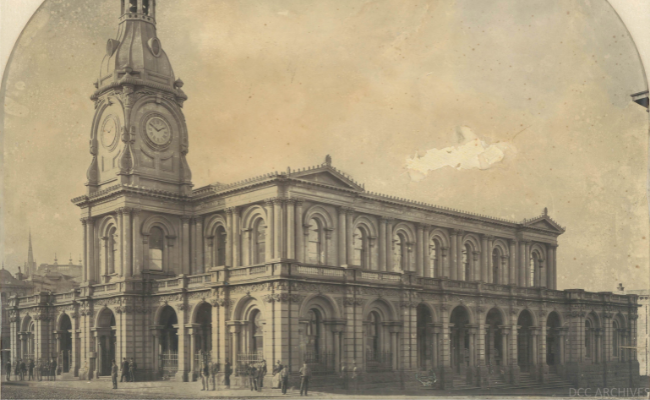 This historical relationship has extended to the present with both the NZX and BNZ sponsoring the building of the BNZ Bloomberg Markets Lab Te Taura Takata.

“The sponsorship from BNZ and NZX and other donors is greatly appreciated and has made the establishment of this Lab a reality” Graeme Mullin, the Development Manager at Otago Business School says.

“As New Zealand’s Exchange, Te Paehoko o Aotearoa, we’re driven by a big ambition for our country that’s been core to our purpose since the origins of the stock exchange more than 150 years ago in Dunedin. The Māori translation of our name “Te Paehoko o Aotearoa” captures this well – meaning the exchange-place of New Zealand.

“In Te Taura Takata we celebrate this very essence and the value we can create by bringing investors together with opportunities – enabling businesses to access the capital they need to grow, creating new jobs and solutions that are shaping a brighter future.”

BNZ General Manager of Māori Business, Rēnata Blair says the Bank of New Zealand and the University of Otago have enjoyed a long association, dating back to the establishment of both institutions in the 1860s.

“BNZ opened its first Dunedin branch in December 1861. It was one of the earliest branches of the bank and quickly became the biggest branch, partly due to the success of the Otago goldfields.

“BNZ is incredibly proud of the inclusion of the Māori motif and design that reflects the historical significance of the site. It reflects the sense of place in the trading centre and we commend the University of Otago for its integration of Maori design.

“Embracing the iwi narrative ensures the future leaders of our economy who use this lab will have an awareness of the rich history of Māori in its origins. It recognises the importance of Māori to the Ōtākou area and acknowledges the local Kāi Tahu iwi who continue to play a key role in the current and future social, cultural and economic life of the South Island,” says Blair.

With such a rich history shared amongst the Kāi Tahu, European settler, Scottish Settlers, the University, BNZ and the NZX, artist Madison Kelly (Kāi Tahu Kāti Māmoe), had a challenge ahead of her to capture this all visually.

“The design for this trading space speaks to a meeting of two fishing lines – one of iron and one of bone – across a dynamic whakapapa of moana, whenua, kaimoana and people,” says Kelly.

She explains that understanding light, reflection and movement was the key to the success of lure fishing in the waters of Ōtakou and that, whether by the activity of trade within, or by passing lights and people outside, “our moana and its resources flow across the glass, ready to be activated by exchange”.

Teaching in the Lab space has already begun over the summer period, with the Director of the BNZ Bloomberg Markets Lab, Dr Muhammed Cheema, ecstatic to see the final product come to fruition.

He stated that the Lab will provide students and faculty with access to real-time and historical financial data, news and analysis and will be used extensively in various University courses.

“Furthermore, Bloomberg’s materials help students in doing assignments as well as their honours and master’s theses; the use of the Terminal is a major asset for students in the job market,” says Cheema.

Professor David Lont the Project Lead for the lab shared Cheema’s sentiment…., believing that the space will provide students with an invaluable experience.

“They will be operating on a platform that is state-of-the-art in both functionality and design,” Professor Lont says.

“The space embraces the local iwi and, as a member of Puketeraki myself, I’m very proud of the fact that we have a trading room that showcases the traditional values of the Māori economy to inform and educate students on a different world-view.

“It gives a sense of pride for the school motivating and inspiring students to wander about the world of finance and accounting, inspiring them to find out a little bit more.”

Thank you to the University community to allow the business school to go down this journey.

Ultimately, the building of Te Taura Takata serves as both a homage to Dunedin history as well as being an effort towards bettering its future by actively investing in education.

“It’s powerful to see the relationships of the past leading to the development of this space in the present,” says Pro-Vice Chancellor and Dean of the Otago Business School, Professor Robin Gauld.

“The Otago Business School hopes that all who engage with the space, step away having learnt about the site’s historical importance, as well as having gained knowledge that can equip them for the future.

“We hope that the space serves to commemorate and celebrate the past, present and future of business in Dunedin.”