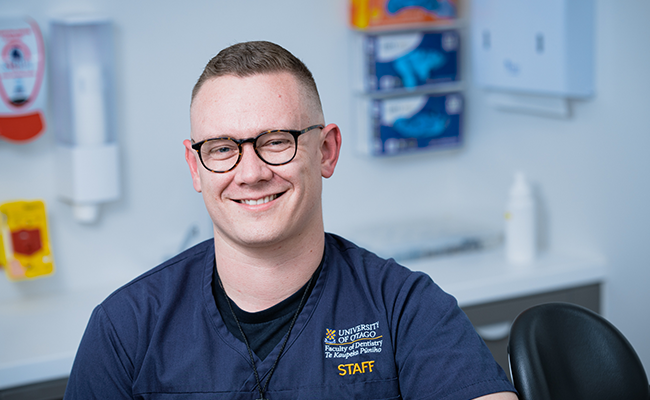 There has been a poignant return to Te Kaupeka Pūniho the Faculty of Dentistry for its newest Associate Dean Māori, who is determined to drive change in what he says is an inequitable dental health system.

Samuel Carrington (Te Arawa) has been settling into his new role as Associate Dean Māori replacing Emeritus Professor John Broughton who retired last year, after being his deputy since 2016.

The faculty holds fond memories for Samuel, who made the decision to move to Otago from Auckland after speaking with the University of Auckland’s Māori student support network.

He completed the Certificate in Health Science up north before realising he needed to make an important decision for his future.

“In my whānau, we have people who are doctors, marine bioogists, nurses – quite high achievers,” he says. “I wanted to do something I wouldn’t get compared to and no one had done anything teeth wise, so that was a big driver for me.”

He applied to the Faculty and was accepted in late December 2009 into the Bachelor of Oral Health. Then came the tricky part.

“I’m the oldest of three, and so when I got the email to say I got in, I was dreading telling mum a few days before Christmas. There were tears, and questions about why I was doing this, but ultimately they understood.”

"Seeing that the system isn’t fit for us, part of the driver for me was changing that system and instilling that drive in our students as well.”

The community-centred approach of the Bachelor of Oral Health proved to be the right path for Samuel. After graduating in 2012, he worked at a number of community hubs throughout the Wellington area. While he thrived working in Naenae and Miramar, it was a kura kaupapa Māori in Seatoun that helped reaffirm to him why he worked in oral health.

“There were these kura kids that were only coming in by appointment only rather than someone visiting the school, which was weird. I met with the kura principal and asked what was up, and she said that about 10 years ago they didn’t feel safe with the kaimahi, so they stopped the in-school visits.  I asked, ‘How do you feel about me coming in? And they were all good with me going in.”

As a result of the advocacy, 70 of the tamariki became dentally fit, highlighting the importance of the community-centred approach for him. The position continues an impressive rise for Samuel, who started as a Professional Practice Fellow in 2015, and then was promoted to Lecturer in 2019. He recently submitted his Master of Public Health thesis while being a full time lecturer, and hopes to start his PhD in the future.

Samuel says there have been considerable leaps for tauira Māori at the University since he graduated in 2012, something he credits to Kōhatu, the Māori Health Workforce Development Unit, and Emeritus Professor Broughton.

“When I was here as a student, in total there were 12 Māori undergraduate and postgraduate students collectively, and now there are 40 plus. There were three tauira Māori in my class, and this year there are eight graduating from the Bachelor of Oral Health, which blows my mind knowing they’ll go out there and look after our people.”

Despite these gains, Samuel recognises there needs to be change in what he describes as an inequitable dental healthcare system for Māori. Most children will have around half a tooth rotten by the time they turn five. In Māori children, that number spikes to three and a half teeth.

“I’m not going to be able to rattle the cage enough being a practitioner out there. I need to come in, work my way through the University, get influence from stakeholders and try to get that change for our people. Seeing that the system isn’t fit for us, part of the driver for me was changing that system and instilling that drive in our students as well.”

As part of the role, Samuel arranges events including the annual mihi whakatau for the Faculty of Dentistry students, which is unfortunately unable to be held this year because of ongoing COVID-19 restrictions. Students will, however, be welcomed personally by him and colleagues, and events will resume as soon as restrictions allow.