Hidden Talents: A penchant for pencils 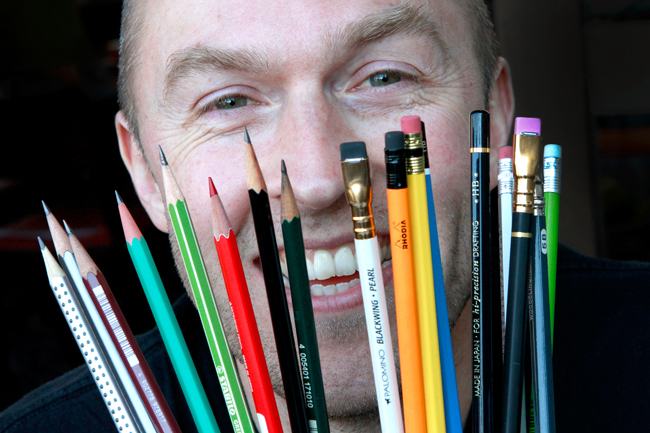 Dr Mike King with some pencils from his collection. Photo: Sharron Bennett.

While he is quick to point out that his collection is more of an interest than a talent, Bioethics’ Dr Mike King takes pencils seriously. He spoke to the Bulletin about why he has written off the pen.

If a pen is mightier than a sword, then what does that make a pencil?

Dr Mike King, a lecturer in Bioethics, has developed a bit of a passion for the pencil, after reading an article about an American political cartoonist who had begun an “artisanal pencil sharpening business” a couple of years ago.

A bit of a passion is possibly an understatement, given that Mike has gone to great lengths since to avoid using pens.

“So I decided to get some pencils, and it spiralled from there.”

The relative simplicity of the pencil, which is a great contrast to the complexity of its creation, is one aspect that fascinates Mike.

“There is this neat essay, ‘I, Pencil’, by Leonard E. Read, which looks at the creation of a pencil and claims that no single person knows how to make a pencil. It takes hundreds of people, from all over the world, to create a single pencil.”

Graphite is mined, refined, mixed with clay and other materials, pressed into lengths, then dried, kiln-fired, and soaked in wax. The “leads” (which contain no lead) are then glued between slats of wood that have been dried and coloured, and carved into pencils. Paint covers the wood, words and images are stamped in foil along the length, and in some pencils a metal ferrule is used to attach an eraser, which can be made from a range of materials.

While most of us are familiar with classroom pencils in New Zealand, overseas pencils are taken much more seriously.

In Japan, where “handwriting is taken quite seriously”, the Tombow Mono 100 is considered an excellent example, while in California, the Palomino Blackwing pencil attempts to recreate the smooth writing and drawing experience of the famous, discontinued Eberhard Faber Blackwing 602 (which bore the slogan “Half the Pressure, Twice the Speed”).

The typical Warwick, Staedtler and Faber Castell brands here pale in comparison to the names given to American pencils – the Black Warrior, Prospector, Microtomic, or the Jubilator anyone?

For Mike, though, it’s the smell of childhood found in pencil shavings, the potential procrastination opportunities having to sharpen pencils provides, and the sound of them on the page, which have driven him from the ball-point.

“They’re just wonderful to use.”