Giving it Back: A Master of water and fire

While waiting to head out for a fortnight at sea, the Master of Otago research vessel Polaris II Bill Dickson takes the time to become the focus of the first profile in the Bulletin Board’s new volunteer series “Giving it Back”, dedicated to staff who share their skills and time with the community. 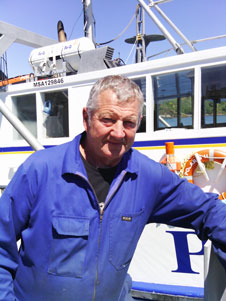 If you see Bill Dickson shoot away from the Portobello Laboratory in his truck during the day, don’t worry, he’s just off to help someone in dire straits.

When not spending around 100 days a year at sea running the Polaris II, Mr Dickson works maintaining the lab’s boats. He is occasionally interrupted by his dual community roles as Station Officer with the Portobello Volunteer Fire Brigade and as a member (and current President) of the Coastguard Dunedin Unit.

Mr Dickson, who is a long-time Otago Peninsula resident, says, “About 16 years ago the local volunteer fire brigade struggled to find people who could respond to calls during week days. This was before I worked on the Polaris and I was mainly looking after the lab’s small boats and diving gear. The lab manager didn’t mind me doing the community thing.”

Mr Dickson says he and 16 other Portobello Brigade members respond to 80 to 90 calls a year.

“Most of our calls are for first-response medical assistance, we do a lot of training around that. The city ambulances are about 25 minutes away, so they need somebody there a bit quicker.”

Mr Dickson is also involved with around a dozen Coastguard Dunedin call-outs each year.

"There is a lot of paper work and a lot of people don’t bother any more. But Portobello’s a wee community and I’ve been here most of my life. It’s good to help out where you can and give back a bit."

“When I did the small boating work at the lab, we got called to a few boating mishaps. Twelve years ago we wanted to set up a Coastguard unit in Dunedin and the local police got in behind it. Five of us from the fire brigade are in the Coastguard as well.

“As I’m one of very few Senior Masters in the area, I go to look after the mate and crew. We don’t get out very often, not until something goes pear shaped. The police will send out someone to have a look in a helicopter, and make the call if we’re needed. If there are missing people searches we get involved in that, too. Right now we’re getting to the time of year when people dust off their boats and realise too late that they haven’t done their maintenance.”

Mr Dickson says volunteering isn’t just about turning up with your hand raised.

“There is a lot of paper work and a lot of people don’t bother any more. But Portobello’s a wee community and I’ve been here most of my life. It’s good to help out where you can and give back a bit.”

If you volunteer, or know someone who does, and would like to feature in our new column, please do get in touch, Email: bulletin.editor@otago.ac.nz