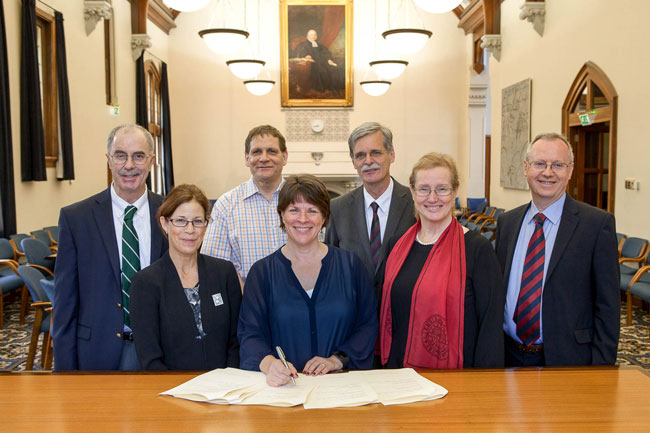 The signing of a second Memorandum of Understanding (MoU) between the seven universities in the Matariki Network of Universities, held at Otago’s Clocktower this morning, cements a relationship begun five years ago.

The Matariki Network of Universities (MNU) is an international group of leading, like-minded universities, each amongst the most historic in its own country, and recognised as being leaders in both teaching and research.

"The Matariki relationships have brought research collaborations and joint publications, student and staff mobility between the seven institutions, the sharing of best/good practice and opportunities to benchmark and work shadow."

Otago has this week hosted the MNU’s Executive Committee, the first time representatives from every university have been together on our campuses.

University of Otago Deputy Vice-Chancellor (External Engagement) Professor Helen Nicholson says the first MoU was signed in February 2011, making MNU members critical friends and trusted partners who support each other to enhance quality in all areas of institutional activity.

“The Matariki relationships have brought research collaborations and joint publications, student and staff mobility between the seven institutions, the sharing of best/good practice and opportunities to benchmark and work shadow,” Professor Nicholson says.

“The MoU signed this morning cements these relationships and demonstrates our willingness to continue working together.”

The Committee meetings have seen the group discussing plans for strengthening common research themes across the universities and exploring the possibilities of joint/dual degrees in the future. Also on the agenda was the development of a global citizenship programme across the network.

Professor Nicholson says it has been a “great honour” to host the MNU Executive meeting and to welcome “our trusted friends” to Otago for the first time altogether.

Matariki is the Māori name for the group of stars known as the Pleiades star cluster, and also known as the Seven Sisters. Similarly, there are seven founding member institutions in the MNU.