It’s lucky Kirsten Eichstaedt’s beagle Taz isn’t a drooler, or her volunteer work with the SPCA wouldn’t have eventuated. Mrs Eichstaedt is the second person to feature in the Bulletin Board’s new volunteer series, dedicated to staff who share their skills and time with the community. 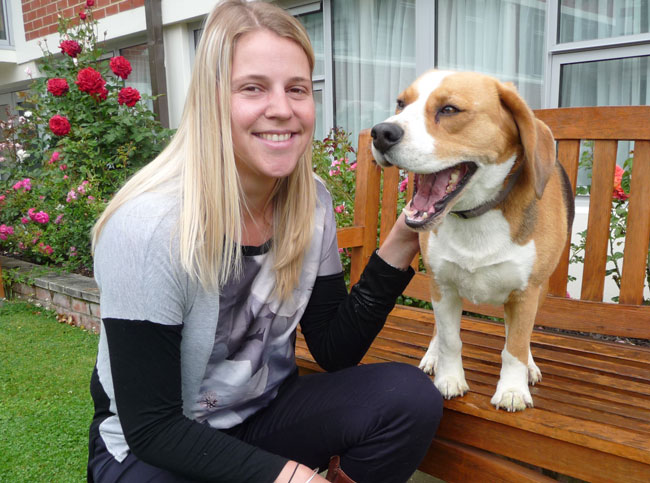 Kirsten Eichstaedt and her beagle Taz - members of the SPCA Dog Squad.

As an animal lover on the lookout for volunteer work, Arana College Assistant Warden Kirsten Eichstaedt has found an SPCA programme that her beagle Taz simply laps up.

Mrs Eichstaedt discovered the SPCA Dog Squad, which coordinates visits by selected dogs and their owners to the hospital children’s ward, rest homes and residential care units around Dunedin.

She explains, “We spend an hour or so once a month making our way around one place, talking to people about their animals and about our dogs. It provides a different activity for those who can’t or don’t have their pets with them anymore. It’s really nice to bring a smile to their faces.

"We spend an hour or so once a month making our way around one place, talking to people about their animals and about our dogs."

“It’s good to give the animal a purpose in life other than being our pet, too,” Mrs Eichstaedt says. “I’ve been part of the Dog Squad for 18 months. I didn’t get in straight away, as there is often a waiting list to join. But as more rest homes and hospitals come on board they need more of us. Most people in the Squad are working, too, so we share it around.

Mrs Eichstaedt says the Squad contains a variety of dogs, big and small.

“You get assessed to see if you and the dog are suitable. Some dogs can’t do it – droolers for instance. My dog isn’t perfect, but he does most of the work, to be honest.

“Taz is everyone’s best friend. He likes to be patted and he’s so busy. He’s the vacuum cleaner, too. The real dog lovers have dog treats in their drawer – Taz gets quite a variety.”

Mrs Eichstaedt says Taz has learned enough about the places they visit to adjust his behaviour to suit.

“With the children in the hospital playroom he can be on ground level with them and it can be a bit more rough and tumble, and with others if he needs to be gentle he is.”