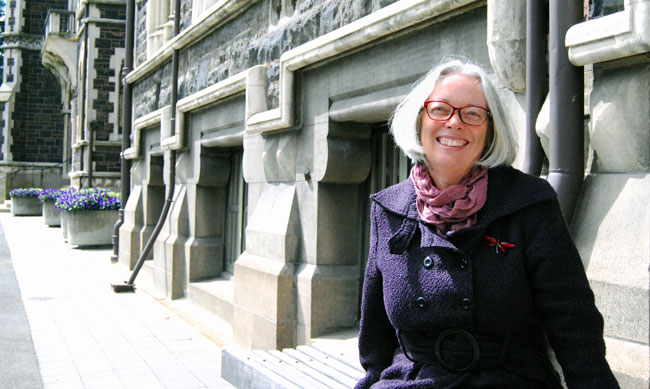 Historian Dr Ali Clarke has been handed a monumental task a century and a half in the making and she couldn’t be more excited about it.

Over the next five years, she is researching and writing a book about the history of the University over its first 150 years.

“It is an enormous privilege and an enormous responsibility. I’m finding it a fascinating and enjoyable project so far,” says Dr Clarke.

Dr Clarke was appointed to the role earlier this year by the Project Advisory Committee for the Sesquicentennial – a committee comprised of a wide range of representatives from across the University.

Committee chairperson, Professor Barbara Brookes says, “the Committee were well aware that a good history takes long-term planning and saw the appointment of an historian to undertake the project as a first priority.”

Uniquely qualified for the task, Dr Clarke is herself a graduate from the University’s History and Art History Department where she completed her PhD on holidays, religion and ethnicity in 19th Century Otago in 2003.

Dr Clarke’s most recent book, Born to a Changing World: Childbirth in Nineteenth-Century New Zealand (Wellington: Bridget Williams Books, 2012) won the The Ian Wards Prize awarded by Archives and Records Association of New Zealand in 2013.
Unlike the previous official University chroniclers, Dr Clarke is able to use today’s modern technology to assist with her research. In May, she launched a blog, University of Otago 1869-2019 ~ writing a history to add an interactive element to her research.

“With the blog I hope to spark interest in the project by sharing interesting snippets I come across. Perhaps readers can help me solve a few mysteries along the way!”

The Bulletin recently sat down with Dr Clarke to find out how the book project is progressing.

How does one even begin to write about 150 years of history?
The research has to come before the writing – though the blog is a good writing exercise for me. My first priorities have been to get a feel for what has already been researched and written about, and to start interviewing people. I think the bigger shape of the book will arise organically out of the research. Of course the biggest challenge will be fitting the long story of a large institution into a readable book – there is much that will have to be left out.

Why publish a blog alongside your research endeavours?
The History of the University Unit had a website, but this was inactive by the time I was appointed. I thought a blog would provide a place for some of the information on that website (notably a bibliography of publications about the history of the university). But I also wanted to create something a bit more interactive. I’ve had previous frustrations with receiving interesting new information on a subject after a publication was complete. I suspected a blog would be a good way to elicit material on a wide range of topics, and just to create some general interest in the project. It is also a handy tool for identifying photographs, and its statistics provide a handy guide to what people find most interesting (people who read blogs, anyway).

Is anyone assisting you with these projects?
I’m doing all the research and writing myself, but there are lots of people providing general support. I’m responsible to a committee chaired by Prof Barbara Brookes, which is most helpful. I’ve also greatly appreciated the support of the Hocken Collections, Alumni Office and History and Art History Department who have all taken an interest in the project – they also generously provide links to the blog on their Facebook and LinkedIn networks, which help spread the word. Staff and retired staff of the University I’ve approached about participating in interviews for the project have also been most helpful and interested.

What sources are you using for your research?
There’s a wide range of written sources, including archives of the University administration and of various departments, colleges and other parts of the University; official reports and statistics; and memoirs of individual staff and students. I’m also interviewing a selection of current and former staff, who can provide some of the more interesting stories behind the somewhat dry material in official archives. Images are another important source, and the book will have lots of those – I’m finding some images in the archives, and some of the people I’ve interviewed have also generously lent photographs from their personal collections for copying.

Is your research being used in any other way beyond the blog and book?
I’ve had a few enquiries from the Alumni Office and Marketing and Communications about specific matters relating to the history of the University, and have been able to help with those. Eventually the material I uncover that doesn’t make it into the final book will be deposited in the Hocken for future researchers to consult.

Are there any big mysteries you’re hoping University staff can help you with?
It’s still the early days of the project and I’m sure there will be many mysteries to come. I’ve put a few queries up on the blog in the hope of finding some answers, and will continue to do that. One thing I’m keen to find out relates to early Pasifika students at the university. The earliest I’ve found so far is Ratu Jione Dovi, a Fijian who graduated in medicine in 1935. I’d love to hear about any earlier students from the Pacific Islands.

What’s been your most fascinating discovery so far?
The highlight so far relates to fairly recent history. It’s the story of Helensburgh House, which was a ‘temporary’ University of Otago hall of residence from 1984 to 1991. It was located miles away from campus, in the former nurses’ home of Wakari Hospital, and provided accommodation at a time when the University was growing very quickly and very stretched for residential spaces. I wrote a little about it on the blog and received an enormous response – it has been the most popular post by a long way. Former residents put up comments or sent me their reminiscences about life as ‘Burgers’. As a result I interviewed the former warden, Glenys Roome (who was also the first warden of Hayward College). She and former residents are delighted that Helensburgh is being remembered.

Will your book be influenced by the previous Otago histories? How will yours differ?
The centenary history of the University is full of most useful factual information, but also notoriously dull. So the plan is that the new history will be rather more interesting and it will also include more images and a lot more about student life, not just changes in the administration. Sam Elworthy wrote an excellent history of student life at Otago (Ritual Song of Defiance, published 1990). That is a great model, but of course my history will have to cover much broader ground. There are also published histories of various parts of the University, and an earlier jubilee history, which are most useful sources for me. Some schools and departments have no histories at all, while others – notably the Medical School – have several. That is influencing where I concentrate my initial research. Dot Page interviewed many people for her recent history of the Medical School, so my priority has been to interview people from other parts of the university.

Do you think Otago students have changed over the years?
Many aspects of student life will never change – for instance, meeting the challenges and rewards of higher academic study, socialising with like-minded people and enjoying the new freedoms of adult life. But the make-up of the student body has changed enormously since the early years of the University. Though women were part of the University from the beginning, they accounted for fewer than one-third of students until the 1960s (with the occasional exception during war years). Since the late 1980s women have outnumbered men – in 2012, 57% of Otago students were female. Another significant change has been the growing number of Maori and Pasifika students in recent decades – the University was really a Pakeha preserve until well into the 20th Century. International students first became a force to be reckoned with in the 1950s with the Colombo Plan. Since then, they have grown enormously as a proportion of students. Overall, students are now much more representative of the wider community than they once were. Though cost and family background remain a barrier, many people now have access to university education – until the 1930s, many working class children did not have the privilege of a secondary education, let alone a tertiary one.

Will your book lean more toward the monumental events of Otago's past or to the day-to-day anecdotes of life at Otago?
I think both are important and a balance is needed. Books which focus on big changes sometimes neglect the important but easily ignored parts of an organisation’s life and culture – the things which have remained unchanged for generations.

Have you met in person with any living legends from Otago's past?
It has been my privilege to interview various interesting people involved with Otago in decades past. I have been concentrating on the older people first and have met some remarkable people in their nineties – Alan Horsman (English), Fred Fastier (Pharmacology), Jock McEldowney (Librarian), Gordon Parsonson (History), Gordon Parry (Administration) and Ann Wylie (Botany). I’ve also met ‘younger’ people in their seventies and eighties from various departments. All have had fascinating tales to tell. Perhaps the one that has seen the most remarkable changes is Brian Cox, who started out as an Otago maths student in the 1950s. After completing his PhD at Cambridge he returned to Otago as a maths lecturer. As he’d had a little experience with early computers in the UK he was asked if he’d take responsibility for Otago’s first computer. He retired as Professor of Computer Science in 2001, having witnessed an enormous expansion of technology over his career.