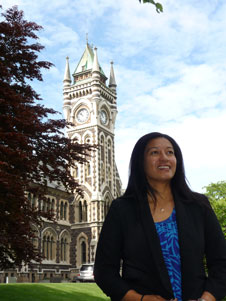 Otago’s first Director Pacific Development Dr Tasileta Teevale says her key role is to drive realisation of the goals set out within the University’s newly adopted Pacific Strategic Framework for 2013-2020.

Approved by the University of Otago Council in December 2012, the Framework was formally launched in July this year. Dr Teevale took up the Directorship in October.

Dr Teevale says, “my position was set up to monitor the progress of the Pacific Strategic Framework, which is the University’s response to its charter goals in terms of meeting the needs of Pacific peoples. The Framework sets aspirational targets for Pacific student achievement at Otago.

“The expectation is that Pacific students should achieve on a par with every other student. At the moment there is a bit of a gap compared to the rest of the student body – we are working to raise that level.”

Dr Teevale explains that all New Zealand universities are required to set such targets and report their progress publicly.

“My role entails monitoring all Pacific-related activities the University delivers in all areas – academic, services, curricula, research, staff development, international relationships, and so on.”

Dr Teevale has a broad background in academia and the public service.

"...to make a contribution at the very University which initially brought us to these shores, is very humbling."

Graduating from Otago in 1995 with a Physical Education degree, she entered directly into a lecturing position in Exercise Science at UCOL (Universal College of Learning) in Palmerston North. She also completed a Master of Business Studies at Massey.

“Academia called me back and I did my PhD at the University of Auckland, where I’ve been for the last eight years. I’ve just come from a Post Doctoral Research Fellowship in its School of Population Health. My research focussed on Pacific family and adolescent health.

“I am a Dunedin-ite,” she explains. “My family migrated from Samoa in the 1980s when my father received a scholarship to study at Otago. We left our Island shores for this very university.

“To be coming back to Otago and Dunedin now after 20 year's absence, to make a contribution at the very University which initially brought us to these shores, is very humbling.”