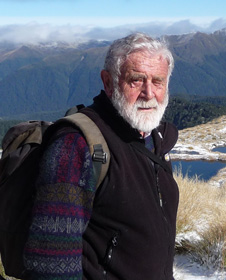 The University will tomorrow confer the honorary degree of Doctor of Science on one of New Zealand’s leading plant ecologists and conservationists, Sir Alan Mark.

An Emeritus Professor in the University’s Department of Botany, Sir Alan has worked tirelessly over more than five decades to ensure that science closely informs conservation efforts in New Zealand and beyond.

Vice-Chancellor Professor Harlene Hayne says she is delighted that he is being recognised in this way.

"Sir Alan is an inspirational figure, not only at Otago but much further afield. He is an excellent example of an academic who is an effective critic and conscience of society - one whose standing is grounded in leading research and is expressed through service to the community."

Born in Dunedin Sir Alan was appointed Professor of Botany in 1975, having first joined the department in 1955.

His career features many highlights, including being elected a fellow of the Royal Society of New Zealand in 1978 and awarded the Royal Society of New Zealand's Hutton Medal in 1997 for outstanding scientific research in recognition for his major contribution to the study of South Island vegetation. He also received the Charles Fleming Award for Environmental Achievement in 2010.

As one of New Zealand's leading plant ecologists Sir Alan has used that knowledge and background to bring a scientific approach to conservation. He was president of the Forest & Bird Protection Society and Chair of the Guardians of Lakes Manapouri, Monowai, and Te Anau.