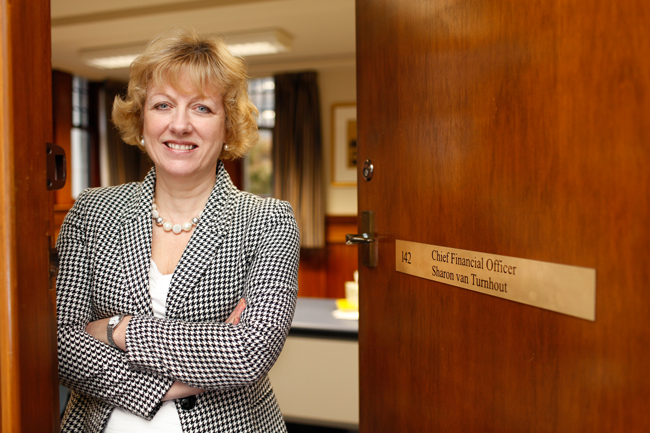 For Sharon van Turnhout her appointment as the University of Otago's new Chief Financial Officer has taken her life and career, thus far, on a full and interesting circle.

She took up the position on 31 March after returning from the United Kingdom where she had tackled a variety of roles in a range of sectors including health, transport and the IT field.

Born in Palmerston Sharon spent most of her school years in Dunedin and went on to study for a BCom at what was a very different Otago during the 1980s.

"I used to attend lectures in the Archway Lecture Theatres, which were pretty new in those days, but the rest of the University is just so different. It has a lovely feeling and it's great to be back."

"It is just completely different now - almost unrecognisable. I used to attend lectures in the Archway Lecture Theatres, which were pretty new in those days, but the rest of the University is just so different. It has a lovely feeling and it's great to be back."

Sharon attended University after having started working as a clerical cadet at the Otago Education Board who decided to pay for her to study part-time. She later moved to the New Zealand Salmon Company where she had her first taste of working as a management accountant with a relatively new company that was expanding and diversifying its operations.

"That really set for me the path for my career. I become very interested in the operations of every organisation I'm involved in – so I've never been a sit behind the desk accountant."

Sharon decided to do her big OE in the United Kingdom, landing a job with what was then the Public Health Laboratory Service.

After a few years she joined the newly formed National Blood Service, which had been formed out of the amalgamation of regional services. She found herself working closely with the Director of Finance in what was really a project accountant role, including running a working party, to develop and refine a single accounting system for the whole service.

There were many other one-off projects to do as well while there and Sharon says she often describes her career as a series of projects.

After 10 years she decided to move, taking on some temporary roles, including working with a small start-up, setting up finance and accounting systems.

Her next major role was as a corporate accounts manager with Transport For London (TFL) where she was involved in the restructuring of finance and accounting services, creating a centralised finance function which she headed.

After six years she moved into the IT sphere for TFL, heading the commercial department which outsourced a whole range of IT functions, and she also ran the projects management office.

When Sharon left TFL she took on some short-term roles before working for a brand new start-up Cell Therapy for 18 months before deciding then to come home to be closer to family.

"I was absolutely delighted at the time to see this role advertised by the University. It came along at exactly the right time for me."

The challenges for her now are getting to grips with not only Otago but the tertiary sector in which she has never worked before.

"... when you contrast our quite tight operating surplus with that desire to have an ambitious capital programme without taking on debt, then how do we fund that? That is definitely one of the challenges ahead."

"That's a recurring theme for me. Every time I've changed jobs I've gone to a completely new sector which I think, for me personally, is about the fact that I enjoy a challenge and learning new things," she says.

Sharon is relishing the financial challenges, such those posed by changing roll numbers and the University's massive capital programme.

"Funding that is going to be a challenge. Traditionally we have had a very strong financial base, which is testament really to the good management of people in the past, and we've never had any debt. So when you contrast our quite tight operating surplus with that desire to have an ambitious capital programme without taking on debt, then how do we fund that? That is definitely one of the challenges ahead."

Sharon is also excited about being back in Dunedin after 25 years.

"I've noticed enormous changes and changes for the better. There's a really vibrant culture, with active professional theatre and wonderful art galleries. There's a lot to do in such a small city and the stadium is a magnificent facility for a city of Dunedin's size," she says.

"The cafe culture - the food. Fantastic! In London of course you can eat very well if you pay a lot of money but for the average everyday citizen it is a bit humdrum. Here the food is of exceptional quality and variety, so that is something I have thoroughly enjoyed since I've got back. Dunedin has got a lot going for it."