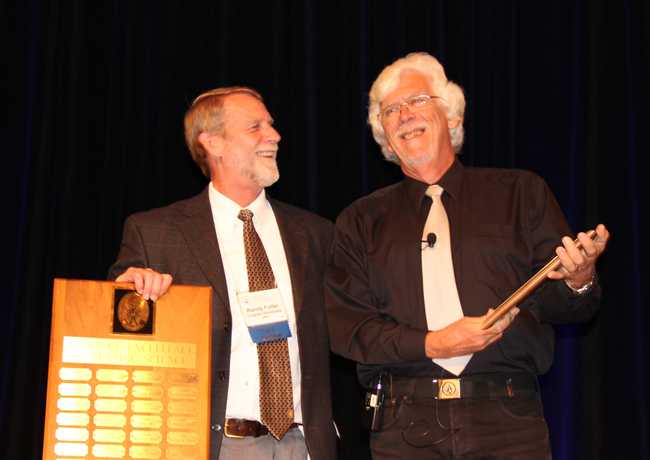 New Zealand's rivers are a taonga (treasured thing) and we need to work collaboratively to ensure that they are sustained and improved for the sake of future generations.

So says Professor Colin Townsend of Zoology, who has this month received the 2014 Award of Excellence of the Society for Freshwater Science, the leading international body with a focus on stream ecology.

Professor Townsend received the award this month at the Society’s conference in Portland, Oregon, where he also gave the plenary address.

The award recognises his research contribution to freshwater science, especially the ecology of streams and rivers and also his role as editor-in-chief of the leading international freshwater journal Freshwater Biology.

“I was surprised and delighted when I learned of the award because the Society for Freshwater Science has been so central to my career, and those deciding the award are the colleagues I respect the most.”

“We need to act now to improve and sustain the health of our rivers and to ensure that farming best practices are widely adopted.”

He has also co-authored or sole-authored three successful ecology text books, adopted by universities around the world and translated into nine languages.

For more than 30 years he has been co-editor in chief of the international journal Freshwater Biology.

He is a Fellow of the Cawthron Institute and Fellow of the Royal Society of New Zealand. In 2007 he received an Exceptional Lifetime Achievement Award from the British Ecological Society.