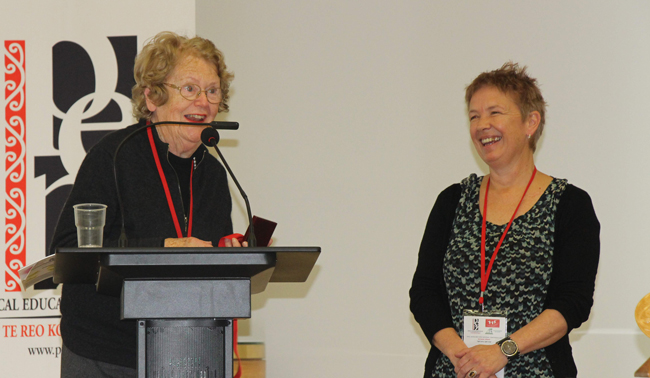 She is the second woman and one of just 10 people to receive the award since its inception in 1967.

"My aspirations are to encourage aspiring teachers to think about the diverse kids, bodies, interests and needs that present themselves in PE classes and teach in ways that celebrate these differences."

Her research focuses on understanding the place and meaning of health and physical culture in young people’s lives.

She says Sir Alexander Gillies was an extraordinary man and to receive something with his name on it was very humbling.

“His widow, Lady Joan Gillies, actually presented the award which made it even more special. I guess it was the fact the medal came from PENZ – an organisation I’m passionate about, that made it really special.”

“Movement is central to human life – it’s our way of connecting with others, with objects, with the physical and the social world.”

Yet, she says, PE makes both friends and enemies of children in schools.

“I’m interested in encouraging potential teachers to ‘imagine’ what PE is like for those that aren’t as happily disposed toward the subject as they are. My aspirations are to encourage aspiring teachers to think about the diverse kids, bodies, interests and needs that present themselves in PE classes and teach in ways that celebrate these differences. I am relentlessly keen to see the ‘education’ in Physical Education highlighted.”

Former President of PENZ Bob Stothart, who presented the Medal, says Associate Professor Burrows embodies the intentions of the award.

“Her work on inclusion, gender, health, obesity, developmental discourses in school-based physical education and issues of school justice have been recognised both nationally and internationally.”

Associate Professor Burrows is on the editorial Board of Sport Education and Society and editor of the refereed section of New Zealand's Physical Educator. She is President PENZ and a member of the Australian Association for Research in Education (AARE), the North American Society for the Sociology of Sport (NASSS) and the British Educational Research Association (BERA).

About the Sir Alexander Gillies Medal:

The Sir Alexander Gillies Medal is the highest honour that PENZ can confer on an individual member. This award is gifted to someone deemed to mirror the commitment and qualities of Sir Alexander Gillies, the first patron of the original New Zealand Physical Education Society.