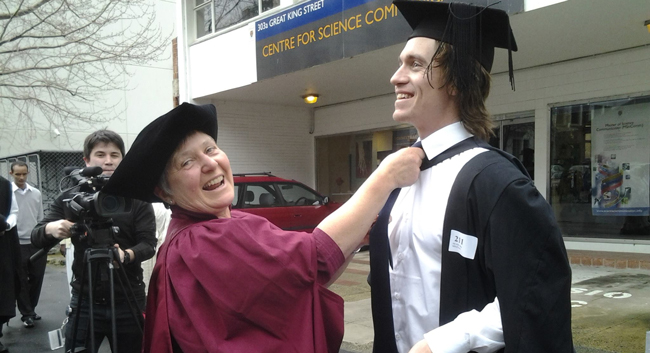 Jean Fleming with one of her graduating students, Adam May.

Despite retiring from the University of Otago and her role in Science Communication, Professor Emerita Jean Fleming remains as passionate about science as she has ever been during her four-decade-long career.

“As a reproductive biologist, I still have a review paper that I want to write about the origins of Ovarian cancer,” she admits.

“It’s something I’ve always wanted to do – it’s there, but I need to find the right time to do it. It’ll come.”

Not that Jean is sitting on her hands. Since officially retiring from teaching at Otago in February this year, she has submitted four different science communication papers in collaboration with students.

"Science Communication was a breath of fresh air for me. I enjoyed the students and pushing my own boundaries, as it was so different."

She is working with past students to convert research in their MsciComm theses into research papers. This helps to boost the research output of the Centre for Science Communication, as well as launching the students’ research careers.

When it comes to science communication, Jean literally walks the talk. In 2008, she was lured back to Otago (after a three-year period at Griffith University in Australia) as Professor of Science Communication at the University’s then new Centre for Science Communication. Six years later, she looks back on what she has achieved, both at the Centre teaching students, and in her research and advisory roles, and feels satisfied.

“Science Communication was a breath of fresh air for me. I enjoyed the students and pushing my own boundaries, as it was so different,” she says.

After decades of scientific research work, first as a Victoria University biochemistry graduate working at Cambridge University on a study into Huntington’s disease, then in endocrinology at AgResearch, and finally in reproductive biology as a health science academic and researcher at Otago, the science communication role from 2008 pushed her boundaries.

“It was so different; it made me think – “How do I teach this stuff?” So I drew on expertise within the wider University community, learnt interview technique skills, and how to do surveys – and it opened my eyes to a completely different world.

"I caused a stir when I said I’d love to see GM insect-resistant vegetables in my own garden, that you could grow and eat spray free."

Jean understands the power of good communication better than most, however. In 2000, Jean was the only New Zealand scientist appointed to New Zealand’s Royal Commission on Genetic Modification (RCGM). The Commission’s 14-month inquiry was regarded as the most extensive yet to be held anywhere in the world.

“I spent my birthday in 2001 trying to work out the possible dangers of ‘horizontal gene transfer’. We found people were really angry that GM food had been introduced into New Zealand without the public knowing. It wasn’t the science under scrutiny, so much as control of our food. We decided each GM case needed to be decided on its own merits.

“I caused a stir when I said I’d love to see GM insect-resistant vegetables in my own garden, that you could grow and eat spray free,” she remembers.

The RCGM also recommended the promulgation of a bioethics council – a regular forum at which GM and other new technologies could be discussed.

“The public could contribute their views – and this is the key to good science communication, because it is two-way. It was democracy at work,” she says.

She regrets that the bioethics council has been abolished under the National Government.

Jean was also involved with 10 of the University of Otago’s annual “Hands-on Science” Schools, five as convenor.

"I’ve learnt not to try talking about anything I don’t know about, because you’ve got to get it right."

Hands-On Science gives promising high school students from around New Zealand a week of practical experience in research science. This led to her involvement with the first New Zealand International Science Festival (NZISF) in 1997, leading the Programme Committee. She has been a member of the NZISF Executive ever since.

As a result, she was awarded a life membership of the NZISF in 2012. In addition to this recognition by the festival, Jean holds a number of prestigious awards and honours. Her efforts in bringing science to the public attention led to the award of a Suffrage Medal in 1993, a silver Science and Technology Medal from the Royal Society of New Zealand in 1998 and an ONZM for services to science in 2002.

Walking the talk, Jean herself is still a science communicator post retirement, as a regular guest on Brian Crump’s National Radio show on Thursday nights from 8.40pm till 9pm, just before the science programme Our Changing World.

It’s been six years now and Jean still does the radio show, and still “gets nervous before each one”.

“I’ve learnt not to try talking about anything I don’t know about, because you’ve got to get it right. Currently, I’ve been talking about cancer – I want to give people an idea of what sorts of treatments are on the horizon. Next year I’m planning a return to talking about the less known body parts….I’m finding I have quite a following out there.”

Two other international appointments have also recently been made to the Otago Centre; Jesse Bering, who came from the US to take up an Associate Professor role, and Dr Fabien Medvecky, formerly of the University of Queensland, who joined as a Lecturer this month.

Associate Professor Bering was Director of the Institute of Cognition and Culture at Queen’s University Belfast from 2006 until 2011, after which he returned to the United States to become a full-time author and science writer. He has written three books and contributed to a number of publications including Scientific American, Slate, New York Magazine, The Guardian and The New Republic.

Vice-Chancellor Professor Harlene Hayne says she is delighted the three are joining the Centre for Science Communication.

“This leading Centre provides the largest science communication programme in the world and it’s exciting to see it attract new academic staff of such high calibre. This bodes well for Otago to continue to lead the way internationally in a discipline crucial to ensuring public understanding of, and support for, scientific endeavour.”